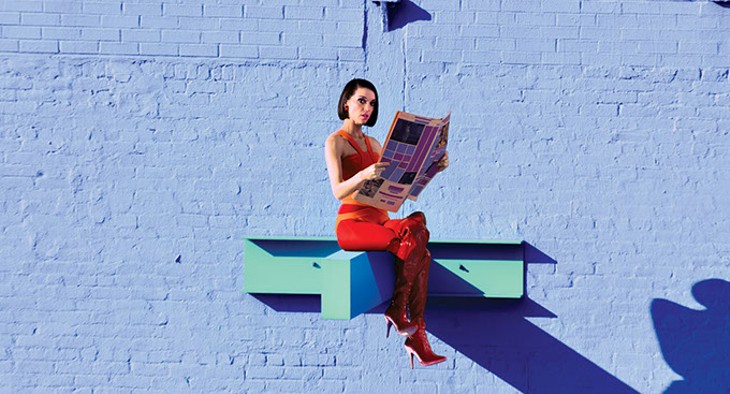 This reviewer noticed two things during a quick gloss over the Metacritic page for the new album Masseduction: a well-earned abundance of glowing reviews for Tulsa-born Annie Clark’s sixth studio album under the St. Vincent name and targeted advertising promising to reveal the “Top 3 Bipolar Treatment Methods” upon a single click.

Assuming the latter is not a revealing insight into a certain someone’s private search history, one could logically conclude that words and phrases from the online review aggregator’s Masseduction page were used to prompt the ad.

It’s not an abstract theory. The follow-up to St. Vincent’s Grammy-winning 2014 self-titled LP presents listeners with a broad variety of sounds and styles ranging from intimate singer-songwriter to pulsating techno and ambient noise. While it is hard to label Masseduction in any one particular genre or tone, the result is more like richness of character than a personality split.

As cliché as roller coaster comparisons can be, the front end of this album is a true sonic thrill ride. “Pills,” a statement on modern medicated society, features a maddening but glorious sing-songy melody that feels like something lifted out of the dark, Bizzaro version of Disneyland. The song is somewhat surprisingly co-produced by rapper Kendrick Lamar’s right-hand studio collaborator Sounwave. But perhaps the pairing should not be a shock, given the beatmaker’s propensity for sonically fitting narrative and thematic song concepts.

The following title track features Clark’s ripping guitar to form a standout banger on an album full of them. “Sugarboy” ratchets up the beats per minute and grows until exploding into industrial discord. It makes sense given the context of the lyrics, which seem to be about one-upping one’s actions to further extremes to please another.

Masseduction comes in with a fury and sets the stage for the project’s greatest earworm, “Los Ageless.” The song appears to be intended as a complement — or perhaps foil — to “New York,” the album’s leading single. Both songs are about heartache but approach the topic in very different ways. “Los Ageless” is big, gritty and anthemic while “New York” is stripped down and more rawly emotional.

Clark saves her most emotive tunes and her best songwriting for the tail end of Masseduction. “Slow Disco” won’t leave many dry eyes, as tender violins lead into a somber last hurrah. The album closes on “Smoking Section,” which is simultaneously beautiful and hauntingly distraught. “And sometimes I go to the edge of my roof,” the song’s dark, poetic lyrics go. “And I think I’ll jump just to punish you. And if I should float on the taxis below, no one would notice, no one will know.”

Word that Clark would head into a poppier direction on Masseduction concerned some fans, especially given the success of her last record and increase in popularity. But, with no small thank-you to producer, fun. guitarist and pop genius Jack Antonoff, who helped guide this stellar effort, Clark proves that her talent and creativity transcend style. With Masseduction, St. Vincent shows there is no shame in duplicity.