While OKC may have as many excellent craft breweries as Tulsa does, one of the benefits of how the latter city is designed is that you can make a brewery crawl on foot between many of them. There’s loads more to say about these breweries and others (we haven’t forgotten you, we promise), this is a great starting point for the flavors Tulsa has to offer. While most people will make two to six trips out of this list, if you have an unquenchable thirst and a good pair of walking shoes, this entire trek comes in at just under two miles of walking distance.

We start at Eerie Abbey Ales for two reasons: one, it’s a good westernmost starting point and two, if we started east to west and ended here, you might end up passing out on the sidewalk. While leaning heavily on the “abbey” for its branding, Eerie’s namesake is actually the Belgian style of heavy, yeast-laden ale. While its fans are diehard, a brewery dedicated to this style is certainly rare, not just in Oklahoma but in the country, so it’s definitely worth a stop. Single, dubbel, tripel and quadruple are exactly what they sound like and the ABV of a strong abbey ale routinely tops out in the double digits. For this reason, treat carefully as each pour goes far. The signature ale, The Abbot, and its variations are a great place to begin. This quad, brewed with sugar, makes it deceptively easy to drink considering its 10.5 percent ABV. Your options are either to start and end here or to have an Abbot and something lighter, like the Pater (a single abbey ale) or The Confessional (a witbier) which are both around 5 percent alcohol and move on. 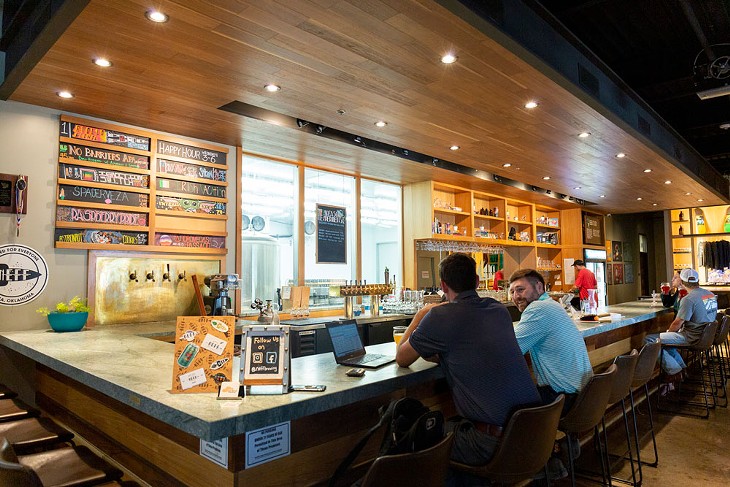 New Era Fine Fermentations has a story as great as its beers. Founded by a father and son team after the latter was diagnosed with celiac disease, the Neffs set out to make gluten-free craft beers that can keep pace with the rest of the pack and they have succeeded wildly. Their slogan, “beers for everyone” hits the nail on the head. For a simple comparison, go with the Apollo Blonde. For a stellar beer, go with a Raspberry Pride, another flagship ale. Their “Area 51 experiments’’ slate is also worth a shot, especially if you can get your hands on a glass of the Planetary Cherry or the Ancient Ale-iens Series 1: Gruit Beer, an ancient Chinese gruit (brewed without hops) beer recipe made from millet, rice, and buckwheat that is flavored with mugwort and wormwood before it goes through a secondary fermentation with grapes. This is a good secondary destination while still getting your wits about you from Eerie. Bonus: the taproom has a food menu, but COVID has limited it for the time being. 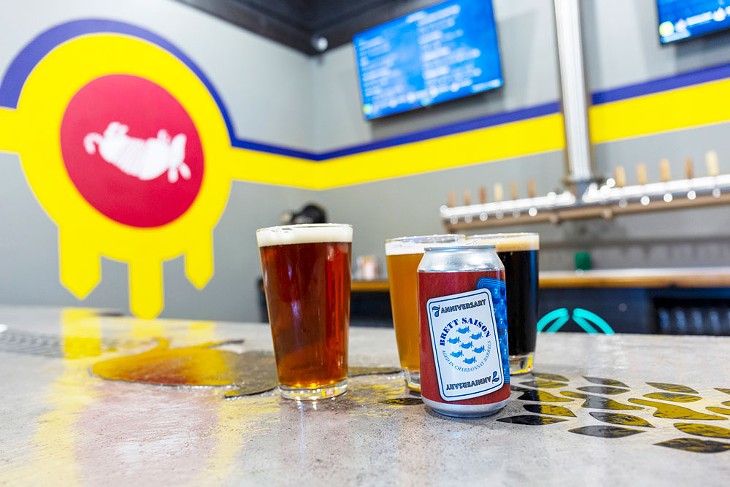 If you’ve been drinking craft beer in Oklahoma for any time at all, the money is on the bet that you’ve had at least one six-pack of Dead Armadillo’s Amber in your fridge. But, like the book is always better than the movie, you have to try a draft before you can say you’ve truly tasted the beer. While packaged offerings like the amber and Tulsa Flag make it seem like the rest of the taproom offerings may also be fairly straightforward, beers like the Peanut Butter Chocolate Frogs and the Raspberry Ganache, both serious and seriously tasty pastry stouts. A tip passed onto us from a bartender that we will pass onto you: mix those two pastry stouts together for a liquid peanut butter and jelly sandwich. You also shouldn’t pass up either of their current anniversary offerings: the 7th Anniversary Brett Saison is a crisp, clean farmhouse ale and the 8th anniversary a sour porter, which somehow works. Rumor has it there are still some previous anniversary ales around but you’ll need armadillo-piercing ordinance to get to them.

Nothing’s Left was the unfamiliar stop on this brewery trek, but was a most pleasant surprise. The flagship beer is their Strawberry Blonde, a blonde ale brewed with, you guessed it, ripe strawberries. The coffee stout is one of the most delicious coffees or stouts you’re likely to taste and the Smōk tastes just like it sounds, but these have reportedly already been cycled out for some things we missed (dammit) but will be back to try, namely the Cotton Candy Chaos milkshake IPA (made with cotton candy flavoring) and the Yabba Dabba Brew, a fruited sour made with Fruity Pebbles. In addition to its wildly diverse offerings on draft, the Mountain Dew beer slush, another unknown quantity before this trip, is something you have to at least taste once. Make sure to take some Salted Watermelon Crusher or Deez Nuts home with you too. Their motto is “we brew weird beer” and they live it.


At this final fork in the road, you had probably better choose one or the other of these, but we’re not the cops and we’re not going to tell you what to do because both offer exceptional flavor while maintaining completely different vibes. At the same time, both are delicious dessert options after the multiple-course malt meal you’ve already consumed.

Hops haven’t been given much attention on this brewery trek, but if you’ve missed IPAs, then you should start with a Trail Magic Hazy IPA or a Huntman at Cabin Boys. It’s just around the corner, so keep an eye out for their Oktoberfest brew, which should be hitting shelves before long. It’s definitely one of the best marzen/festbiers brewed in the state. As a final drink for the night, the Quint’s Revenge Shark Bite kolsch is candy in a glass. Brewed with spiced rum simple syrup, blue curacao, sweet ‘n sour and grenadine but coming in at a very reasonable 4.5 ABV, it rounds out this drinking session perfectly.

I see you’ve chosen expert mode for your finale. Very well. In keeping with the dessert theme for the final stop, it must be said that the Mango Boom Boom was the favored flavor for the crew who made it to the end of the line. It’s an imperial gose with mango, coconut, lime, marshmallow, vanilla, milk sugar and sea salt with a deceptive taste for a beer clocking in at 8 percent ABV. The other strong taproom option for a finale is the Ice Cream Socially Distant, which comes in both Ice Cream and Toppings varieties. Both are imperial stouts with both vanilla and chocolate. The Ice Cream also has strawberry and banana while the Toppings contains caramel, coconut, hazelnut and marshmallow. A flight is available of a little of both of those, a 50/50 mixture and an empty glass to pour your own mixture. Even if you’re still standing after downing this 13 percent ABV concoction, you’re done.