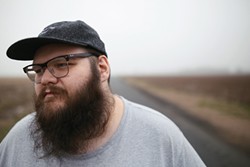 There’s a neon sign that says “Big Bad Luv” — literally, it turns out.

John Moreland, the Tulsa-based hardcore punk rocker turned folk-country crooner whose songwriting chops have wooed the nation, uses a description of the sign to add a layer of realism over the raucous bar that acts as the setting for his song “Sallisaw Blue.” The sign in the song is also the namesake for Moreland’s album Big Bad Luv, released in May on the star-studded indie label 4AD (its current acts include artists like Ariel Pink, Grimes, The National, Purity Ring and Tune-Yards).

Moreland is set to perform Dec. 2 at Tower Theatre, 425 NW 23rd St. The date comes less than three weeks before Steve Earle & The Dukes, whom Moreland often cites as one of his earliest country influences, is set to play his own gig at the newly renovated venue in the Uptown 23rd District.

On “Sallisaw Blue,” which is the opening tune to Big Bad Luv, the songwriter presents listeners with a rockier and edgier sound than is found on the more reflective later tracklist. It’s a fun and energetic song — so fun that one can’t help but wonder if such a bar as Moreland describes really exists somewhere.

Moreland, in a recent interview with Oklahoma Gazette, said he did not write the song with any particular place in mind. He was not inspired by an actual neon sign somewhere, but after the record came out, he did order a replica sign from a neon company based in Austin, Texas. It can be seen in the music video to “Sallisaw Blue.”

The album’s title and sign verbiage were actually inspired by the book Big Bad Love by Larry Brown.

“It was sitting on my coffee table when I wrote that song,” Moreland said.

Though he is glad he had it made, Moreland is not sure what will ultimately become of his custom sign.

“We haven’t really done anything with it yet because it came mounted on this plastic backing that’s kind of fragile, as it turns out,” he said. “We’re kind of figuring out what to do with it and if we need to get it remounted with some stronger backing. But we’ll figure it out.”

Bearded and tattooed Moreland regularly defies what one would expect from one of country music’s greatest songwriters. Did Townes van Zandt, for example, ever collect sneakers? Probably not (but, to be fair, he was born three or four decades before shoe subculture would become the engrossing pop culture force it is today).

Moreland has collected sneakers on and off for many years. As of now, he’s off. The singer goes through phases where he collects obsessively for a while then stops himself cold.

“It sort of makes me feel gross, like the rabid consumerism of it,” he said. “So I end up getting rid of a bunch of them, and then I start all over again.”

Moreland also sees how it is healthy to indulge in an obsession every once in awhile. Sneaker culture is fun, and it is a good way to express yourself. Moreland is also a big fan of basketball, cheering for the Oklahoma City Thunder and following the National Basketball Association (NBA) in general.

But it can be hard for a prodigious songwriter to make room for more than one passion. Moreland said he often uses sneakers as a distraction, one that must occasionally be blocked.

“It’s hard to focus on writing songs and everything else when I can’t stop reading sneaker websites all day,” he said. “So I have to make myself pull back from it at times.”

Moreland is often labeled as alt-country’s king of the melancholy. It is true that a lot of his songs are about heartbreak and pain. But it would be an unfair oversimplification of Big Bad Luv to call it a sad album. In a way, it shows resiliency, or at least an acceptance of life’s inevitable strife.

The songwriter says it best on “Sallisaw Blue,” singing, “It’s no use. God bless these blues. Let’s get wrecked and bruised and battered.”

Moreland said he agrees that he is too often labeled as sad. He does not see himself as a sad person, just more of a thoughtful one who is open with his emotions.

As for whether Big Bad Luv should be called resilient, Moreland said it is not up to him to say.

“I honestly don’t think about that stuff too much,” he said. “I just write stuff and keep whatever feels good.”

Moreland might owe part of his career as a musician to a move his family made when he was a child.

The songwriter was born in Texas but moved to Kentucky when he was just 1 year old. Moreland spent his earliest years there, but his family moved to Tulsa when he was 10.

“I was bummed out that I was losing all my friends — pretty normal thing for when you got to move when you’re a kid,” he said. “But when we moved is when I started playing guitar, too. Probably because I didn’t have any of my friends anymore. So it turned out to be a good thing.”

Moreland started writing his first original songs around the same time. But he was doing it less as a young music prodigy and more as a workaround for his lack of polish.

“I wasn’t a very good guitar player yet, and I wasn’t good enough to figure out how to play other songs,” he said. “So, I’d kind of make up my own, because you don’t really have to know how to play it. You can’t really play it wrong.”

Obviously, Moreland is now skilled enough to cover plenty of existing tunes — including hits from his all-time favorite Tom Petty. But, thankfully for us all, he still finds the time to write and perform those songs of his own.

Moreland has lost count of how many tattoos he has now. He got inked for the first time in his early 20s, getting the letters spelling “Oklahoma” scrawled across his knuckles.

“I knew what I was doing,” he said. “It was time to go ahead and get that whole ‘ruin your life shit’ over with.”

Even following national tours and television appearances, Moreland has never stopped showing his love for Oklahoma. His Tower Theatre show will be his last gig of the year before breaking for the holidays.

“The last few years, I haven’t really played Oklahoma much, and when I have, it’s like at the end of the year,” he said. “So it’s always a nice winding-down of the schedule and a homecoming-type thing.”