First-time restaurant owner Azim Akhtar thinks about the online reviews for his Fusion Charcoal Grill with enough frequency that there are times it wakes him up at night.

This was the case the first time a reviewer on Facebook gave the restaurant less than the maximum five stars. Much to his chagrin, the 3-star review was not an indictment of the food.

“I had just woken up and noticed our average dropped to 4.9,” Akhtar said. “When I saw that they said it was because of the ambiance, I was like ‘Seriously?’”

For Akhtar, the idea that someone would enjoy the food but lower a rating based on atmosphere is hard to comprehend.

“We try as hard as possible to make this a personal experience for every customer,” Akhtar said. “You go to a restaurant to eat, so if the food is good, that should be the primary focus.”

The restaurant at 3604 N. May Ave. has been a variety of Middle Eastern-inspired eateries over the years. It was originally Shish Kabob and then Taste of Egypt before it became Istanbul Turkish Cuisine.

Akhtar, 31, got his start as an entrepreneur with a car dealership business in Dallas. He left that industry and bought a few commercial properties in Oklahoma City, where he has visited family frequently over the last 20 years.

Eight months ago, he saw that Istanbul was for sale, and he began to think about the growth he had seen in Oklahoma City over the decades while visiting family.

“The idea of buying the property and serving good Pakistani food pulled at me,” he said. “We have come quite often to visit my family, but we never go out to eat because our food at home is way better.”

Akhtar pulled the trigger on the restaurant and moved to Oklahoma City from Dallas in April 2017. For the first two months of restaurant ownership, he kept the name and menu unchanged, not wanting to drive away loyal customers.

After the end of the school year, his wife Huma and children moved up, and the two went to work in the kitchen. They had to perfect family recipes for Pakistani dishes but also learn the restaurant’s Turkish menu.

“It was a fun experience,” Akhtar said. “We saw what we could do better from a production standpoint. We make everything fresh every day. We only prep enough to serve, rather than throwing stuff away at the end of the day.”

Entrees at Fusion are cooked either on a charcoal grill that is enhanced with mesquite wood or in a brick oven. Marinated kebabs, both Turkish and Pakistani variety, cook on the grill while personal pizzas made out of two layers of pita bread dough cook in the oven.

Akhtar said he’s proud of the fact he is the only restaurant in the city to offer halal beef pepperoni and sausage.

Akhtar kept the Turkish menu from Istanbul and supplemented it with an array of Pakistani items. He said the most popular is lahori chargha, a yogurt-based marinade that gets a spicy kick from a variety of chili and masala powders.

It cooks on a skewer, which allows extra fat to drip off, making it healthier than if it was cooked in its own juices.

“[We offer] a different experience, and it’s a more natural way of cooking,” Akhtar said. “You can’t grill at home every day, can you? I guess you could, but it could be a hazard.” 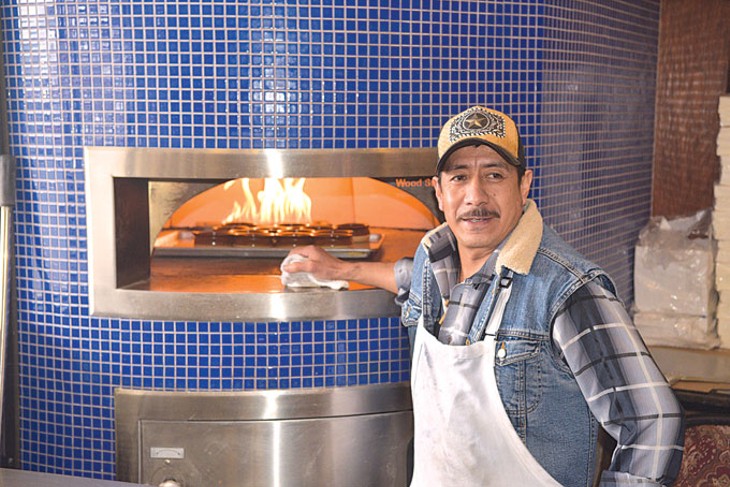 Other Pakistani recipes include seekh kebab, minced chicken or beef given a kick with ginger, lemon, coriander, cumin and garam masala powders. Malai boti, chicken korma and beef and chicken tikka are a few of the other Pakistani additions.

Akhtar said he felt compelled to add Indian classic butter chicken to the menu because he felt he had yet to have an authentic version in the city. He said he made butter chicken over 100 times before he got it the way he wanted, noting that an authentic recipe should have ground cashews in the curry paste.

“It’s gotten to the point that food business is not about soul food. … There are shortcuts and ways to make people think you’re having authentic dishes, like putting ketchup [in curry],” he said.

Akhtar said that business has increased each of the last three months and it’s a trend he hopes continues into 2018. He and his wife prepare food and serve tables with help of one full-time staff member in the kitchen.

He hopes increased business will help lead to aesthetic upgrades to placate the one review below five stars. He has also toyed with adding a buffet or a weekend brunch menu, but he said he will only do so without sacrificing quality.

“People go out to eat to enjoy food. This is an entertainment business,” he said. “If I can’t entertain somebody’s palate, then there is no reason to have a restaurant.”