It is ironic that art and beauty are often fashioned as a response to struggle and adversity.

Legendary jazz composer John Coltrane recorded one of his genre’s exemplary masterworks, 1965’s A Love Supreme, in one session in December 1964. President John F. Kennedy was assassinated just one year earlier. The United States was engaged in an increasingly unpopular war overseas in Vietnam. Domestically, Martin Luther King Jr. had finished his March on Washington and was preparing a fight for voting rights in the South.

Coltrane sought his own form of liberation. The saxophonist made his name playing with Miles Davis in the 1950s, but a dependence on alcohol and heroin earned him a reputation as a wildcard. Davis fired Coltrane after a 1957 show, an event that helped motivate the musician to seek sobriety and religious revitalization.

A Love Supreme is a 33-minute, four-suite spiritual ascension of a jazz album. David Balakrishnan, violinist and founder of the two-time Grammy-winning string ensemble Turtle Island Quartet, said in a recent interview with Oklahoma Gazette the album was among the first to bring the idea of modal improvisation to the forefront of Western jazz.

“The music is operating on a level of brilliance that is undeniable,” he said.

Balakrishnan and Turtle Island perform A Love Supreme — The Legacy of John Coltrane Dec. 1 at Edmond’s Armstrong Auditorium, 14400 S. Bryant Road. The acclaimed violinist and jazz musician said when listening to A Love Supreme, famous in part for its inclusion of Coltrane’s entrancing chants, there is a sense that the composer is rising above music and into another realm. The piece explores what it means to be human.

“I know that sounds dramatic, but that’s really how a jazz audience feels about that recording,” Balakrishnan said.

Balakrishnan founded San Francisco-based Turtle Island jazz quartet in 1985. The group was one of the first string quartets to find a large-scale market using improvisational jazz techniques. It has earned two Grammy awards for Best Classical Crossover Album, once with 2006’s 4 + Four and then again in 2008 for A Love Supreme: The Legacy of John Coltrane.

Balakrishnan is the only remaining performer from the quartet’s ’08 album.

“That recording was very important for us, and the music is very important to us because it actually allows us a framework for the members to really push their skill level as improvisers,” he said.

Though it has been more than eight years since that release, Turtle Island is anything but stagnant. A younger lineup still tours the world performing tributes to Coltrane and other jazz greats.

Turtle Island’s other players include violist Benjamin von Gutzeit, violinist Alex Hargreaves and cellist Malcolm Parson. What separates Turtle Island from other string quartets that might occasionally play jazz is that these performers are, first and foremost, jazz musicians and talented improvisers. The other members, two of which are in their 20s and one in his 30s, are also much younger than 62-year-old Balakrishnan, who said he feels paternal in his role.

“They keep me up at night,” he said. “There’s so much energy, and it’s awesome; I have a great life.”

The Love Supreme program keeps fresh, too. The show is far from a note-for-note rehash of the recording. Balakrishnan said the first half of the program is reserved for general, sometimes entirely original, material from the quartet. The group also offers nods to other jazz greats like Davis and Charlie Parker. The night’s second half is a full tribute to Coltrane.

All the while, the quartet’s players will be doing their own improvisation, meaning no two nights are alike. Turtle Island plays the material from its Love Supreme release, but it’s always flavored in a new way.

“Part of the jazz tradition is what feels right in the night, which makes it a little hard to talk about in advance,” Balakrishnan said. 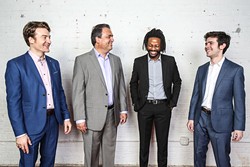 Turtle Island prides itself as a quartet that gives credence to the masters of American music in a classical world that spends a lot of its time celebrating Europe’s historic greats. That means more than listening to American composers like Aaron Copland or George Gershwin or even jazz greats like Coltrane.

Balakrishnan said musical genius is present in all genres and is worth representing in the classical realm.

“One of the cool things about Turtle Island is not only are we playing jazz in a string quartet, but it also opens up other doors,” he said. “We covered the music of Jimi Hendrix at one point.”

While the quartet’s members are all jazz musicians, Turtle Island usually finds its best audience away from loud jazz clubs and inside classical music halls, where they deliver relatable versions of jazz greats to crowds that might be unfamiliar with that sound.

Balakrishnan said one of the things he strives to do is fuel a crossover between classical music and other American music.

Turtle Island prides itself in being more than a string quartet performing a one-off parlor trick. Jazz music is Balakrishnan’s life and livelihood.

A Love Supreme — The Legacy of John Coltrane