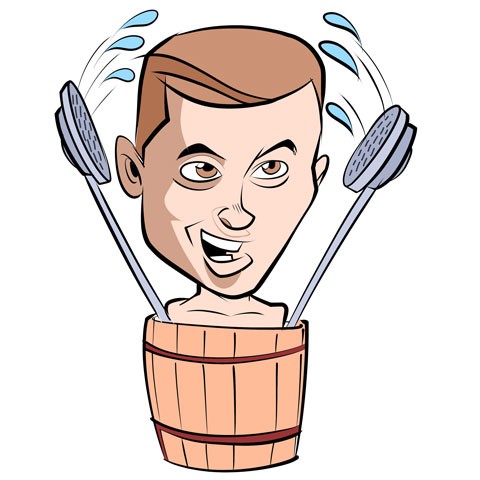 What does one do to cure boredom in Edmond? Why, totally revamp your shower setup, of course!

As recently featured on KFOR’s venerable Is This A Great State or What? series, Edmondite Garrett McCurrach recently went all Tim “The Tool Man” Taylor on his home shower after coming home from vacation in Canada and experiencing the dual-headed shower in his luxury hotel suite. Being simultaneously sprayed from front and back was a revelation in luxury.

“I got home,” McCurrach told Channel 4, “and it felt like I was taking half of a shower.”

Wow! What a problem! Or as The Tool Man might say, “Uuuuggghhrraahh?????”

McCurrach knew he had to remedy the situation, so he took off for Home Depot right away. With a little time and craftiness, he was able to attach a garden hose to the neck of his original showerhead and channel it through a hollow shower rod to a new showerhead at the other end.

He loved his new shower rig so much that he had to call up his friend and business partner Drew Bellcock to tell him to check it out.

“I walked into his bathroom, and it was like, literally, a garden hose taped to the shower,” Bellcock said. “I thought, ‘This is the stupidest thing.’”

But a simple spin through McCurrach’s home improvement project made him a believer. The two have now quit their jobs to take their Hydra Shower rig to market. McCurrach and Bellcock will launch a Kickstarter campaign for their new product soon.

Some of you might be wondering why this was a story on the nightly news. Sure, Oklahoma has prisons packed like sardine cans and students using textbooks from back when Blake Shelton still thought girls had cooties, but doggone it if every story has to make us feel bad.

A guy went on vacation, felt something great, came back and replicated the experience on his own in a do-it-yourself fashion. And now he might make a buck off of it. Who says the American Dream is dead? If the Founding Fathers did not want us to live in a country where its people could invent a luxury shower rig at a basement-level price point, then our understanding of this nation’s principles is profoundly wrong.