Twister Fest storms into Chickasha with music and good vibes 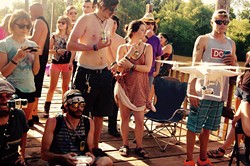 As far as music and camping festivals go, this one is a true value at $20 for day passes and $35 for festival passes.

Ben Ellis, bassist and backup vocalist for Lawton-based rock band Snake Oil, performed at last year’s festival and said it is one of the best music events he has been to.

“It’s a great atmosphere of just peace, music and socializing,” he said. “It was big on socializing last year. I’ve been to other festivals, and it’s cool. They have great musicians, and they get on and off the stage, and then they leave. At Twister Fest, everyone’s camping together, eating together or hanging out in spontaneous jamming sessions.”

Ellis also helped organize this year’s festival. He booked many of the bands, including Oklahoma acts Skytown, Cut-Throat Queens and Chief Peace. With five festival stages, Ellis said there is always something to see.

“At any given minute, there’s at least two bands playing,” he said.

Every other hour, three bands perform.

Eventually, word spread about the locale and it became a popular party spot. In 1990, he turned his ranch into a business, collecting vintage cars and booking big-name acts from the past like The Byrds, The Turtles, The Grass Roots, Firefall and Steve Forbert.

Hart’s shows had such a reputation for getting rained out that locals would beg him to make bookings.

“I broke two droughts,” he said. “The farmers started making some jokes, saying, ‘Oh, we’re going to start paying Curtis to have a concert. We’ll get some rain.’ I wasn’t laughing though, you know? When I did The Grass Roots in ’92, it cost me $20,000 for 60 minutes.”

The most distinctive feature of Muscle Car Ranch likely is Hart’s vast collection of vintage restaurant, hotel and automotive signs from Oklahoma.

“They basically had no value in the ’80s, when I was getting into them. Now, they’re kind of a big thing,” he said. “Fortunately, I saw that these would be gone soon, and I gathered up quite a few of them.”

Ellis said he fell in love with Twister Fest last year. He volunteered to help bands and set up stages during Snake Oil’s first run at the event. This year, he insisted Hart put him on the festival staff.

“He’s like me. He’s a worker, man,” Hart said. “You just point him in a direction, and he gets stuff done.”

One of Twister Fest’s goals is to showcase the state’s wide variety of talent. Organizers work tirelessly to promote the festival and its music lineup. Hart said he printed thousands of flyers this year. Since 1990, he has printed more than 900,000.

“Nobody else goes through this trouble,” he said. “What I’ve gained from it is I’m getting calls constantly from other artists and bands who want to be here. I think we’re building a fire. I really do.”

For more information or to buy tickets, visit twisterfest.com.