The Oklahoma City resident was hospitalized following her four-month battle with multiple myeloma, a rare bone cancer. The grandmother of five was undergoing chemotherapy and radiation treatment. In May 2014, her family was told it was time to prepare for the end.

But Freese wanted more time with her family, and every conventional treatment had failed her. She was encouraged by friends who had struggled with chronic diseases and experienced relief with cannabis to research studies concerning the use of marijuana for cancer treatment.

“I stopped all chemo,” Freese said. “I stopped all radiation. I basically detoxed off all pharmaceuticals. I started eating raw cannabis three times a day in salads. I am illegally healed because I am in Oklahoma.”

In March, Freese was told she was cancer-free. She calls herself a cancer survivor, thanks to cannabis. It’s a message she shares daily through social media and even at the grocery store. Medical marijuana might not be a miracle cure, she said. However, research and studies show medical marijuana helps patients suffering from a multitude of illnesses.

Doctors aren’t legally allowed to prescribe marijuana in Oklahoma. But more than 23 states have legalized medical marijuana, and four states, along with the District of Columbia, have legalized marijuana for recreational use, according to the Office of National Drug Control Policy.

Freese is a member of Green the Vote, a statewide grassroots organization. The group recently submitted a ballot initiative to the secretary of state. On Aug. 21, board members, surrounded by supporters, handed over their petition in hopes that Oklahoma voters will have the chance to decide the fate of medical marijuana. 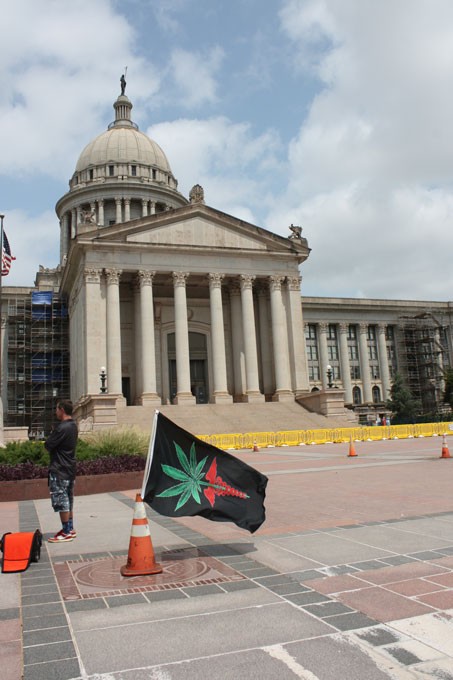 Freese’s voice joins a chorus of Oklahomans calling for the legalization of medical marijuana.

Kevin Beeler, a resident of Weatherford and a member of the grassroots organization, believes the measure needs to be pushed in the state.

“We have people dying every day,” Beeler said. “There was a 59-year-old woman from my hometown who died from cancer recently … What could have happened if marijuana was legal for medical use?”

Currently, Green the Vote is waiting for the state government’s approval of the petition. After a petition is filed and published, a petition hearing and determination follows. If the petition is formatted as required by law, the 90-day circulation period can begin. During the 90 days, registered voters can sign it.

Others will canvas the largest cities and the smallest towns.

Beeler pointed to a tan baseball cap with the words “Legalize It” embroidered on it.

“It engages me in positive conversations every day,” he said. “People want to sign.”

Isaac Caviness, president of Green the Vote, said the movement needs 123,724 signatures for a state question to appear on the Nov. 8, 2016, ballot, the same ballot for the presidential election.

The Haskell resident is confident this will be the case. He cites the results of the Oklahomans for Health signature drive for an identical state constitutional question that collected more than 75,000 valid signatures during the summer months of 2014.

As Green the Vote volunteers await their chance to collect signatures, Oklahomans for Health is raising funds for the campaign. Spokesperson Frank Grove notes that volunteers are selling T-shirts, planning a block party event in Tulsa and soliciting support for the estimated $80,000 needed to run a successful petition drive.

In the event that Green the Vote’s ballot initiative fails, Oklahomans for Health will submit another petition in the spring of 2016.

“These things are movements, and it is a process,” Grove said. “[The 2014 signature drive] was our first real battle. We are not going away. It is just the beginning.”

A year ago, Gov. Mary Fallin called for lawmakers to consider medicinal cannabidiol oil — known as CBD and a component in marijuana plants — but on a limited, medically supervised, trial-only basis. In a press release from Aug. 13, 2014, Fallin favored “allowing potentially life-saving medicine to find its way to children in need.”

That statement was released two days before the Oklahomans for Health deadline to submit signatures to the secretary of state’s office.

On April 30, House Bill 2154 — known as Katie and Cayman’s Law — became law calling for a pilot program to study CBD to treat children who suffer from epileptic seizures. The bill was named after two children with epilepsy, a relative and a family friend of the two lawmakers who sponsored the bill.

While Fallin is supportive of the legislation and future clinical trials, she remains opposed to legalizing medical marijuana.

“The CBD oil we are studying is a nonintoxicating derivative of marijuana,” said Fallin in a media statement concerning the law. “It is not marijuana, and it is not anything that can make you ‘high.’ This law has been narrowly crafted to support highly supervised medical trials for children with debilitating seizures. It is not a first step towards legalizing marijuana, and I will never support the legalization of marijuana in Oklahoma.”

Cannabis remains illegal through federal law, which classifies it as a Schedule I drug, along with heroin and LSD. When Oklahoma lawmakers approved the measure, they joined a list of states that allow medical marijuana for certain medical conditions. States enact specific medical marijuana laws that vary for treating patients who suffer from cancer, Alzheimer’s disease, glaucoma, HIV or AIDS, Crohn’s disease and more.

If Oklahomans approved a measure to legalize marijuana, the state wouldn’t face opposition from federal drug agents. Under a federal spending bill passed last December, the Department of Justice is prohibited from raiding state-licensed operations where medical marijuana is legal. In other words, no funding can go after state-legal medical marijuana.

“Laboratory and animal studies have shown that cannabinoids may be able to kill cancer cells while protecting normal cells,” the institute contended in the document, which was updated July 16.

European scientists reported findings of cannabis reducing the growth of cancer tumors in July 2014. Through their findings, published in The Journal of Biological Chemistry, the cannabis compound THC was distributed to the tumors and influenced the cancer pathology.

“Our research uses an isolated chemical compound, and using the correct concentration is vital,” said Dr. Peter McCormick, a lecturer at the University of East Anglia, in a media statement. “Cancer patients should not use cannabis to self-medicate, but I hope that our research will lead to a safe synthetic equivalent being available in the future.”

Grove said new research continues to support what members of Oklahomans for Health preach: medical marijuana can make a positive impact on a patient’s outcome.

During the Oklahomans for Health petition, Freese collected about 800 signatures.

“People want to learn,” she said. “If it is not someone who is sick themselves; it is someone that has a family member or a friend that is sick. People want to talk about it.”

Grove said a majority of the members of Oklahomans for Health have a personal connection to medical marijuana. Many want to be part of the organization for its role in helping children with epilepsy, for example.

“That is more than enough to move them,” Grove said. “Just to see the change it can make in an instant during an epileptic seizure, taking the oil and it immediately subsides. After you’ve seen that, there is very little you can do to say no.”

“It’s all about the patients for us,” said Caviness. “That’s what drives us every day. We are all unpaid volunteers out here, doing what we feel is right.”

Scientific findings fuel the movement represented by Green the Vote and Oklahomans for Health. But in the end, it’s the personal stories of renewed bodies and lives, of children with brighter futures and painless days, that grows hope for so many.