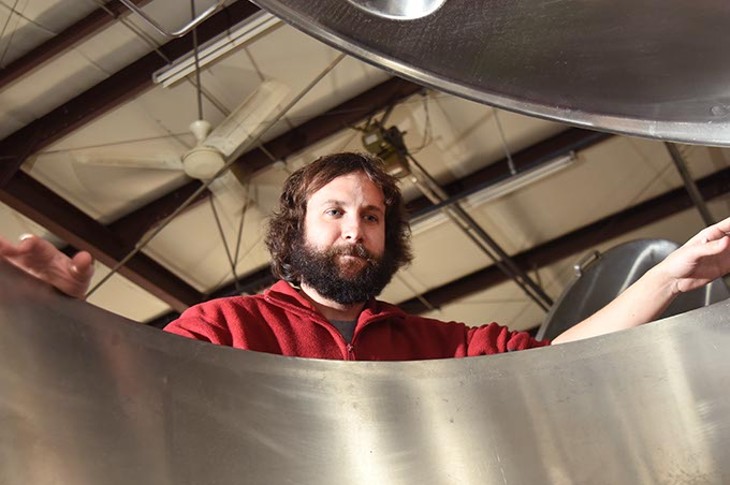 The story of this small, local brewery and its founders, Jonathan Stapleton and Trae Carson, begins, as you might guess, in the 405, in Norman, Oklahoma.

There isn’t much to indicate the existence of life there save three stickers — Norman Chamber of Commerce, Foursquare and Brewers Association — on a front window.

Walk inside 405 Brewing Co., however, and there are three rooms attached to a high-ceilinged warehouse. In the right corner lounge sits a Nintendo 64 home gaming console with Stapleton’s favorites, GoldenEye 007 and Mario Tennis. Also nearby is a Ping-Pong table and art by Carson’s former college roommate.

In the back, near large boiling pots and fermenters, sits the product of years of garage brewing and porch experiments: stacked kegs of the duo’s first commercial batch of FDR Imperial Coffee Stout.

“We’ve been home brewing for six years, testing if things will be good on a big scale,” Stapleton said. “We’ve always had a purpose of [making] this work, but we’re kind of making it up as we go.”

Carson and Stapleton’s friendship goes back a long way. Stapleton’s parents introduced Carson’s parents to each other. The boys grew up together in Norman, became friends and adults, moved away and came back.

Before Carson married in 2007, he, Stapleton and two other friends hopped in a ’95 Chevy Suburban and hit the road for a nine-day bachelor tour of Midwestern breweries. The group hit St. Louis, Chicago and Milwaukee.

“It was before the craft beer scene exploded,” Carson said. “Four of us travel from Oklahoma north, cause a lot of trouble and drink a lot of beer. I loved beer, but I had no idea I wanted to venture into making it.”

It took a few years to understand what they wanted to do with beer other than drink it, Stapleton said. They had a curiosity about how it was brewed and ideas about how they could make money by creating a product they were passionate about.

Carson said their first commercial batch of FDR Imperial Coffee Stout was just the fourth batch made at their Norman brewery. It had the aroma of a French press cup of coffee with added hints of tart blueberry and sweet chocolate.

“We’ve made it on small scale several times, and this is close [to what we were going for],” Stapleton said of the FDR. “But we’ll get better at it.”

The coffee the pair uses is a custom blend from Mariposa Coffee Roastery, a Norman- based roastery founded in 2009. When 405 was looking to lease the location at 1716 Topeka St. in Norman, Mariposa also was looking at the same space. The landlord introduced the two companies, and they soon began working together.

“Immediately, it was a great friendship,” Carson said. “We’ve done our trial batches using their coffee and loved what we were getting out of it, especially the aroma.”

Carson and Stapleton said they’re already experimenting on their next brews. Future offerings will likely include a seasonal pale ale with late-addition hops and a selection of tart and sour beers, including its Grapefruit Sour, set for release in July.

The men are quick to thank Oklahoma’s craft brewing community for helping them create their brewery.

“We’ve found them open to answering our questions and lending advice. Even though we’re 405, we love our neighbors in the 918 and 580,” Carson said. “We’re about creating memories when you have a beer ... If you can have a great commitment to friends, a great commitment to beer [is going to be] memorable.”