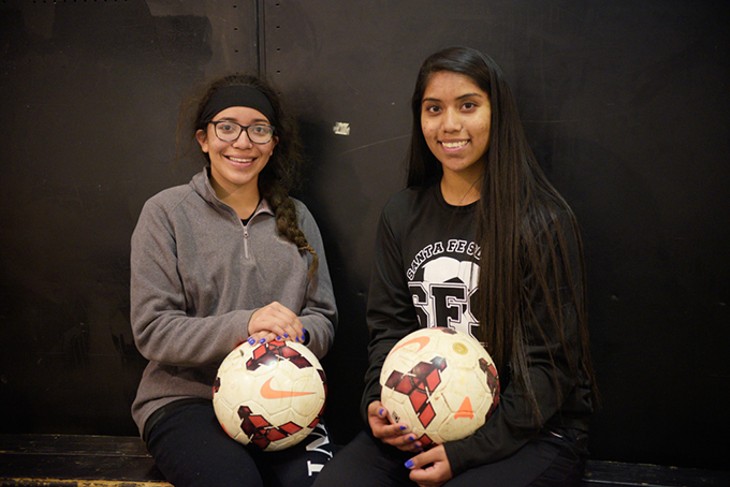 When national letter-of-intent signing days come around, usually Santa Fe South High School has no reason to celebrate, as no student-athletes from the charter school are inking letters of intent to play college sports.

While the south Oklahoma City school has had student-athletes graduate and move on to the collegiate level, the numbers are small. Few, if any, female students have had the chance to sit at a table with family, friends and coaches as they sign letters of intent with their choice of school.

On Feb. 7, the 2018 National Letter of Intent Signing Day, Santa Fe South soccer players María García and Alejandra Andrade joined student-athletes from across the nation to sign on the dotted line. The two soccer players, who began playing together in sixth grade at Santa Fe South Middle School, both signed to nearby Division II Southern Nazarene University (SNU) in Bethany.

“It was something that was very anticipated at our school,” Andrade told Oklahoma Gazette in an interview with teammate Garcia following a win over Crocked Oak on March 6. “They’ve been waiting for the longest time. I think they’ve been waiting longer than we have.”

The two are likely the first Santa Fe South girls’ soccer players to earn athletic scholarships. It’s quite an accomplishment for the teenagers who come from a program that has been on the upswing, although not traditionally thought of for girls’ soccer. Santa Fe South has made its name in academics as a successful charter school district serving a majority Hispanic student population.

A local club team’s coach recommended the girls pursue SNU’s soccer program, which could include landing a college scholarship. In addition to their high school team, García and Andrade play on Norman Youth Soccer Association’s Oklahoma Celtic, a club team.

Last fall, both players made a visit to SNU, where they were invited to practice with the team.

“I was nervous at first,” Andrade said. “I was coming off a long week at club [soccer], but they were really friendly. I could tell everyone cared about each other, which is one of the main factors in choosing a team. The [players] were all close with their coach, which was another factor for choosing the team. The coach cared about them.”

What sealed the deal was witnessing the coach take an interest in her players’ academics. García, who wants to pursue either pre-medicine or athletic training, and Andrade, who plans to study nursing, see college as an opportunity to pursue their academic goals as well as play soccer.

At a very young age, Andrade began to play soccer following the lead of an older brother. For García, it was a similar story. She comes from a family in which all members played in their youth. At a young age, she found herself on the field, playing in the Oklahoma City Police Athletic League.

The two players began playing for Santa Fe South as sixth-graders. Four years ago, the two were on the high school’s girls’ soccer team, which was only a variety squad, as there was not enough interest to support a junior varsity team.

“Our freshman year, we didn’t get a crowd,” Andrade said.

She explained that now crowds even gather at cold games early in the spring season.

“It didn’t seem worth their time,” García added.

As freshmen, the two contributed to a Saints team that made it to the second round of the state playoffs before losing. The next year, the team made it to quarter-finals. Last year, in the team’s first state championship appearance, they lost to Clinton High School in the Class 4A title game.

Losing was tough, but it marked an enormous accomplishment for the Santa Fe South program.

“Our program is kind of new because our school is kind of new,” said García, who plays as a defensive midfielder. “The program, at first, I guess you would say it was terrible. It took time. As the years went on, each team got better and progressed.”

Both García and Andrade said while the team is packed with talent and experience this season, one of its greatest strengths is the strong bonds between teammates. As the team has captured wins and clinched post-season playoff appearances, it has caught the attention of their community and younger girls interested in following their lead and their teammates.

“Girls from middle school are seeing that this program is succeeding,” Andrade said. “They want to come here. We’ve had players come from other schools to play on our team. That’s going to bring up this program. That’s what’s making a difference.”

As a public charter school, students apply to attend Santa Fe South. When no more seats are available, the school uses a lottery system to select students.

Both players are excited to continue to pursue their flourishing talents at the collegiate level; however, there is still a lot of high school soccer for them to play. This season’s team slogan is “Go hard or go home.” It motivates Andrade, García and the other players, as their school moved from Class 4A to Class 5A. The team’s goal is to make the playoffs once again.

“When we moved up to 5A this year, it messed with our heads a little bit,” García said. “We anticipated a faster pace game and more skilled girls. I think we can keep up with them as long as we can continue to do what we need to do.”