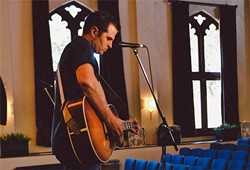 Oklahoma City singer-songwriter Tyler Hopkins had a problem, and church was the solution — but not for the reasons you might expect.

When not backing a sizable list of Oklahoma musicians (Sherree Chamberlain, Black Canyon, The Nghiems, Ali Harter, Riley Jantzen and more over the years), Hopkins is out at dive bars and rock clubs performing his own solo material, combating clanking beer bottles, hearty conversations, deep laughs and whatever game is on the television for both the crowd’s notice and the room’s available audible airspace.

It’s hard enough to bare your soul; it’s even harder when it feels like no one is really even listening to you do so.

“I’ve been talking with other songwriters for years about the frustration with the ability to play somewhere and for people to actually hear what you’ve been working on without distractions,” Hopkins said, noting the exception of The Blue Door and house shows but little else. “I got tired of playing as an acoustic act with people talking above me. I can’t fault a bar crowd for doing it, because that’s the atmosphere that you’re in. I’m just as guilty as anybody.”

In that way, the inaugural installment of the quarterly Midtown Songwriter Series — planned for Friday at City Presbyterian Church — is as much a public service as passion project by Hopkins and a group of friends supporting the endeavor. It’s a chance for songwriters to become more than muddled background noise, an opportunity to deliver a message loud and clear to those who truly wish to hear it.

“[The goal of the series] is to give songwriters an outlet in an environment that is conducive to fully appreciating the nuances of songwriting,” Hopkins said. “It’s ideal for a songwriter and an acoustic guitar.”

Though located in a gorgeous sanctuary — built back in 1920 — the Midtown Songwriter Series is not a church-sponsored event (or even really affiliated with it), nor is it much of a religious experience. Modeling itself after Central Presbyterian Church in Austin, Texas (which has hosted the likes of Fiona Apple, Grizzly Bear and St. Vincent over the years), the church is acting more as community space. Though Hopkins won’t lie — the nature of the room has its perks.

Even beyond the beautiful, intimate setting and exceptional acoustics, Hopkins hopes that the respect a congregation shows for its preacher’s sermon will translate to a similar experience between the performer and audience.

“The benefit, I think, in having the show in a setting like that is being in that sort contemplative room,” he said. “Whether they are religious or not, there’s a sense of reverence for the artists performing, or at least that’s my hope.”

There was never much of a question when it came to the inaugural lineup. Hopkins picked not only some of his closest friends but also some of the Oklahoma artists he admires most: Beau Jennings and Chase Kerby.

“There’s a natural chemistry between us all,” Hopkins said, noting the likelihood of the trio playing a few songs together at the end of the show.

“Our musical styles are similar enough to fit together well on a bill but different enough to make it interesting.”

Jennings, of course, is best known for fronting Americana band Cheyenne, striking out solo as the group dissolved and finding a backing band in The Tigers. Kerby (who happens to play piano for The Tigers) got his start with pop-rockers The City Lives before moving on with Defining Times and solo work. His first EP, Tidal Friction, is due this fall.

“I’ve played with dozens of musicians, and he’s one of the best I know,” Hopkins said of Kerby, going on to praise Jennings’ literary approach balanced with an everyman sensibility. “[Jennings] is the master of doing that, making something high-minded and accessible at the same time.”

The diverse backgrounds of these musicians speak to what Hopkins hopes the series will continue to showcase, pining to get songwriters better known for full-band work to step out into the solo realm.

“There are a lot of songwriters who aren’t known for their songwriting that should be,” Hopkins said. “They play with a band full of great musicians and they focus on that, not necessarily the structure of the songs, the lyrics, the vocal melody. Those are enormous things that take a lot of time to work on and craft. I’d love to give an outlet to people like that.”

If the realization of the Midtown Songwriter Series wasn’t momentous enough for Hopkins, the showcase comes just months after he graduated law school and weeks after he passed the bar exam — a reintroduction back into the scene after months of nonstop cramming.

“I have nights and weekends, and that hasn’t been the case for three years,” Hopkins said.

After releasing his debut solo record, Somebody Like You, with his band The Rebellion, Hopkins is already working on the follow-up, noting that — fittingly enough — there are some big changes and a significant growth in the sound and structure. Friday’s show provides a first glimpse into the shift with nothing to distract your ear and eye away from studying it as closely as you desire. Mission accomplished.

“The songs are a lot more nuanced. It’s not just hard, driving bar rock anymore. And that’s what you’ll start to hear: some old school R&B influences in the rhythm section,” he said. “The last record was mainly drinking songs. There will still be plenty of that, but there’s more to it, too.”