UCO’s College of Fine Arts and Design hosts Broadway icons and sings and dances like never before in its 2017-2018 season. 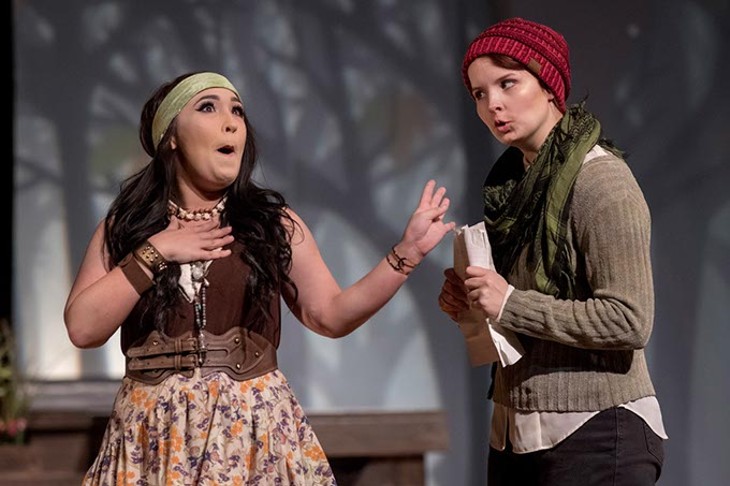 All the world might very well be a stage, but theaters are still the locus of movement and voice, the site where artists, dancers and actors combine their efforts to create performance. This diversity and reverence for the stage — both as a physical space and an idea — marks the upcoming performance season of the College of Fine Arts and Design (CFAD) at the University of Central Oklahoma (UCO).

The 2017-2018 season consists of many different elements, including the Broadway Tonight series, various musicals and operas, dance performances and music showcases, according to Greg White, professor of musical theater and CFAD assistant dean.

Frequent attendees of CFAD events can purchase a Central Arts card for $10, which includes certain discounts. The profits benefit scholarships at UCO.

As part of its upcoming season, CFAD hosts a series of performances and master classes with leading and renowned figures called Broadway Tonight. White said it offers UCO students and the community a new look at the stage.

“It’s a very unique program we’ve got on campus,” White said. “We bring in major names in the industry to perform on campus.”

Diavolo Dance Theatre performs Jan. 30 at Mitchell Hall as part of the Broadway Tonight series. Featured on America’s Got Talent, the group has previously worked with UCO students.

Diavolo will perform AWOL, a piece that utilizes metal platforms moved along the stage to make different structures, which dancers use to move around, said Michelle Moeller, chair of the Department of Dance.

“I’m really proud of the series,” White said. “I feel like it’s really boutique programming in its own regard.”

The School of Music and Musical Theatre chose the first show of the season, Chicago, not only for its persistent popularity, but also as a counterpart to its venue, recently renovated Mitchell Hall Theatre, built in 1926.

“We wanted to do something that complemented the architecture of Mitchell Hall,” White said.

Chicago, set in the 1920s vaudeville world of the titular city, follows Velma Kelly and Roxie Hart, two spurned women who have blood on their hands and performance in their veins. As the women fight legal battles (their own kind of show), they also pursue fame, recognition and female solidarity. The musical runs Oct. 5-8.

For its spring musical, CFAD presents Man of La Mancha, loosely descended from Miguel de Cervantes’ gentle satire of knighthood, Don Quixote. The play depicts the imprisoned Cervantes in a series of dizzying transformations, first as Alonso Quijano and then as the titular man of La Mancha in various 16th-century misadventures. Man of La Mancha runs Feb. 15-18 at Mitchell Hall.

Theatergoers can also look forward to other shows at Mitchell Hall put on by CFAD’s Theatre Arts program, including Sarah Ruhl’s Eurydice Nov. 2-5. Pulling from Greek mythos, the play focuses on its titular figure and the object of her love, Orpheus. The Mousetrap, based on the Agatha Christie novel, runs March 29-30. Like so many of Christie’s stories, The Mousetrap offers audiences a look at the inner workings of Monkwell Manor, a hotel.

The season closes with 6 Women with Brain Death, or Expiring Minds Want to Know written by an Oklahoma composer. The show runs April 12-14 at UCO Jazz Lab, 100 E. Fifth Street.

“It’s something that when I was in college was a cult favorite around here,” White said of the “irreverent rock revue.”

Out-of-this-world children’s opera Starbird runs Nov. 15-17 at UCO Jazz Lab. Other performances at the Jazz Lab include the annual Macabret, a pop-rock Halloween-themed revue at the Jazz Lab Oct. 27-29, and a holiday revue Dec. 12-16.

Additionally, the School of Music will produce Martha, an opera drawing from multiple sources that originally premiered in Vienna in 1847. Following the courtly antics of Lady Harriet Durham and her rural relatives, Plunkett, Lyonel and Sir Tristan Mickleford, the opera runs April 20-22 at Mitchell Hall.

Dancers will also collaborate on Chicago, and Kaleidoscope will offer a full-length spring concert featuring the work of faculty and guest stars March 2-4.

“We train our dancers in ballet, modern, jazz and hip-hop,” Moeller said. “Our concerts usually showcase elements of those dance genres.”

“I think we’re very progressive as far as our programming is concerned,” White said.

print headline: Diverse stagings, UCO’s College of Fine Arts and Design hosts Broadway icons and sings and dances like never before in its 2017-2018 season.