UCO offers a summertime cool-down with a free movie 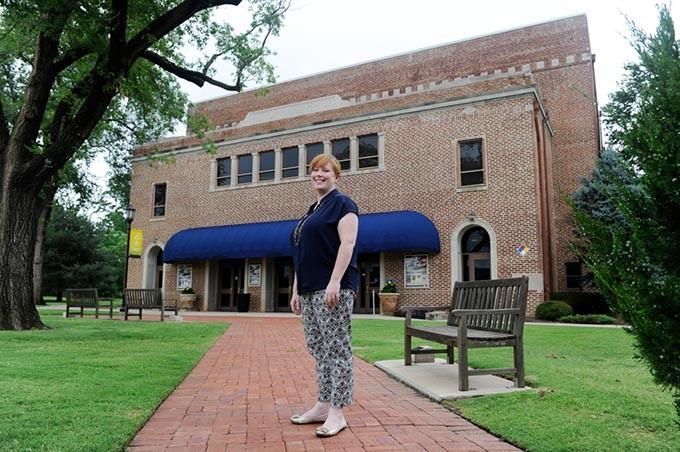 Unlike today, when folks hang their bare feet over the seat in front of them and cell phones light up the darkened theater, movies used to be a dress-up occasion. Back in the early part of the 20th century, going to the movies was an event. Men and women dressed in their best attire for an evening of fine entertainment.

Now, the University of Central Oklahoma (UCO) harkens back to those days for the second annual summer series, Movies@Mitchell.

“Seeing a movie at Mitchell Hall [Theatre] is not only a free source of air-conditioned entertainment for families in our community throughout July,” said Meghan Braseull, director of facilities and productions for Mitchell Hall, “it is also a great way to experience how movies were originally enjoyed in the mid-20th century — in a lovely theater.”

This throwback to an earlier time doesn’t necessarily mean audiences have to dress up, and flip-flops are certainly appropriate for the 21st-century crowd, but seeing a film in a theater like Mitchell Hall can be a fun alternative to large, multiplex cinemas.

“Prior to the invention of television, going to the movies was quite the event and films were often showed in theaters that doubled as live performance venues,” Braseull said. “Seeing a movie at Mitchell Hall recreates the atmosphere and big-event style one would have enjoyed when going to the movies in the 1940s and 1950s.”

Last year, during its inaugural run, audiences were treated to films mainly from the 1980s. For the 2015 season, the theme will be musicals. The final movie will be Oklahoma! on Saturday. Other classic musicals like Little Shop of Horrors, West Side Story and Singing in the Rain were shown early this month at Movies@Mitchell.

Each movie was selected for a special reason, Braseull said. The showing of Oklahoma! coincides with the university’s yearlong UCO@125 celebration, honoring the state the university has served for 125 years.

“Additionally, West Side Story [served] as a primer in anticipation of the UCO Jazz Division and dance department’s premiere adaptation of the Leonard Bernstein production that opens this fall,” Braseull said.

The other featured musicals were chosen based on a Facebook survey.

“The original idea for this series came about a couple of years ago,” Braseull said. “We simply wanted to do something for the community and the families, and we thought this is something everyone would enjoy.”

Popcorn and concessions will be available, and admission to the movie is free. Audience members will have an opportunity to donate via text to the Build Mitchell Hall campaign, which will nearly double the size of the historic theater.

“Mitchell Hall has serviced the community for more than 80 years, and we are happy to continue doing so, even during the summer months,” Braseull said. “This new campaign will enlarge the facility and is designed by Elliott + Associates Architects.”

The renovation will include two new rehearsal spaces, a comprehensive costume shop and makeup lab, an enhanced green room, a storm shelter that doubles as a blocking studio, an open gallery space, study lounges and faculty offices.

Mitchell Hall is located in Edmond on University Drive, between Main and First streets on the UCO campus. For a complete list of all UCO College of Fine Arts and Design events, including those at Mitchell Hall, visit uco.edu/cfad.