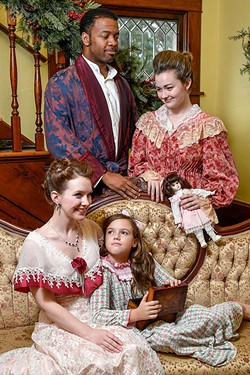 University of Central Oklahoma’s (UCO) Broadway Tonight series brings Broadway-style shows to students and the community for the holidays with its production of classic musical Meet Me in St. Louis.

The musical was adapted from MGM studio’s 1944 film of the same name. Originally starring Judy Garland and Margaret O’Brien, Meet Me in St. Louis follows the Smith family leading up to the 1904 World’s Fair international exposition in St. Louis, Missouri.

Divided into seasonal vignettes beginning in the summer of 1903, the film and subsequent musical follows Alonzo and Anna Smith, daughters Rose, Esther, Agnes and Tootie and son Lon Jr.

Esther and Rose are caught up in the perils of young romance as they await the launch of the World’s Fair. An announcement from their father upends their plans.

Irving Brecher and Fred F. Finklehoffe adapted the critically acclaimed film from a series of Sally Benson short stories first published in The New Yorker. The film also was adapted into made-for-television films in 1959 and 1966 and a Broadway musical with additional songs in 1989.

Despite its Hollywood beginnings, Meet Me in St. Louis has a few local ties.

Ralph Blane and Hugh Martin wrote the popular movie track “Have Yourself a Merry Little Christmas.” Blane, from Broken Arrow, now has a UCO School of Music scholarship named after him.

“The music is the real star of the show,” White said.

In the film, the tune, performed by Garland, cheers up Tootie in the face of what seems to be an impending family change. While the lyrics known today are upbeat, Blaine’s draft included lyrics that Garland, along with director Vincente Minnelli, criticized as too depressing. After some hesitation, Martin and Blane eventually rewrote the lyrics into what they are today.

Meet Me in St. Louis offers more for audiences than music.

The cast is comprised of UCO musical theater students and local children. During their months prepping, they received guidance from White and director Billie Thrash, a UCO adjunct professor.

“We’re really going all out to make this really special for our community,” White said. “We have a classic holiday musical on stage, Mitchell Hall [Theatre] will be decorated inside and out, we’ll have a hot chocolate truck out front for our audiences to enjoy — it’s going to be an event.”

The Broadway Tonight series runs from August to May each year and features UCO students as well as four to five well-known performers.

Meet Me in St. Louis