Ultimate Frisbee is alive in OKC 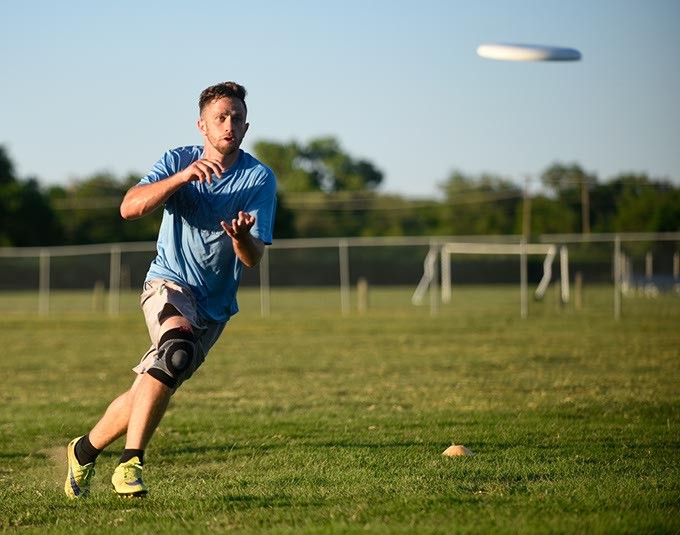 “Ultimate Frisbee, or simply Ultimate, as we call it, is a non-contact field sport,” said Craig Batchelder, an OKC Ultimate Frisbee league player and board member.

“The core tenet is the spirit of the game; this is one of the things that makes Ultimate unique to any other sport,” he said. “There’s a common understanding and agreement between all players that they will try and treat each other fairly and safely. It is one of the reasons you can go anywhere in the world and play the game.”

Points are scored by passing the disc between team members, advancing it down the field until one team reaches the opposing end zone, resulting in a score.

“Other basics are that players must not continue moving after they catch the disc,” he said. “You advance the disc in a stepping stone-like fashion. Interceptions, incomplete passes and passes out-of-bounds all result in turnovers. Ultimate is also a self-refereed sport, and players on the field make foul calls and resolve any issues that might arise.”

Since its inception, the sport has continued to grow, and new members are always welcome.

“On a local level, we have focused on giving people more opportunities to play and enjoy the sport,” Batchelder said. “Several years ago, summer league was our main focus, but now we have weekly workouts and workshops, and we host local tournaments that draw people from the surrounding states. We also have local pastors who volunteer their gyms, so now everyone can play, rain or shine. It has really been fantastic to see the community grow and thrive.”

All ages are welcome, Batchelder said.

Pickup games are 6 p.m. each Tuesday at Oklahoma City’s Douglass Park, 501 N. Bryant Ave. A skills and drills class is 6 p.m. each Thursday at the park and focuses on teaching the fundamentals of the sport.

While Ultimate requires a fair amount of running, Batchelder said the bar of entry is rather low.

“I don’t naturally go out and run, but I’ll run down a Frisbee that a teammate throws to me every time,” he said. “Ultimate Frisbee players are some of the most welcoming and genuinely nice people you will ever meet. So it’s much less intimidating for newcomers compared to other sports. I have played in New Zealand, Colorado, Arkansas and California — really all over. … It’s refreshing to have that type of community all over the world and to be able to share that with others and foster it here in Oklahoma.”

For more information or to join, visit okcultimate.org.