The power of word of mouth was seen in full effect after the opening of Tsubaki Szechuan last November.

The restaurant, located between Military and Western avenues at 1117 NW 25th St. and connected to Super Cao Nguyen, quickly gained an audience of people flocking to the off-the-beaten-path restaurant for its authentic food from the Szechuan region of China.

“The pace has been a lot better than I would’ve expected, especially at the beginning. It started really quickly, and I didn’t think the word would travel that fast,” said manager Bao Nguyen.

Related I’ve never quite understood why sushi and steak are always getting shoved together. 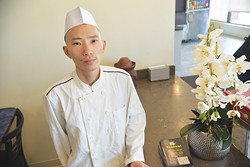 The Lius are native to the Szechuan region, where they grew up and lived for some time before moving to New York City last decade, where they met Yang. The Lius stayed in New York after Yang moved to Oklahoma City, where they operated a Szechuan restaurant in a part of the city that was insulated from tourists and frequented by international students at a nearby university, Nguyen said.

The restaurant had a falling out after problems with an original business partner led to too many investors, and the Lius felt it was being pulled in too many different directions.

They secured the location that is owned by Super Cao Nguyen, which serves as the restaurant’s main food and produce vendor. Super Cao co-owner Ba Luong said that he loves the restaurant because it is “unapologetically authentic.”

“It’s so easy,” Nguyen said of the relationship with Super Cao Nguyen. “If we run out of something, we just run over real quick. Most of the things we need, we just get it there because it’s so fresh. We don’t have to wait for a truck.”

"People are like, ‘How the heck do you get soup in a dumpling without it spilling out?’" —Bao Nguyen tweet this

One of the dishes that led to so much word-of-mouth buzz is the soup dumpling.

“I don’t think another restaurant in the city does soup dumplings,” Nguyen said. “That word caught very quickly. People are like, ‘How the heck do you get soup in a dumpling without it spilling out?’”

Cooking the broth in advance and allowing it to cool so that the fats rise and turns it into a gelatinous mixture creates the soup effect in the finished product. When the dumpling steams, the broth returns to complete liquid form.

The key to Szechuan cooking is the reliance on a variety of peppers, chief of which is the eponymous Szechuan peppercorn. Instead of being spicy like a traditional black peppercorn in United States cuisine, the Szechuan variety is heavy on floral overtones and creates a tingly and numb feeling on the tongue caused by the chemical hydroxy alpha sanshool.

“The numbing sensation that is supposed to open up your taste buds so that the actual spice level can hit in a flavorful spot,” Nguyen said. “Some people take a while to get used to it, and some people feel like they’re at the dentist.”

The numbing and tingling effect can be felt after a few bites when the guest takes a sip of water. One of the restaurant’s most popular entrees is the dry spicy tasty beef with ginger and peanuts ($15.95) and showcases the tingling sensation in full effect.

“It’s definitely one of my favorites also just because, with a nice cold beer, it is always pretty great,” Nguyen said. 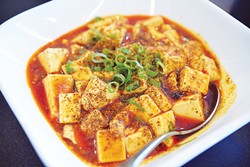 The authentic Szechuan fish filet is a soup filled with swai, greens, bean sprouts and tons of chopped chilies in a red glow of a broth ($18.95) that is to be poured over rice. The mapo tofu earns regards from Nguyen for its heartiness.

“It makes you feel like you’re not eating tofu because it gives you a hearty flavor,” he said.  “It’s like ‘Wow! I’m eating tofu,’ something that is flavorless by itself.”

For all of the dishes on its menu that have garnered fans, Nguyen said that Tsubaki Szechuan offers off-the-menu items and Peter Liu is always able to make a dish happen if it is requested and the ingredients are available.

One of the most popular off-the-menu items is the taro chicken. Taro is a purple sweet potato that is slightly more saccharine than its U.S. counterpart. The chicken is stewed in a chili broth with chunks of taro.

“The broth retains the taro flavor, but it works well,” Nguyen said. “It’s a sweet and savory taste with a decent amount of salty. It’s a weirdly good taste. It’s wild to explain.”