Audio Book Club and Special Thumbs get jacked on riffs and laughs for a 51st Street Speakeasy show. 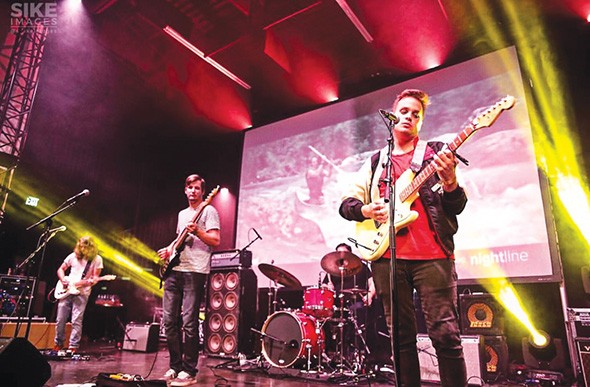 Audio Book Club’s debut EP, What If We Got Buff?, is meant to make you laugh.

“One day, I was talking with my wife, and it just turned into a conversation about what if, after all these years of not really caring or anything like that, we all just got, like, incredibly jacked and started playing shows as bodybuilders,” said the Oklahoma City band’s frontman, Zach Pearson, “and it eventually just turned into a big inside joke.”

Created by Pearson’s wife Elizabeth Newby, the album art for What If We Got Buff? features a retro-cartoon workout scene on an old TV, immediately indicative of both the album’s lighthearted sense of humor and what Pearson described as a “balls to the wall” sound inspired by ’80s new wave acts such as The Knack, Tears for Fears and Talking Heads. Audio Book Club — also featuring drummer Dylan Jordan, multi-instrumentalist Zach Zeller, bassist Derek Moore and guitarist Adam Thornbrugh — is also “a blend of all the bands [they] were in before,” Pearson said.

“It’s very incestuous, as far as that goes,” Pearson said. “We all played shows together before, so it just kind of worked out.”

All members of Audio Book Club were or are members of other local bands including Deerpeople (Moore), Larry Chin (Thornbrugh), Horse Thief (Zeller) and Wildings (Pearson and Jordan). Though Audio Book Club includes traces of all these other bands, Pearson said, the What If We Got Buff? EP also benefits from clarity of purpose.

“We kind of take a different approach as far as songwriting and stuff goes,” Pearson said. “I think if you listen to those other projects, everybody’s younger and writing whatever it was they were feeling at the time and stuff like that. With this, it’s a little bit more calculated as far as what we’re writing and putting out in that we want it to be more cohesive and not necessarily making people question what it is that they’re listening to, like, ‘Is it a rock band, or is it, like, an alternative band, or is it experimental, or what exactly is it?’ In the beginning, it was just kind of an experiment, like, ‘Let’s do something we haven’t done before, as far as just writing straight-up rock music that doesn’t necessarily have a lot of pretty things like Deerpeople have with the flute and violin and everything that’s going on — a little less ambiance and just a little bit more energy.’”

The EP release show in June featured a slideshow of the band members edited into weightlifting scenes and sports championships.

“By nature, we’re all kind of jokers,” Pearson said. “With this stuff, we definitely kind of wanted to make people forget about that heavy shit for the set and just have a show that they’re going to be into the whole time. … There’s really not a whole lot of seriousness to it whenever we come together. We’re just all cracking jokes and drinking beer and working the songs out. … We’re just trying to have a good time.”

Ironically, the band’s lighthearted attitude comes from a place of increased maturity, from “getting older and realizing in general that it’s not really that serious,” Pearson said.

“With this band, I think everybody’s just kind of seeing what we’re all growing up into,” Pearson said. “It’s really fun to see, actually. … Most of the band is married at this point, too. We all have jobs and wives and everything, so this is our fun stuff.”

Special Thumbs also shares the bill. The band released “Rise” in June followed by an accompanying animated music video. “Guppy” will be released Friday. These two singles are the first of six to be released from So Who Do You Know, Special Thumbs’ full-length debut that the band plans to release later this year.

Vocalist, lyricist and guitarist Patrick Greene said the approach for the new album, recorded at Stowaway Recordings with engineer Michael Trepagnier, differed from previous releases Pollen and Advice because the band had more studio time.

“We got to go into the studio with all these guys and just record for like a week straight,” Greene said. “We’ve never really done it quite like that. … They had so much cool gear, stuff we had never seen. They had a Wurlitzer. I played through a Penton amp that I was not even familiar with. … We had a ton of fun and got to play with a bunch of toys, basically.”

Vocalist, lyricist and keyboardist Joey Riley said the band demoed the album for about a year before taking it to Stowaway.

“We set out to have a well-produced album,” Riley said. “We were a little scared of the whole live-feel aspect, but what we ended up doing was recording drums, guitar, bass, keys, all live. Then we were able to add these extra components, and … we ended up with a really nice marriage of the live energy on top of it sounding well-produced.”

“I had written a guitar part, and we all felt like it sounded too ’90s,” Greene began to explain.

In any case, Zeller transposed the offending guitar riff to the piano.

“It was pretty incredible just to witness it,” Greene said. “It just completely changed the way the song felt and sounded and gave it new meaning, which we really love.”

Riley said the band worried a little bit about recreating the studio sound with its additional equipment and musicians live onstage, but modern technology alleviates most of those concerns.

“In the back of your mind, you’re just like, ‘How are we going to pull this off live?’” Riley said. “But I think that thought can be crippling. I don’t think you have to worry about that, especially in this day and age, man. Ableton Live is a real thing. If you want to do some backing tracks, you can do some backing tracks. There’s a lot of purists out there who are like, ‘No. Everything has to be done live,’ but there’s a lot of tricks. Everything can be done live, but it’s not necessarily that you’re using a guitar to do it. …. We’re in the digital age. We’re at the beginning of this frontier, like the beginning of space exploration, almost.”