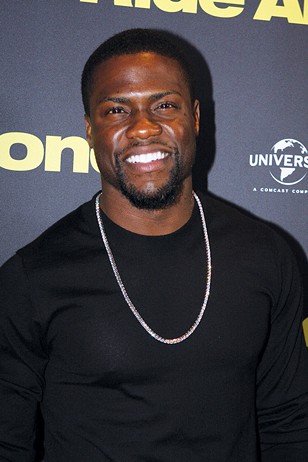 After dozens of arenas sold out months in advance, comedian Kevin Hart has opted to expand his Irresponsible Tour to Chesapeake Energy Arena on Nov. 3. Quickly proving to be one of his most prolific outings yet, Hart has resonated with audiences internationally with his keen social commentary and dissection of masculinity through down-to-earth musings.

At 39, Hart has avalanched into a comedic icon with countless appearances on film and television alongside a stand-up act that has already eclipsed most of his influences.

Like many comics, Hart was far from an immediate success, dealing with numerous disappointments and lackluster ventures before finally hitting his stride in the mid-2000s. While many of Hart’s initial performances (under the persona “Lil Kev”) were adequate, they did little to distinguish him from the burgeoning wave of up-and-coming comedians.

“I was trying to be everybody,” Hart told New York Times in 2012. “I was so confused I didn’t know what to do. It takes a while to tap into that. You don’t just wake up and go, ‘Oh, I’m going to be good and do this and talk about anything.’ I didn’t know to make that funny.”

The hardships of Hart’s childhood compelled him to find a nonviolent coping mechanism. In his autobiography co-written by Neil Strauss, I Can’t Make This Up: Life Lessons, the comedian writes on his father’s debilitating cocaine addiction and his oscillation between imprisonment and absence. Raised virtually single-handedly by his mother in Philadelphia, Hart developed an understanding of the parental struggle and the inaccuracy of many gender stereotypes. This insight, compounded by Hart’s innate ability to make his loved ones laugh, encouraged him to pursue a career in comedy.

Hart’s comedic talents were not immediately noticed. He ultimately gained his first real exposure through Judd Apatow’s cult series Undeclared, which he parlayed into appearances in feature-length comedies like Scary Movie 3 and Soul Plane. In 2010, Hart released his first comedy album, Seriously Funny, to rave reviews. However, he would memorialize himself within the greater zeitgeist in 2013 with Let Me Explain, a performance compared by many critics to the classic performances of Richard Pryor and Eddie Murphy.

Despite his continued success, Hart cites failure and personal turmoil as necessary factors for a meaningful experience. The hurdles of jealousy and the necessity for empathy drive Hart to innovative performances and endeavors far outside his comfort zone.

“It’s easy to complain about your life,” Hart wrote in his memoir. “How tough it is, how stressful it is, how everyone else has it so much better. But if you step into the life of someone you envy for just a day, you’ll discover that everyone has their own problems, and they’re usually worse than yours. Your problems are designed specifically for you, with the specific purpose of helping you grow.”

While Hart’s personal experiences lie at the core of much of his act, he has received criticism for what many have considered a noticeable lack of racial commentary. Though racial stereotypes have factored into the comic’s performance, such as playful nudges toward his own 5-foot, 4-inch stature, Hart omits many words on racism, even in the midst of rampant police brutality towards African-Americans.

“I won’t acknowledge what I won’t let beat me,” Hart said during a cover interview with Rolling Stone. “Have I experienced racism? Of course. But will I make you feel superior by saying I’ve felt trumped by it at times? No. I’ll beat you by succeeding. I want to show my generation that a man of color, despite the roadblocks, can still make it.”

Your problems are designed specifically for you, with the specific purpose of helping you grow.Kevin Hart tweet this

Making it is what Hart has displayed an apparent knack for across his career. In 2015, Hart was cited among Time’s 100 most influential people and was described by Chris Rock as a comedian of immeasurable influence. As of 2017, Forbes found Hart to be one of the most successful contemporary stand-up performers, trailing narrowly in gross ticket sales behind Amy Schumer and Dave Chappelle.  Given the unprecedented success of his current run, Hart seeks to make 2018 his most prominent year yet.

For Irresponsible Tour, an outing that added nearly 100 more venues after the worldwide success of Jumanji, Hart has opted to place one of his most vulnerable and questionable experiences front and center. In an interview with The Breakfast Club in late 2017, Hart discussed his infidelity to his wife, Eniko, during her pregnancy with his third child. Describing the instance as “beyond irresponsible,” Hart spent months of intense reconciliation for his self-proclaimed “dumbest moment.” However, with many attempting to prod Hart concerning his marriage, the comic was set on turning his latest moment of weakness into an unshakable learning experience.

Hart demonstrates that life’s experiences, especially those that are among the most uncomfortable, are powerful catalysts for growth. To be an effective and sincere comedian, it is necessary to disclose what terrorizes an entertainer the most. With this process often comes a chance of self-sabotage and humiliation, a moment that can genuinely feel like the abrupt end to a career. In his memoir, Hart insists that without such challenges and moments of utter failure, a comedian cannot be expected to achieve long-term success. Ultimately, Hart writes that perseverance is not defined by your ability to overcome, but one’s ability to rebound.

“In life, you choose to cry about the bullshit that happens to you or you can choose to laugh about it,” Hart wrote. “I choose laughter.”