“I came from a generation when we put on shows in basements and didn’t think about paying the bands, but we always did if we had the money,” he said. 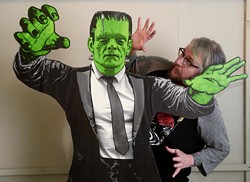 Sunday is now known as something of a Don Corleone of local fantasy, science fiction and horror fandom, but he grew up sporting more band patches than pocket protectors.

“I was always a nerd, but I always played in punk-rock bands,” Sunday said. “I was the nerd who had nasty dreads and was gutter-punked out.”

The sixth edition of Sunday’s Underground Monster Carnival is 1-9 p.m. March 4 in the Hobbies, Arts & Crafts Building at State Fair Park, 3001 General Pershing Blvd. In the era of high-dollar franchised conventions, the annual, all-inclusive cosplay gathering has amassed a cult following by remaining strictly loyal to its non-corporate formula.

The event celebrates every fandom under the fiction umbrella. Sunday welcomes Trekkies and Batmaniacs to Furries and Walking Deadheads. The fest is loud and energetic but also family-friendly, featuring music, vendors, film screenings, panels, local artists and creators, a fashion show, a carnival-themed kid zone and more.

Sunday is a veteran at putting on local events and gatherings. While everything is professionally run and tightly organized, he also has a knack for making events feel more like loose, do-it-yourself parties than competing big-box conventions could ever hope for.

Those looking to pay big money for a 12-second meeting with a certain television or film celebrity have plenty of other options, but Sunday makes Underground Monster Carnival unique by applying his grassroots punk-rock wherewithal.

“I came from a generation when we put on shows in basements and didn’t think about paying the bands, but we always did if we had the money,” he said. “It wasn’t about paying to play or having to pay Facebook to even get your show seen.”

Growing up in the Tulsa punk and hardcore community, Sunday spent countless hours trying to persuade anyone and everyone to attend his small-venue shows. Good attendance was vital for convincing the venues that his future bookings would also be viable, so Sunday passed out fliers to friends and fellow musicians and anyone he came across on the street — from pedestrians to known escorts.

That nondiscriminatory attitude lives on at Underground Monster Carnival. It welcomes all devotees of all fictional universes. Sunday prints fliers in both English and Spanish. He also keeps admission prices very low compared to larger fan conventions and refuses to sell advance tickets.

The event is for-profit, but Sunday said it’s not something he started to get rich or be able to boast about drawing people from across the country. It is run by a pro bono crew that is as or more happy to be there than any of the guests.

“I came at it with a different approach,” Sunday said. “[I don’t] make it really militant where I have 20 employees and I’m making them all wear lame shirts. All our volunteers, I tell them, ‘Hey, if you’re going to come to our show and help, you dress however you want and have fun.’”

Underground Monster Carnival began at the Tulsa fairgrounds. Sunday took the concept with him when he moved to Oklahoma City six years ago.

Part of the event’s purpose is for local aspiring writers, artists, filmmakers and crafters to have substantive, organic encounters with local and national fandom figures — encounters not just limited to a quick and expensive autograph or picture.

Special guests this year include John Ferguson (known more commonly for his recurring TV role as Count Gregore), actress Anjanette Clewis, artist David Richmond and a number of other writers and music acts. A fashion show bringing  to life the art of Velvet Monkey Salon’s Ana Iaccarino is also planned.

Sunday said he wants his event to be something fun and open to everyone, not just nerd elitists.

“I love the comics and I love the books and the movies,” he said, “but just because you like X-Men doesn’t mean you want to go off and dedicate your life to going into comic books and telling people they’re wrong because Wolverine actually wears yellow.”

Sunday frequently bemoans what he calls “Wal-Mart conventions” and said those who visit his event expecting video-game stations, A-list celebrities and convention-center gloss might leave disappointed.

Local ghouls, Underground Monster Carnival carves out a local niche in the era of expensive and impersonal fan conventions.