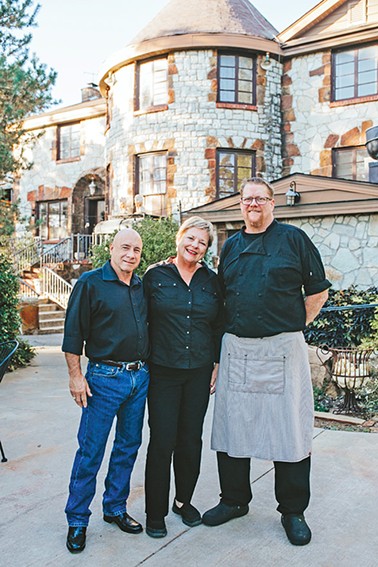 More than a restaurant and event center, Castle Falls provides a unique link to pre-Land Run Oklahoma history and is a vessel to showcase long-forgotten elements of downtown Oklahoma City.

Nestled on five acres at 820 N. MacArthur Blvd., as a few trees obscure its view from the busy thoroughfare; the driveway acts as a portal to Oklahoma history in an idyllic setting.

Guests can stand under some of the same trees that stood in the 1850s when a portion the property was a meeting place for relocated native tribes to have peaceful meetings in their new home.

Inside the main castle, one of three buildings on the property, which houses multiple dining options Thursdays-Saturdays, meals are eaten surrounded by artifacts of Oklahoma City’s self-inflicted downtown destruction.

“Everything in the castle is salvaged, and we tried to carry on that tradition because the man who built the castle salvaged things way before anyone salvaged things,” said Amy Rollins, the property’s third owner, who lives in a cottage with her husband Ralph, as she serves as front of the house at the castle’s restaurant and books on-site corporate events and weddings.

As OKC was going through its first phases of urban renewal in the 1960s, historic buildings were torn down and their artifacts were sent to the landfill without regard to their significance.

Oklahoma City native Bill Blecha dreamed of one day building a castle like the ones he saw in Normandy during World War I. When Blecha returned home, he became superintendent for Manhattan Construction Company, which oversaw the demolition sites of downtown Oklahoma City airport and Oklahoma County Courthouse.

Instead of taking all of the items to the landfill, Blecha began storing them as part of his master plan to recreate a French castle in Oklahoma, long before historic preservation was in the zeitgeist’s lexicon.

Blecha’s dream was achieved in 1972 after a five-year construction process to build the three-story replica of a castle in Normandy. Blecha lived on-site until his death in 1989. Hilda Vormann purchased the property in 1994 and transformed the castle’s cellar into the German restaurant Keller in the Kastle. The restaurant closed and she put the property up for sale in 2004. Rollins jumped at the opportunity because of the property’s unique historic connection.

Rollins grew up near 68th Street and MacArthur Boulevard, driving by Castle Falls without even knowing it was there. She attempted to purchase the property in 1994 but wasn’t going to miss another chance.

“I talked my husband into coming to  look,” she said. “He told me to forget it; we couldn’t afford it. Thinking I would never do this, he said we’d have to sell our home and live here. I said, ‘Okay; I’m in.’”

In order to make the property a viable business venture, the couple overhauled the dining experience, creating a nine-table restaurant on the bottom floor, a chef-driven five-course meal on the Primrose second level and event space for proposals and private dining on the third floor. They completed a 9,000 square-foot Grande Hall that serves as large event space for corporate events and weddings, complete with a bride’s room. The property’s chicken coop was converted to become a groom’s room.

The Grande Hall backs up to a tree grove, which is part of the southeast corner of what is known as Council Grove, a busy meeting place between displaced native American tribes and U.S. soldiers from nearby Fort Reno.

“When we bought the property, in order to get on city sewer line, we would’ve had to cut down all of these trees,” Rollins said. “I chose not to because a lot of these trees were here during the [pre-Land Run] time period. It’s a fascinating history that people overlook because of the politics of it. It’s pretty ugly that they took the land away twice [forced relocation on the Trail of Tears and the Land Run].”

Rollins said it is common for a small wedding party to have a ceremony under the trees and follow it up with a meal in the castle. In The Cellar, diners peruse the menu by chef David Sullivan while surrounded by marble from the original Colcord Hotel. The railings leading to the third level are salvaged from the old Oklahoma County Courthouse. The third floor is made from hardwood from the gym at Capitol Hill High School, and it’s surrounded by mahogany from the curved storefronts of old downtown businesses. Blecha built the castle’s attic with wood saved from Downtown Airpark, which was lost to fire. 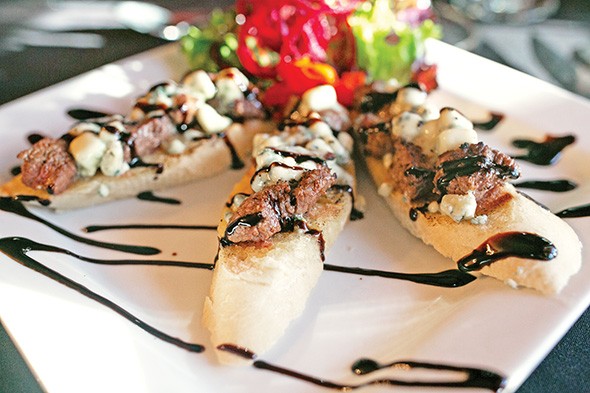 “When you open the attic, you can still smell the burn,” Rollins said.

Sullivan cooks everything in the kitchen, whether it’s from the main menu in the cellar, the prix-fixe  Primrose menu or a catering event featuring 250 guests.

Though The Cellar has been open for 14 years, it still gets mistaken for serving German food, like the previous restaurant. Sullivan’s menu changes based on the season but is more classic French mixed with American favorites. He takes pride in the charred baby romaine Caesar salad  ($8) and 14-ounce rib-eye ($45)

“I’ll put my rib-eye up against anyone else in town at twice the price,” Sullivan said. “It’s the best beef I can lay my hands on with my own dry rub.”

As Sullivan busily prepares food, Rollins greets guests and shows off the property’s unique history, like a giant D carved into the castle’s concrete by Blecha’s daughter when it was poured.

“When you take that history and intertwine it with an excellent chef and someone like me who likes history and bring together a culture of family, it becomes a unique, non-chain experience,” Rollins said.