Pizza Planet offers solid pizza if you manage to place an order when it’s open. 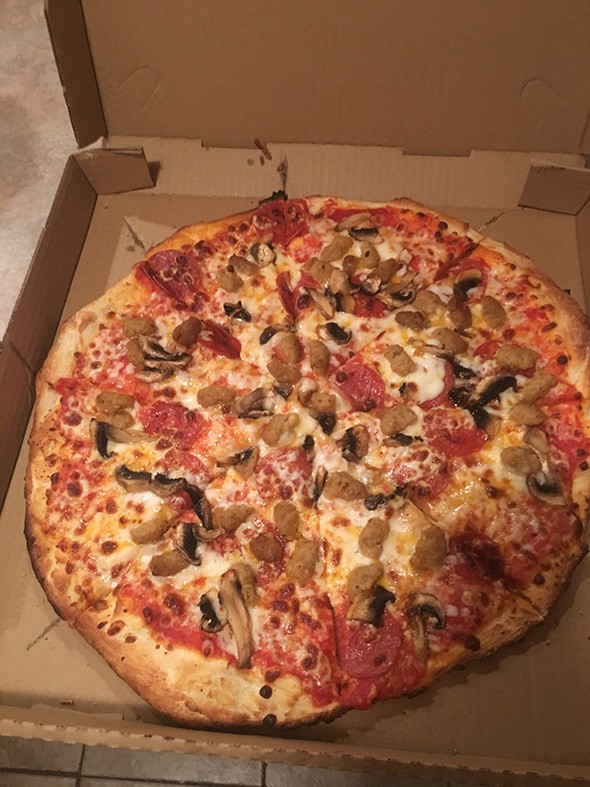 What works: The melted cheese and crispy pasta edges from the oven bake were fun.
What needs work: The restaurant has a long wait time and inconsistent hours.
Tip: Make sure it’s actually open because advertised business hours appear to be a suggestion.

I ate a pretty good meal from Pizza Planet, but I’m not sure if it actually happened.

Located at 1621 N. May Ave., at NW 16th Street, Pizza Planet might or might not be an actual restaurant.

Repeated attempts to follow up with the restaurant’s ownership throughout the week found the business closed despite the fact that its business hours — clearly listed on its sign — say that it is open daily at 11 a.m.

Was it all a dream? I don’t think so because a takeout container of pasta is still in my refrigerator. Perhaps it’s a Meet Joe Black situation and a ghost prepared my food? Wait. Was that the plot of the movie? I never actually saw it.

Anyway, one of my favorite food-related activities is checking out local, independent pizza purveyors in the city. This has led to finding a few favorites like the Luigi’s Pizza location at 7901 N. May Ave., where its standard thin crust and savory sauce are winners at less than $10 for a large pizza, as is its weekday lunch buffet. The venerable Pizza House at 2520 N. Pennsylvania Ave. serves a thick-crust pizza with ample cheese and mammoth calzones that can feed a family.

Other experiences can be affordable, but less memorable, like Argana Pizzeria and wackily named Pizza Zone, where the food was serviceable but not worth revisiting.

My experience with Pizza Planet is one-of-a-kind. I thought the pizza ranked in the upper tier of local, independent pizza of its weight class that excludes the likes of Empire Slice House, The Wedge Pizzeria, Sauced on Paseo and Pizzeria Gusto because they use better ingredients and charge higher prices.

While I found the food to be good, I find it impossible to recommend giving Pizza Planet a shot because its service is slow and you never actually know if it’s open.

"The restaurant advertises being open until 2 a.m. or 4 a.m., depending on the night of the week, but given my experience trying to get ahold of them, that is anyone’s guess." tweet this

After multiple attempts to speak with the owner, I gave up and called the bar next door, The Lost Highway. I spoke with an employee who said that they never know when Pizza Planet is going to be open either, and when they are open, they get angry at Lost Highway patrons for parking in front of the restaurant, even though the lease agreement states that the businesses are supposed to share parking space.

The world of online reviews for Pizza Planet is a wild ride. The overwhelming majority of ratings are either five stars or one star. I managed to find only one three-star review across multiple platforms.

As I perused reviews before ordering, I thought perhaps many of the one-star reviews were because of slow delivery after a night out on the town. The restaurant advertises being open until 2 a.m. or 4 a.m., depending on the night of the week, but given my experience trying to get ahold of them, that is anyone’s guess.

On a Monday night, I called in an order to Pizza Planet: one large American Favorite pizza ($13.99), which is pepperoni, sausage and mushrooms, and an Italian sausage marinara pasta dish ($7.99). The man answering the phone in a decibel not much louder

than a whisper said that it would be about 35 minutes for pick-up. I thought that was kind of a long wait time just for in-store pick-up but figured that possibly they had other orders.

I arrived at the store exactly 35 minutes after placing the call, and he said that they were still preparing the food. I went ahead and paid for the meal and waited in my car for another 10-15 minutes. The man taking calls appeared to be turning out fresh dough and preparing food. I asked him if he was in there by himself, and he said he had help. A woman showed up while I was waiting, but I’m not sure if it’s just them.

After the long wait, I found the food was better than I expected. After reading complaints online about a lack of cheese and cold orders, everything was warm and had plenty of cheese.

The crust is on the thinner side — somewhere between Luigi’s thin crust and Pizza House’s doughy hand-tossed crust — and it was uneven in spots, but it had a good flavor and served as a good vehicle for the toppings. The mushrooms were large and meaty, and Pizza Planet sourced my favorite kind of low-tier processed Italian sausage.

The pasta turned out to be penne, which is not listed on the menu. It was baked with a healthy portion of mozzarella cheese, more of that Italian sausage and lots of marinara. I liked the pasta that got crispy from the oven. The entrée is served with a piece of garlic bread that tasted like the kind you get from the grocery store freezer section and a salad that was leaf lettuce (surprisingly not iceberg) with onions, olives and tomatoes.

Judging just on food itself, I would err closer to four stars than anything else, but the wait time and price point ($26 total) knocks it down a few notches. Add in the fact that it has unpredictable operating hours and it’s difficult to recommend giving it a chance.

Pizza Planet has the tagline, “Experience a taste out of this world.” Maybe its owners have to travel from outer space to prepare each meal? A better tagline might be Pizza Planet: Where you can get some decent pizza, if the operators feel like it.