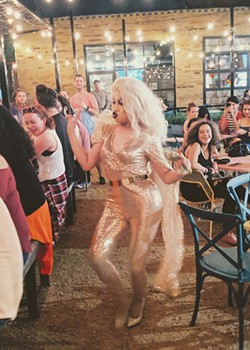 “I’m very introverted, and I was like, ‘Don’t pick on me,’” Rios said. “I’d go to The Boom, and they’d ask me questions, and I shut down immediately. I think that I didn’t understand drag.”

Sponsored by YesLove, Untapped: A Drag Xperience 9 p.m. Aug. 23 at Vanessa House Beer Co., 118 NW Eighth St., is an attempt to help people who might not be completely familiar with the art form to better appreciate it.

“It’s casting a net to a different audience that hasn’t had an experience or been exposed to drag shows,” Rios said. “I think a lot of people have sexualized drag instead of realizing that it’s actually just an art form and an expression. So in thinking about all that, we decided, ‘Let’s bring drag to these heteronormative spaces where you wouldn’t traditionally see drag or queer youth or queer people at all.’”

The show is the second in an ongoing series that Rios hopes will give people who might not feel comfortable in 39th Street District bars a chance to broaden their ideas about gender, sexuality and identity. Drag performances can reinforce the idea that “it’s OK to embrace yourself” despite the cultural influence of toxic masculinity.

“There’s something about drag queens that is empowering for most people because drag queens seem to be very bold and upfront and unapologetic,” Rios said. “When they are just regular men and they’re not in their drag, they may be completely different, but … it’s kind of like their superhero costume that they put on, and they just do these amazing performances and interactions with the crowd.”

Even among the LGBTQ+ community, drag performers can be misunderstood.

“I think in the gay community, there’s a lot of hatred towards really femme men,” Rios said. “People look down on it, so I think drag queens kind of fill in that gap. … They’re kind of a symbol of being able to tap into our feminine energy and be fearless and bold and courageous. … Men can explore being nonbinary or being more feminine, and it’s not this terrible thing.”

Gizele Monáe, who co-hosts Friday’s show with Jak’kay Monroe, said drag remains one of the misunderstood aspects of LGBTQ+ culture.

“It’s a lot easier to come out to your straight family as gay than it is to be a drag queen,” Monáe said. “There comes a lot of confusion when it comes to doing drag. We’ve come a long way in that, though. I remember when I first started drag, everyone thought I was transitioning, and they thought I was transgender — and that was usually from a hetero standpoint. A lot of people misunderstand that. Some of us, most of us actually, aren’t transitioning. It’s just a way to express ourselves as another gender, and that can be confusing.” 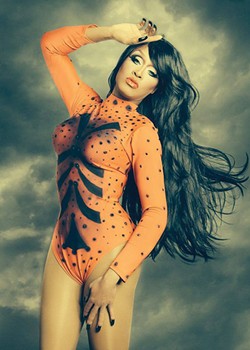 “A lot of the queens we know complain that on the strip, like, in the Gayborhood, that [venues] weren’t booking them because they were people of color, or it would be like the token one African American drag queen, or it would just be predominantly white queens, and there was a lot of racist things said to some of the queens of color,” Rios said. “So there was a lot of tension in the Gayborhood at the bars and the clubs. When we found out about this, we were like, ‘Well, why don’t we invite these queens to perform outside of the strip?’”

Monáe agreed that performers of color have a difficult time finding opportunities.

“It’s kind of hard out there for a black queen to get into these 39th Street venues,” Monáe said. “There’s a lot of excuses. They say you have to put a lot of work into it and come to the venue and blah, blah, blah, but the thing is, we can do that all day and still not be featured. … A lot of times, when you don’t have many people of color in your show, it tends to look like a color thing because the thing is, we’re not all the same. We all do different things. So if you’re not getting us for all these different reasons … it looks like another thing.”

Drag shows at nontraditional venues can also be less stressful.

“Sometimes we get tired of performing at the gay bars,” Monáe said. “It can be dramatic and messy sometimes, and then there’s always Bitter Betty on the sidelines, a bitter queen that is mad because we didn’t do something the way she would do it, but she’s never done drag before. I know with the straight venues, we’re not being critiqued when we perform. They’re just coming to see the show, but when you go to a gay bar, you are constantly being torn down to your damn toenails.”

However, more heteronormative spaces present their own set of challenges because audiences are not necessarily familiar with drag show etiquette. Monáe has performed at shows where audiences were talking loudly over the show or offering tips in a way that made performers feel uncomfortable.

“Women tend to like to play jokes on their husbands sometimes, and they’ll put money in front of their husbands,” Monáe said. “And that’s not always a good idea because it puts us in a bad situation because usually the husband doesn’t want to be bothered with the drag queen. They came to the venue because the wife wanted them to. They may not even want to be there.”

But often, drag shows can serve as an entry point to a better understanding of the LGBTQ+ community, Monáe said.

“You hear from people all the time, ‘Oh my god! I’ve never been to a show; I’ve been wanting to come to a show for a long time,’” Monáe said. “That’s usually their way to step into the community. They’ll go to a drag show before they go to dance at a gay bar.”

While RuPaul’s Drag Race has done much to take drag into the mainstream since it first aired in 2009, Rios said people are often unaware of the “local queens who are busting their butts and putting so much time and effort and money into their craft” and that live shows featuring queens, kings and nonbinary performers can be more representative of the diversity the art form has to offer.

“We’re living in this really cool era where drag is so different depending on who does it,” Rios said. “I’ve seen drag queens that use padding or drag queens that don’t have boobs; they just want to do flat-chest drag. It’s just not all pageant drag. A lot of Oklahoma drag has been pageantry drag, but there’s so many younger queens that are doing scary drag and making it very interesting and being very creative with their artwork.”