After 20 years of researching a massacre in Tulsa’s Greenwood District, Randy Krehbiel releases a book focused on the city’s coverage of the incident. 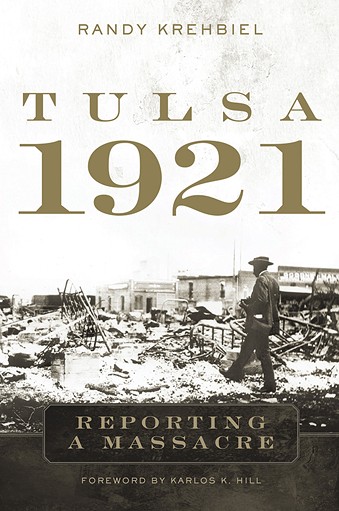 A strange whistle pierced the Tulsa night at 5 a.m. June 1, 1921. A white mob poured into the Greenwood District, home of one of the nation’s most affluent African American communities. By noon of the same day, the homes, businesses and churches dubbed “Black Wall Street” by Booker T. Washington were reduced to rubble and ash. Because of the chaos of the days that followed, the dead were uncountable.

In 1999, Randy Krehbiel began covering Tulsa Race Riot Commission for Tulsa World. He began collecting a trove of personal accounts, National Guard reports and newspaper clips all providing a scattered and often conflicting narrative of the two days of violence and suffering that continues to resonate almost a century later in modern Tulsa.

“Whether oral or written history, they all have their own perspectives,
their own inaccuracies.”
—Randy Krehbiel tweet this

He hadn’t yet considered writing a book on the topic as he was combing through information but was just trying to make the information easier to find for anyone else who wanted to research the Greenwood massacre.

Though he recalls phone calls from Tulsans frustrated that this black mark on the state was being drudged back up and tax dollars were going to searching for mass graves, Krehbiel noticed a growing hunger for a clearer picture of the massacre.

“There was already quite a bit of work done with oral history, but there hadn’t been a lot of work done looking at the newspapers,” Krehbiel said. “There was a lot of information in them; some of it you had to read closely and read it several times before you understood it.”

That is one of the most unique aspects of Tulsa 1921, the book Krehbiel published through University of Oklahoma Press earlier this year. The reactions of the time are revealed through editorials, slanted news coverage and the notable absence of the voices of the Greenwood residents who lost their homes, churches, stores and neighbors.

“When you read in newspapers, letters, reports and all the documents that are related, I came away awestruck with the pervasive racism of the day,” Krehbiel said. “I’m not exactly a bleeding-heart liberal, I’m not big into touchy-feely language, but it was appalling how people were treated. Their lives were so constrained.”

He recalled an account that a big source of racial tension at the time was that black people weren’t stepping off the sidewalk entirely as white people approached. He was also shocked by how openly racism was displayed within the newspapers, which is perhaps as telling as the actual details covered in the stories of the time.

“I grew up in the ’60s and ’70s during the height of the Civil Rights Movement, so even if you were racist, you didn’t want to advertise the fact,” Krehbiel said. “But in the publications of the day, it wasn’t something you had to disguise. It was the norm.”

That is why the coverage was so informative even as the actual specifics of the night remain murky. The events that started with an incident in an elevator that quickly escalated to a lynch mob and then full-blown riot so quick and chaotically that Krehbiel said it was near impossible to get all the pieces into the right places. His attempt to assemble a definitive timeline of events would remain allusive because so many accounts contradicted each other while others might have been tainted by rampant propaganda and rumors swirling through Tulsa.

And the newspapers were not immune to the misinformation.

“It’s like that old adage that journalism is the first draft of history,” Krehbiel said, “but whether oral or written history, they all have their own perspectives, their own inaccuracies, so I was always asking, ‘How much can I rely on this?’”

So we won’t ever really know what that whistle was that blew that morning or whether it really was a signal to start the advance on Greenwood. In fact, Krehbiel writes in the book that it’s possible that there was no whistle at all.

In the days following the massacre, then termed a race riot, any African Americans still within Tulsa were forced to wear identification cards bearing their identities and the signature of an employer in order to be able to move around town freely. Otherwise, they were sent to the fairground camp for protective custody. Armed guards were placed on major roads into town to reassure residents, and Krehbiel wrote that on one occasion those guards “mortally wounded a hapless white picnicker on Sunday evening” and on another shot at a grocer headed to a meatpacking plant.

The nearby black community of Red Bird published a letter in the World insisting that they weren’t organizing a revenge attack on Tulsa, disputing widely circulating rumors that threatened to redirect white mobs statewide to every black town or community. Editorials and Sunday morning sermons spun the events to place blame on the Greenwood residents.

“We must not make a martyr of the negro, even though many hundreds of them have suffered innocently,” Krehbiel quoted Reverend J.W. Abel from the First Methodist pulpit. “There are all too many of the so-called leaders of the negro race who habitually discredit the white race as to our willingness to give the negro a chance under all of the rights to American citizenship. … We tax ourselves to educate him; we help him to build churches, we are careful to keep him supplied with work at a good wage, and trust him with a ballot, and all we ask of him is to behave himself and prove himself worthy of our trust.”

Even more vitriolic and dismissive voices blasted out from the lecterns and editorial pages in the days and weeks to follow. Greenwood residents returning to the wasteland of Black Wall Street faced repeated obstacles from the city government and private organizations, yet in the story’s most surprising turn, the African American community did not capitulate to the pressure of white Tulsans trying to push them out.

“Before I started this project, I’d never got a good handle on how many of the black residents came back and stayed and persevered,” Krehbiel said. “There were a lot that left, but there were also those that came back, stayed and rebuilt. There were even some who moved in because of it, because it was an opportunity.”