Prior to the opening of Good Times, 1234 N. Western Ave., in June, co-owner Claire Hampton admitted that she had some apprehension about its location, which was previously Fat Dog and changed concepts a few times over the years.

“The location scared me the most, not if we could execute it well,” Hampton said.  “I think we have good ideas, but the location kind of worried me. Sometimes locations are cursed, but so far, it has not been an issue.”

Not only has Good Times, armed with a spacious patio and inventive drinks like frozen cocktails and alcohol-filled pouches that essentially become adult versions of Capri Suns debuted to lively crowds, but the area will be bolstered as the ownership group is reviving Drunken Fry across the street later this year.

Rod Meyer of Deep Fork Restaurant Group and previous Drunken Fry proprietor is partnering with Shyon Keoppel, who owns the former Beauty’s Cafe at 1244 N. Western Ave., to revive the Drunken Fry, which left the Donnay Building in early August as the historic building began undergoing renovations. Hampton and Zack Moore will help update the Drunken Fry’s food and bar menu, much like they did together for Good Times, where they are co-owners.

“It’ll be the same old Drunken Fry, and we will try to stick to its roots,” Hampton said. “I love Drunken Fry, and it was one of the first bars I went to in Oklahoma City, and it will always be special to me. It is crazy that this is happening. I want to keep its integrity and for it to be the same dirty dive bar that it’s always has been.”

Drunken Fry is tentatively scheduled to open before the end of 2018. The addition of the Drunken Fry will hopefully turn the area into a destination, where customers flow from one establishment to another.

“That’s what is most exciting,” Hampton said.

Good Times operates as what Hampton and Moore refer to as an “upscale dive” in which prices are affordable (imported Victoria beer is $2 every day) and the walls are bright and clean, but artful graffiti is encouraged in the bathroom in an attempt to promote happiness for something that will happen anyway.

“I’ve had a few friends that do graffiti, and they said they’ve never walked into a bar and had someone hand them a marker,” Moore said.

Moore and Hampton are both veterans of the bar and restaurant industry — Hampton serving as a craft cocktail mixologist and Moore working both in the kitchen and front of the house. They were both adamant that they wanted an unpretentious atmosphere where people can feel like themselves. 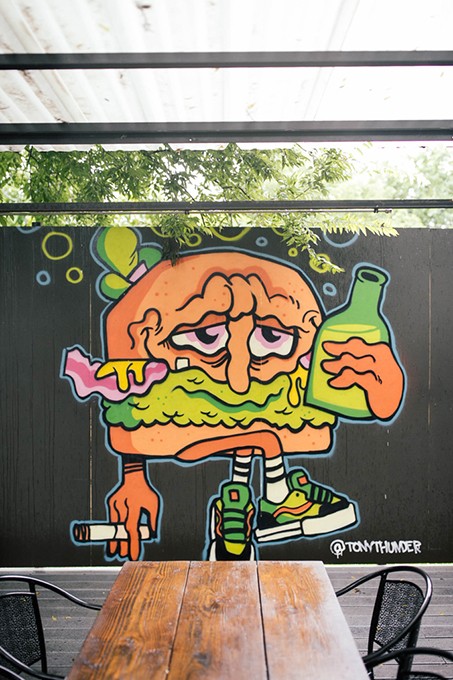 “We took everything we ever wanted in a bar that didn’t exist and put it in this one, and it’s worked out pretty well so far,” Hampton said.

Hampton’s sister was in Washington D.C., drinking a wine cooler from a pouch, and it gave her the idea to do something similar at Good Times, but make it a cocktail. The pouches sell for $10 and are equivalent to two drinks. They are available in blue margarita, rum punch and vodka cranberry lemonade.

“We thought it would be perfect for the patio,” Hampton said. “We were heavily inspired by Austin [Texas] patio bars.”

As the winter gets cooler, the patio — which is surrounded in colorful murals by local artists — will be heated.

“It’s amazing and done so well that we had to keep it on the menu,” Hampton said of the Painkiller.

“The nutmeg is crucial; it brings it all together,” Moore said.

The kitchen at Good Times stays open until midnight. Everything on the menu can be prepared vegetarian, and a majority of items can be served vegan. The menu is what Moore and Hampton refer to as “stoner food.”

The restaurant serves a nacho cheese Dorito-crusted fried chicken, which is available as a sandwich, inside a French fry burrito or a quesadilla. It offers two types of chili: one standard and a vegan variety made with Beyond Meat crumbles. Stoner nachos have been another big hit, which are gluten-free and vegetarian-friendly.

“I don’t eat meat, so it was important to me,” Hampton said. “Oklahoma City is kind of lacking in that department when it comes to bars. There’s definitely nothing I want to eat open after 10 p.m., so hopefully this can be a destination.”

Polaroid photos line the wall at the front of Good Times after guests walk through the entryway with work from artist Kris Kanaly and through a converted retro refrigerator door.

The idea is for photos of guests to cover the entire main seating area of the bar and restaurant.