Alley Café isn’t as bad as its low Yelp scores, but it’s a misuse of one of the city’s best locations.

7/17/19 Update: Alley Cafe has changed its concept under the direction of Chef Reuben Carey to create Rew Orleans, and it is a totally new experience.

Alley Café opened in August last year in the heart of the trendiest part of Uptown 23rd District, and it’s almost an act of cognitive dissonance as you drive and see it positioned between The Drake Seafood & Oysterette and Bunker Club.

It’s two upscale and sleek concepts sandwiching Alley Café, 447 NW 23rd St., with its white sandwich board and minimalist signage that is like stepping into a time portal taking you to the 23rd Street that existed before Cheever’s Cafe and Big Truck Tacos helped usher in the modern era of foodie eateries on that once left-for-dead part of the city.

The husband and wife who own the building operate the Alley Café, and the other half of the structure is occupied by Truong Thanh Supermarket that has been boarded up since I moved to Oklahoma City in 2017. I get the impression that the owners got tired of seeing their space go unused as more development is pumped into the area.

In our sister publication, OKC Talk, there are stories of the owners taking exception with patrons parking outside their boarded-up business and going elsewhere in the city, even though it is public street parking.

The whole venture seems odd, and it’s only exacerbated by its offerings. The menu is a haphazard collection of classic French-American dishes like Italian beef sandwich and steak au poivre with Korean and Vietnamese elements like spring rolls, Vietnamese pancakes, Korean soups, short ribs and stir-fries. It suffices to say the cognitive dissonance doesn’t end when you enter the restaurant. 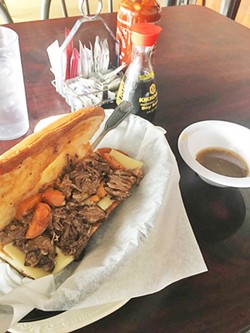 After I noticed that all three of Alley Café’s Yelp reviews gave the restaurant one lowly star, I pitched a potential review to my editors with the question: Is this the worst restaurant in the city? The reaction has not been good beyond some sanitized Google reviews. I have never seen it very busy when I drove past, and it didn’t seem as if its owners were operating with the intention of serving the best quality food, merely hoping to profit off the area’s growth or hope that someone stumbles in after a night at Bunker Club.

I went to Alley Café recently, right at noon. As the surrounding restaurants like Scottie’s Deli, HunnyBunny Biscuit Co., Ur/bun and The Drake attracted solid lunch crowds, I was the only customer in Alley Café for my entire 45-minute visit.

I walked in and wondered if they were open for business, perhaps in spite of the flashing neon “open” sign because there were no employees present. I then noticed a bell on the bar with a note asking to ring for service. I’m not sure why they can’t install a bell on the door, but things were not getting off to a promising start.

After one of the owners came out and sat me in a booth near the entrance, I ordered food and began the wait. During the 22-minute wait, which I passed by listening to the always-entertaining Rewatchables podcast on The Ringer network, I began to wonder if anyone else would enter the restaurant.

I got excited as a man with a long beard and a full backpack approached the door. “All right; another customer. Maybe he’s a regular,” I thought to myself. The man propped the door open and gestured to me. I took my earphone out, and he said, “I feel compelled to tell you that God doesn’t want you to be judgmental.”

I didn’t know what to do except give him a thumbs-up. Instead of a customer, he was just the kind of guy who looks like he might spend his days telling strangers about the word of God.

I was the only customer in Alley Café for my entire 45-minute visit. tweet this

It should be noted that while most people know John 3:16, the following verse is “For God did not send his Son into the world to condemn the world, but to save the world through him.” Jesus was not here to pass judgment, and I was not expecting such a metaphysical experience, especially since it’s my job to provide restaurant criticism for the city. I take pride in providing honest feedback. How can you trust me to tell you that a restaurant is good if I don’t also tell you when one delivers a subpar experience?

After the interaction with the stranger, which did leave me wondering if it was some elaborate way to try get a good review (even though I keep an anonymous profile), I did re-evaluate my expectations for Alley Café. I cleared my mind of those one-star reviews and continued waiting.

I ordered the “Italian” beef sandwich with fries ($9.99) and “sushi” ($7.99), which is a totally normal combination to order at a restaurant (looks at the imaginary camera like Jim on The Office). The beef sandwich was advertised on the menu as one of the restaurant’s most popular items. I included quotations around each item because neither item delivered exactly what was advertised.

The sandwich was actually a pot roast sandwich that had a few stewed carrots, white American cheese and au jus for dipping. It did not have the marinated mixture of vegetables, giardiniera, required to truly be an Italian beef sandwich. The only place in the city I know that serves a true Italian beef sandwich is the Callahan’s Chicago Dogs food cart, which I profiled last year after they went viral on Twitter. It is usually set up at the corner of NW 122 Street and Rockwell Avenue during lunch and routinely serves at Edna’s, 5137 Classen Circle, on the weekends. 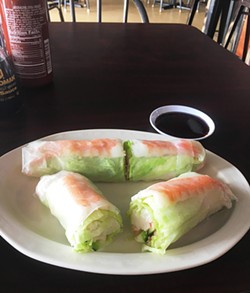 As a pot roast sandwich, it was perfectly serviceable and the beef was tender. The fries were OK, but the house sushi that I ordered came out as spring rolls wrapped in rice paper instead of seaweed. When I inquired about the difference, the owner said that people enjoyed it more served like a spring roll despite the fact spring rolls are listed separately on the menu. The roll itself lacked the punch of cilantro and fell flat with some bland iceberg lettuce, extra rice noodles and cucumber. The crab and shrimp were of low quality, and it didn’t spark any joy in my life — the central tenet of Marie Kondo’s hit Netflix organizing reality show Tidying Up with Marie Kondo.

Overall, Alley Café was not the worst experience I’ve had while on review at a restaurant. I’ve found hair in my food, been overwhelmed by bad technique and too much grease at El Toro Chino in Norman and been severely disappointed for what was delivered at its price at The Manhattan, where subsequent trips have ably rectified that one bad experience.

I’m sure if you hunted on Alley Café’s menu, you might find something really good. The owners could not have been more friendly and the beef sandwich delivered, but Alley Café just feels like a missed opportunity in such a prime real estate.

What works:What’s billed as an Italian beef sandwich actually works as a pot roast sandwich.

What needs work:The menu doesn’t always deliver what is advertised, like the sushi, which are actually spring rolls.

Tip:Ring the bell for service.