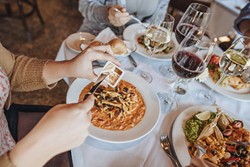 Sitting in a posh tea shop next door to a tony seafood restaurant a stone’s throw from a historic theater and a thriving bar scene, it’s easy to forget that Uptown 23rd Street used to be pretty down. If you’re Christina Chicoraske, who has spent a sizable amount of time on 23rd Street — first as a student at Oklahoma City University, then as an employee and now as the district’s executive director — you remember.

In this case, “it all” includes the culinary renaissance spurred by Cheever’s Cafe, Big Truck Tacos and Thai House Restaurant and the return to prominence of nearby neighborhoods.

In its third year, the annual event is a celebration of all things 23rd Street, with wine and beer from Byron’s Liquor Warehouse and food from the ever-expanding roster of restaurants that keep popping up along the bustling stretch of road. 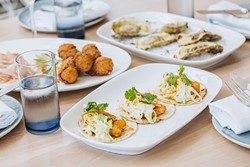 “Uptown Uncorked accounts for 40 percent of our budget,” Chicoraske said.

Salaries, marketing, a hefty beautification fund and identification signs are all dependent on the event.

Medians and sprinklers might not be flashy, but those improvements set the street apart from other city thoroughfares.

Rather than a silent auction, this year’s Uptown Uncorked features a raffle with prizes including an Oklahoma City Thunder package, an Anytime Fitness membership, a personal class at Urban Teahouse and lots of swag from Byron’s — last year, the liquor emporium gave away a Pabst Blue Ribbon scooter/beer cooler combo.

“It raises more money for the district, but it also gives people a better chance to go home with something cool,” Chicoraske said.

For the people in surrounding neighborhoods, including Gatewood, Mesta Park and Heritage Hills, the prize is a district that is becoming more walkable and enjoyable.

“In the last year, The Rise has really catapulted everything else,” Chicoraske said of the mixed-use shopping center. “Even finishing a parking lot makes a huge difference. Every step is making Uptown 23rd a place that more people want to visit.”

She said the opening of Pizzeria Gusto and The Pump Bar and the return of Open Streets OKC and a farmers market are big draws.

Another big addition in the last year is Korean fusion restaurant Chae, 1933 NW 23rd St., which Chicoraske said sets a marker farther west and shows there’s still plenty of room to grow. The restaurant will serve bites alongside Tucker’s Onion Burgers, Pizza 23 and Rockford Cocktail Den at the event.

Uptown Uncorked has three ticket levels: VIP tickets are $65 and include food, drink and entry to the event an hour early at 6 p.m.; general admission tickets are $40; and designated driver tickets are $25. Tickets are available at uptown23rd.com.