Urban Johnnie, the modern version of an Oklahoma City institution, excels in its sports bar concept 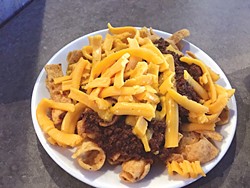 An Oklahoma City hamburger tradition that began on Western Avenue at the Split-T transformed into mainstay Johnnie’s Charcoal Broiler, which has eight metro locations, in 1971.

Founder David “Johnnie” Haynes began cooking burgers at home using a dual method of gas and charcoal while he managed the Split-T and brought the technique with him when he opened his own restaurant. David Haynes died in 2000, but his sons Rick and David continue the family business.

Under the leadership of the new family, the Haynes brothers have expanded the reach and concept of Johnnie’s. They founded West bar and restaurant in 2007 but recently transferred ownership to restaurant group Provision Concepts (Hatch, Broadway 10 Bar & Chophouse, Sidecar Barley & Wine Bar).

In 2013, the brothers launched Urban Johnnie Bar & Grille at 121 NE Second St. in the Deep Deuce neighborhood on the bottom floor of the Level Urban Apartments complex. The sports bar concept is designed for a younger, hipper customer looking to take advantage of the booming and rapidly gentrifying neighborhood.

Urban Johnnie takes the Johnnie’s Charcoal commitment to timelessness and pushes it into the 21st century by adding salads (including one with kale), entrees like pot roast and grilled, fresh and updated specialty burgers.

The original Johnnie’s popularized the Cheese Theta Burger (mounds of shredded American cheese and Johnnie’s hickory sauce) and the Caesar Burger (Caesar-dressed lettuce on top of a beef patty). I can’t say that I expected an Oklahoma institution to pair beef and salad, but here we are.

Urban Johnnie has both of those classics on the menu but has updated them. The Cheese Theta includes house-made pickles, and its Caesar features romaine lettuce, which has actual nutritional value when compared to the iceberg-topped Johnnie’s Charcoal iteration.

I was surprised to see that half of Urban Johnnie’s specialty burgers are beef-based, and the menu even features two vegetarian options, including the Hummus a Tune, which tops the veggie patty with hummus and grilled onions. While I’d never expect a veggie patty to replace a beef one — I’ve yet to try the Impossible Burger, which aims to do just that — I immensely enjoy a well-made black bean or other plant-based protein burger.

I nearly went with the veggie patty, but for review’s sake, I ordered Johnnie the Greek because a chicken burger is the ultimate test for a burger chef. How do you keep the patty from becoming too dry?

Johnnie the Greek ($8) features a chicken patty topped with julienned red peppers, onion, feta cheese and Greek dressing. I figured the dressing would help in case the filling erred on the dry side, but it didn’t need it.

The burger arrived as aesthetically pleasing as possible. Marinated olives and pepperoncini join an overflowing amount of romaine salad topping the burger. You eat with your eyes first, as the saying goes, and I was ready to dig in. The burger stands on its own, providing a taste of fresh herbs, but it’s elevated with the sweet and bitter notes of the salad.

I was impressed with the price point. At only $8, Johnnie the Greek is something I would expect to see at $12-$14 on a menu without batting an eye. Of course, sides come as an additional item, so it’s a way for the restaurant to increase its profits without building the side into the burger.

I thought about getting The Vegetarian Wolf: a veggie patty topped with vegetarian chili. So I decided to split the difference and order a kids version of the Frito pie as my side.

I went in thinking it would be a menu highlight, especially when a full-sized portion is available as an entrée, and was disappointed. The all-meat chili lacked any flavor beyond salt and was fairly dry, not providing the soupy coverage of chips for which I was looking. The cheese also arrived unmelted, which I assume is how it has always been done at the Johnnie’s Charcoal Broiler, but expecting lukewarm chili to melt the cheese was asking too much.

If the Frito pie is any indication, I’m not sure I can recommend Urban Johnnie’s foray into entrees. Urban Johnnie excels at its main mission: burgers and friendly service. Hostesses and wait staff couldn’t have been friendlier and genuinely happy as I dined. It was also great to leave feeling satiated without being weighed down. Usually a hamburger for lunch will have you looking to pull a George Costanza and nap under your desk.

I look forward to my next trip to Urban Johnnie.

What works: Its chicken patty exudes flavor without being dry.

Tip: Entrees are nice, but stick with the burgers.