Kristy Jennings, owner of Urban Teahouse, is a nice woman. So even though she probably wants to walk down the tea aisles of every grocery store, slapping boxes of pulverized Earl Grey out of people’s hands, she won’t.

Instead, she is busy at the second location of her tea-lover’s paradise, 519 NW 23rd St., behind The Rise shopping center, where the sun shines brightly through giant windows. (The original location, 7518 N. May Ave., continues its brisk business on the northwest side of the city.)

Commercially bagged teas are filled with tiny, dusty particles of tea leaves, and they give off all kinds of weird, bitter flavors that require lots of sugar to cover up.

Urban Teahouse, on the other hand, has giant canisters filled with lovely whole dried tea leaves of every variety you can imagine and some you probably can’t.

Don’t get me wrong — there’s nothing wrong with enjoying a cup of English Breakfast tea or a soothing chamomile. But if you’ve ever been in Urban Teahouse, you’ve probably wondered just what Iron Goddess of Mercy tastes like.

Let me tell you: It’s good.

Urban Teahouse teas are separated by price levels: specialty is $3, premium is $4, exceptional is $5 and reserved is $6. Dragonwell is a reserved green tea from China.

I thought it was very mild. I guess I don’t consider many teas “hardcore,” but this one is particularly mellow. It’s not a hard-partying brew. It’s a leisurely, Sunday evening, doing a crossword in bed, preparing for a good night’s sleep brew.

I did not try it with sugar, but I get the feeling that sugar would completely overwhelm the flavor, which I thought was kind of wheat-y, like a cereal grain.

Iron Goddess of Mercy is another reserved tea, but while the Dragonwell has long, flat leaves, this oolong comes out of the canister in tightly wound balls.

After a few minutes steeped in water, however, they unfold and release their precious flavors.

Jennings said that Iron Goddess of Mercy will not cleanse you of all your sins, nor does it count as community service if you’ve been arrested.

But it does have a nice, smooth, grassy flavor to go with the light gold color and eases you into and out of each sip. I thought it had some hints of flower.

Also of note, despite being one of the more expensive teas, is that Iron Goddess of Mercy will give you multiple infusions, so it’s a good bang for your buck.

Golden Monkey is a reserved black tea. Its leaves are curled lengthwise and their tips are golden-hued. The resulting drink is a bit darker and has some great fruit notes, like raisin or fig. It had the most caffeine of the teas I tried, but it won’t get you buzzed like an espresso.

For a huge energy blast, get the matcha latte ($4.50). Matcha isn’t just a tea infusion — you’re eating the whole leaf. The milk eases the punch, and I like adding a little simple syrup to it.

This is your party tea. You could fight a bear after drinking one of these, but that wouldn’t be fair to bears.

Yerba mate ($3 for a 16-oz. cup or $3.50 for a 16-oz. teapot) is a specialty tea, except it’s not really a tea. It’s a type of holly bush. It’s a little more processed than some of the other teas, in that the leaves have been crunched up, releasing more flavor (and a little bitterness) into the liquid.

It was very green and lively, though mild.

Jennings said this was a divisive flavor, and I can see why — without sweetener, I found the flavor bitter and off-putting. But when she added a bit of simple syrup, it didn’t become sweet, but it did rob it of that pungent aftertaste.

Though it’s not particularly well-known for its food menu, Urban Teahouse does carry some locally made doughnuts from Holey Rollers and chef-created chocolates from Dude, Sweet Chocolate, a boutique confectionery out of Texas.

The most interesting one is albatross ($2.75) with dark chocolate covering a core of blue cheese and sea salt. If that sounds weird, it is.

Yes, there always will be mint teas and chai and Earl Grey available.

But walking on the wild side at Urban Teahouse is a pretty mellow and informative experience. 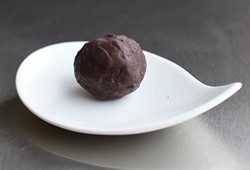 What works: Iron Goddess of Mercy is a tasty adventure. Matcha latte will blow your doors off. What needs work: Lapsang souchong is an acquired taste. Tip: Ask Kristy Jennings anything. She’s a tea fanatic who loves to teach.