On this tour, the classic rock group’s itinerary skips Oklahoma City (historically a band stronghold), so a road trip to Austin, Dallas or Houston is likely in order for fans who want to see David Lee Roth with Eddie, Alex and Wolfgang Van Halen.

On this tour, the classic rock group’s itinerary skips Oklahoma City (historically a band stronghold), so a road trip to Austin, Dallas or Houston is likely in order for fans who want to see David Lee Roth with Eddie, Alex and Wolfgang Van Halen.

Van Halen has sold well over 55 million albums in the United States since its eponymous debut in 1978, according to the Recording Industry Association of America.

Records Van Halen and 1984 sold over 10 million copies each with flamboyant, glitter- and spandex-clad Roth at its helm. Sammy Hagar-fronted years brought the act another 16 million sales before reuniting with Roth (if you forget the intervening interlude with Gary Cherone as lead vocalist, which a lot of us tend to do).

Its long, party-filled, complicated and colorful 37-year history is celebrated on this tour, as is the release of a band biography, Van Halen Rising: How a Southern California Backyard Party Band Saved Heavy Metal, by Tulsa author Gregg Renoff.

Here’s a flashback to notable Oklahoma concerts from the Roth-led eras.

Van Halen’s first Oklahoma concert was booked for a mere $500 and came just eight weeks after it released its eponymous debut.

“Van Halen tour manager [the late] Noel Monk’s influence at Warner Bros. was the reason this show happened. He loved Cain’s,” said Larry Schaefer, former owner of Little Wing Promotions. “Eddie spent a lot of time in my office because I had a bunch of old Stratocaster and Telecaster guitars lying against the wall. And he commented that I had more guitars than him at that time.”

Schaefer booked and promoted acts for Cain’s Ballroom and other venues and festivals across the state.

“They were just becoming huge; every hour, they were getting bigger. In fact, I booked Van Halen to come back and open for Journey at the Tulsa Assembly Center,” he said. “By that point, they had become so big that they didn’t want to open for them and pulled out of my show, which meant we went from a sell-out to a half-empty house.” 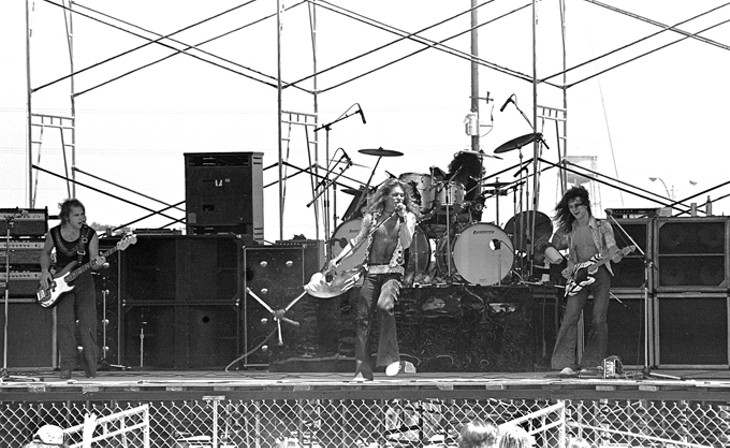 The Super Rock 78/The Oklahoma Jam festival featured live acts on two stages. There were many legendary moments at this event, but a favorite is when Roth approached his idol, Black Oak Arkansas lead singer Jim Dandy, backstage, leaped onto a table, danced and bet the musician he “could get more dollars” than Dandy. As the story goes, Dandy accepted the challenge and lost.

Fans and critics widely agreed that the eye-opening, agile opening act easily upstaged the headliner, Black Sabbath, on almost every night of this tour. 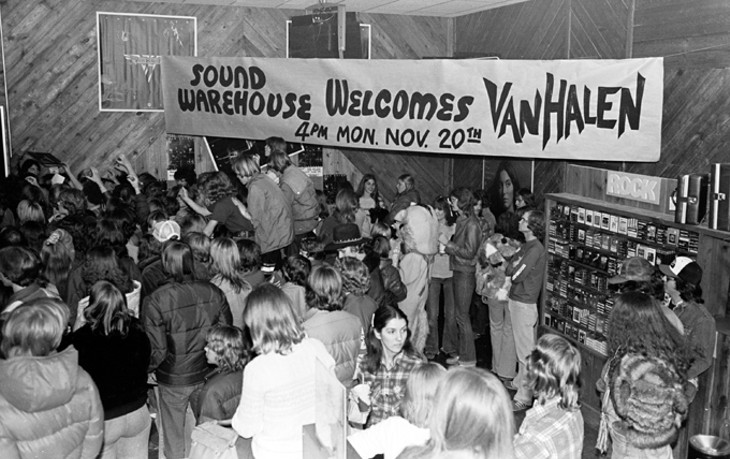 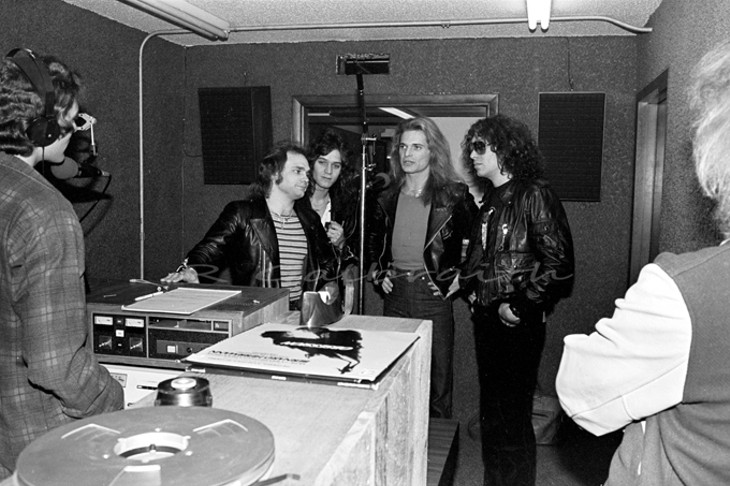 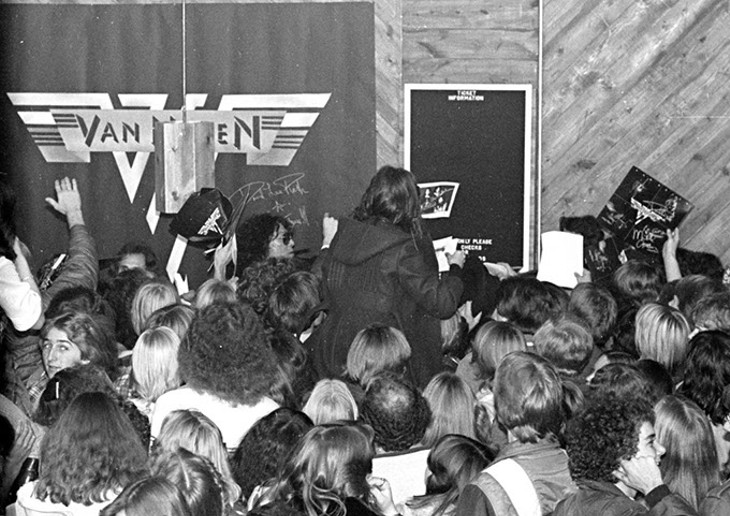 The young band made an on-air appearance on The KATT radio station before swinging into a new, local Sound Warehouse shop for an uncommon in-store autograph session with fans.

“Van Halen was very savvy, even back then,” said Screams drummer Brad Elvis Steakley. “They weren’t at the peak of their popularity yet ... They’d booked the tour purposefully playing smaller arenas, in the 5,000-7,000 range, knowing it was better to sell out a 7,000-seat arena than it was to sell half of a 20,000-seat place. That way they could claim the entire tour was sold out, which it was.”

The tour’s final show was at The Forum in Los Angeles. It sold out close to 20,000 seats “in an instant,” and Steakley asked Eddie Van Halen why the band didn’t just book a second concert.

“He said, ‘If we sell out one show this tour, it makes it easier on ourselves for the next tour,’” Steakley said.

Frenzied fans made this show more memorable than most after a near-riot exploded. Concertgoers pulled themselves onto a ramp extension and became part of the concert. 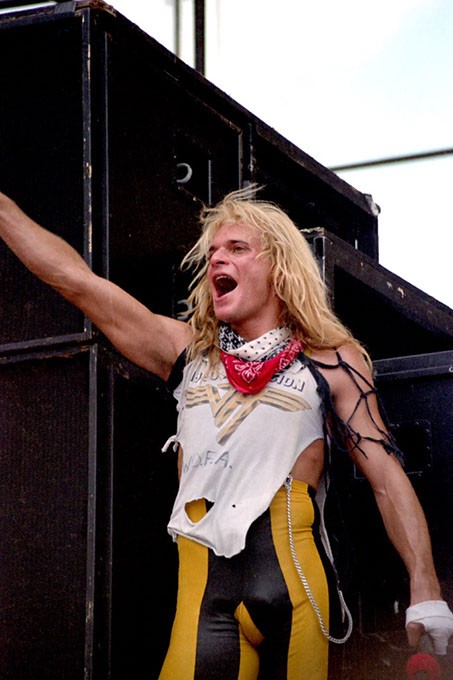 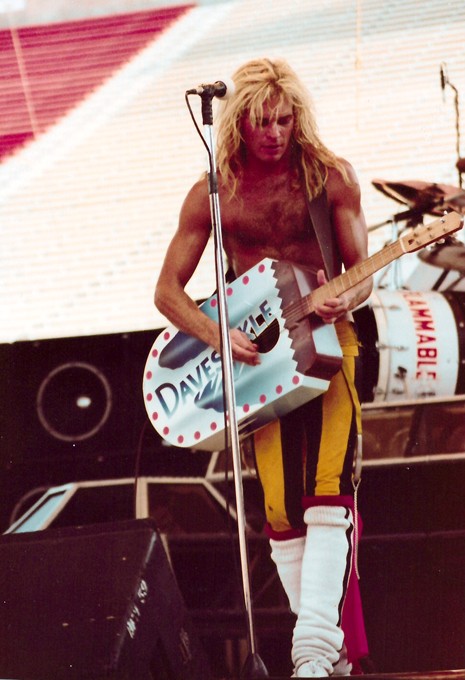 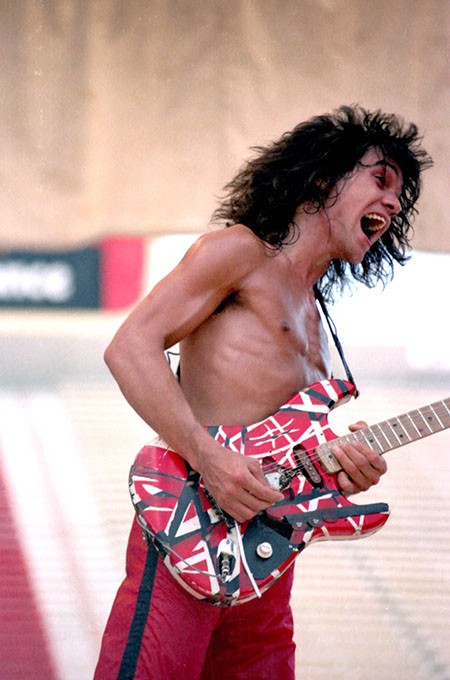 This marked the only Sooner State stop for the band during its Invasion ’80 World Tour. Oklahoma’s first daytime rock festival, Rocklahoma, featured a 75-minute Van Halen performance. Fans in attendance included OU football coach Barry Switzer, who admitted to local media that he went with his sons to see festival headliner The Doobie Brothers.

This event is memorable for fans because the bill also included Sammy Hagar, who would replace Roth as Van Halen’s lead singer in 1985.

It’s also notable because Norman police told press it worried about controlling the crowd of over 31,000 and installed a video surveillance system.

Valerie Bertinelli remembered the event in her best-selling 2008 book, Losing It: And Gaining My Life Back One Pound at a Time, saying it was her first date with soon-to-be husband Eddie Van Halen, and they spent a lot of time chain-smoking in a local hotel as they got to know each other. In 1974, Bertinelli briefly resided in OKC and reportedly attended a semester of classes at Casady School. 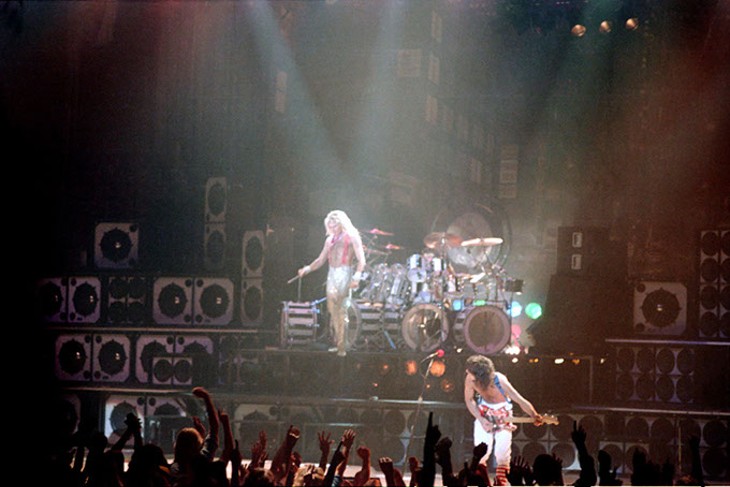 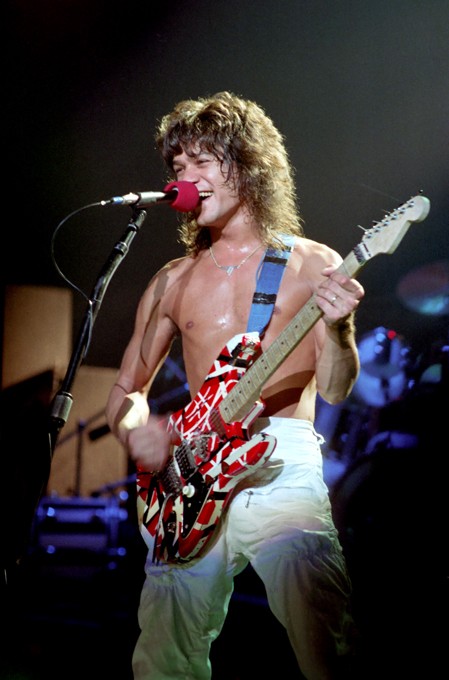 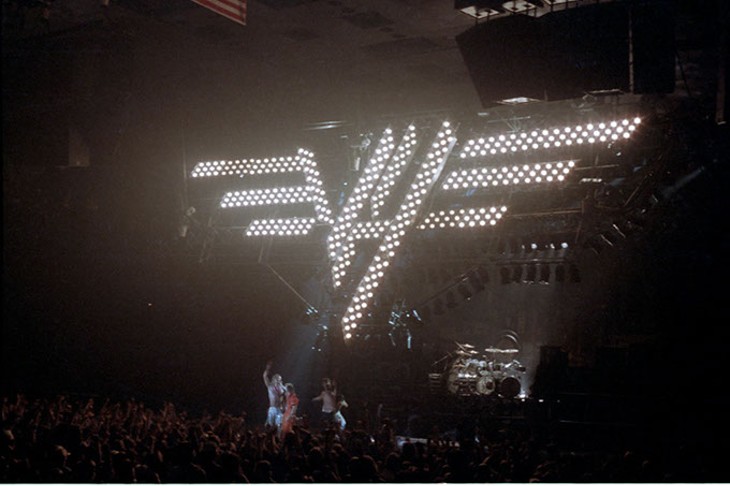 Van Halen rode high on this tour, largely due to the popularity of three live music videos — “Hear About It Later,” “So This Is Love?” and “Unchained” — recorded in Oakland that May.

“When I booked them into Lloyd Noble, by then, they were big stars,” Schaefer said. “I vividly recall Eddie had a skinny little Valerie Bertinelli on his arm.” 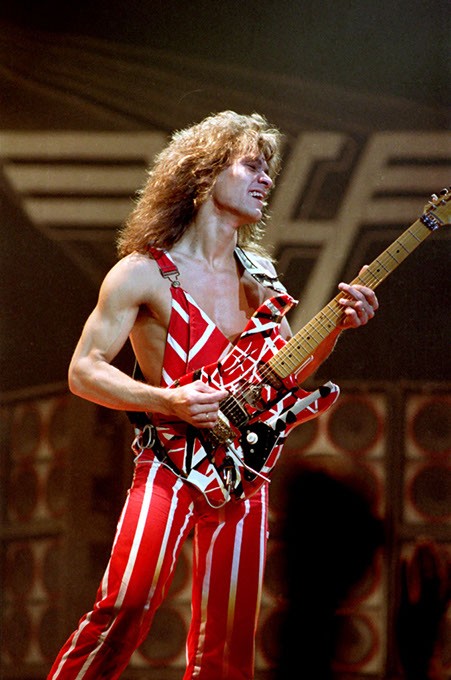 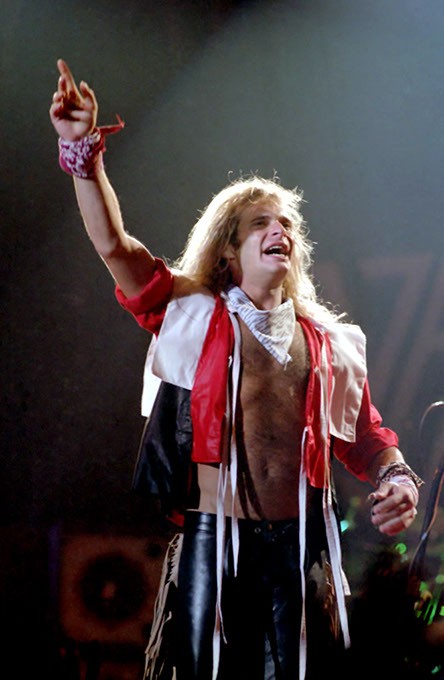 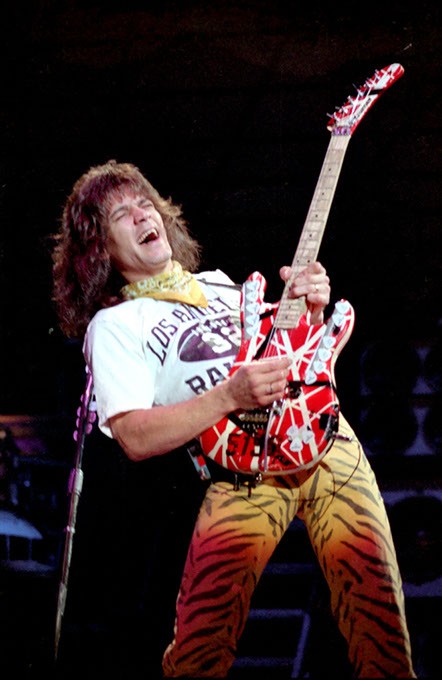 This tour’s colossal production helped define Van Halen as the biggest band in the world. It was one of a few rock acts that could sell out multiple shows in the metro. During those hot summer days, it holed up in the Sheraton Century Center Hotel, the lobby of which was filled with dozens of fans as they tried to catch a glimpse of the quartet and nearly caused a riot. 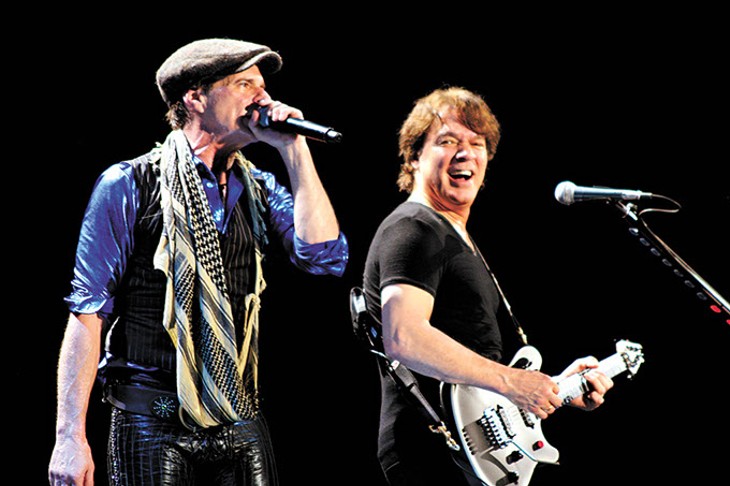 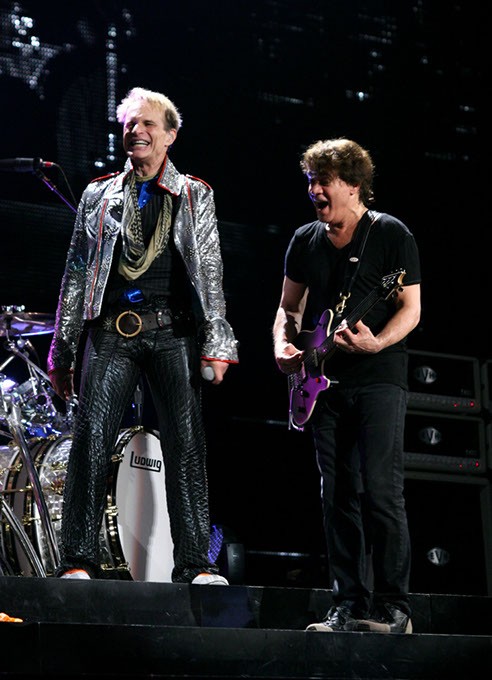 The group’s first Roth-led Tulsa performance in almost three decades saw the return of fan-favorite “Unchained” to its rightful opening slot in the set list. As with the 2008 tour, Wolfgang handpicked the set list.

About the author: Curt Gooch is an Oklahoma City-area resident, writer, musicologist and co-author of And Party Every Day: The Inside Story of Casablanca Records and KISS Alive Forever: The Complete Touring History. He has long gathered quotes, articles and knowledge about modern rock music and how it influences American culture. 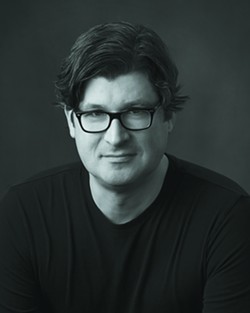 Tulsa author Gregg Renoff's book, Van Halen Rising: How a Southern California Backyard Party Band Saved Heavy Metal, hits shelves in October and can only be classified as a must-purchase item for band fans and anyone else who wants to revisit the post-Vietnam/pre-AIDS glory days of American pop culture.

This engaging read does what great books should: It puts the reader right into the story. Interestingly, Renoff chose not to rehash the oft-told tale of Van Halen's glory years with David Lee Roth and instead examined the band’s white-knuckled pre-fame days between 1972-’78 in-depth.

Renoff spent five years researching and interviewing more than 230 peers, family and friends of the band. This is the first time anyone has attempted such a tome, which transports readers back to the golden days of analog recording. Its nearly 400 pages also features 46 never-before-seen candid photos from live shows, backstage and hotel rooms, including one of the quartet in bed together.

As with The Complete Beatles Chronicle by Mark Lewisohn or KISS Alive Forever by Jeff Suhs and yours truly, Van Halen Rising certainly stands out as the single most authoritative document about its subject matter — in this case, the story of how four Southern California kids become the world's greatest party band. — By Curt Gooch

Print headline: Unchained; Van Halen’s long and storied career is celebrated with a world tour and a new band biography.