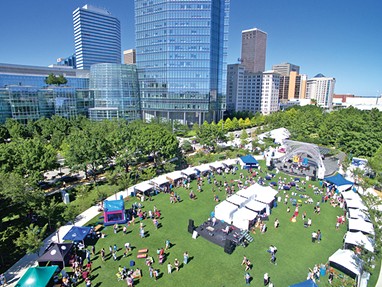 Signs of the increasing support of vegan and vegetarian lifestyles were highlighted in a report from market research firm Mintel earlier this year that showed non-dairy milk sales in the United States increased by 61 percent between 2012 and 2017.

The U.S.’s dairy milk consumption dropped 22 percent between 2000 and 2016, according to the national Department of Agriculture, and the numbers back up anecdotal stories like the one from Oklahoma City resident Donna Brogan, who went vegan with her husband in 2008.

“[In 2008,] I felt like I was the only Oklahoman who was vegan,” Brogan said. “My coworkers laughed, my friends laughed, but I led by example.”

Over the last decade, Brogan watched as restaurants added vegan-friendly menu items and grocery stores carried more lifestyle-amiable products and she said that about 15 of her friends have followed her lead by embracing a vegan diet over the past decade.

“I believe in leading by example, not by preaching. There are enough vegans out there that will preach at you and tell you the awful things about what you’re doing,” Brogan said. “[My friends] made the change not because I preached at them, but because I lived and showed them what it could be like. It’s all about baby steps.”

The drop in dairy milk consumption shows that diet trends in the U.S. are embracing the benefits of veganism, even if it is limited for most. Brogan recommended embracing “meatless Monday” or planning meals to be vegan to get started and looking for non-dairy alternatives.

“Humans stop producing lactase at 18 months, so if you think about it, we’re all lactose intolerant,” she said. “It all counts; if you’re vegan or vegetarian for one day, it’s better than none. Any time you can eat vegan, you will feel better and it will be better for the environment and the animals.”

Brogan’s decade of veganism is highlighted with Oklahoma’s first VegFest, an extension of a national festival that has supported events in 30 states to celebrate and promote plant-based foods, animal rights and environmental sustainability.

The festival will be held 9 a.m. – 5 p.m. Sept. 8 on the Devon Lawn of Myriad Botanical Gardens, 301 W. Reno Ave. Entry is free, but the first 500 people in attendance to make a $5 donation will receive a gift bag filled with food items, coupons, product samples, free yoga classes and more.

“We’ve had a lot of fun putting this event together,” Brogan said, noting that the VegFest OKC Instagram account has more than 1,000 followers and they expect at least 2,000 people to attend the inaugural festival. “We are really happy about the outpouring of support. We had a volunteer meeting at Stone Sister Pizza and more than 70 people turned out. We expect it to grow next year.”

More than 42 vendors will be in attendance selling a variety of products including food, clothing and natural medicines. Underdog Rescue and Edmond Animal Services will hold live pet adoptions while Oliver and Friends Animal Sanctuary will have piglets on hand — not for adoption, but for playtime with the kids and social media pictures.

Completing the steps of a selfie scavenger hunt enters participants into a raffle for 18 items including free yoga classes, a week’s supply of vegan food delivery and a monthlong consultation with a health coach. 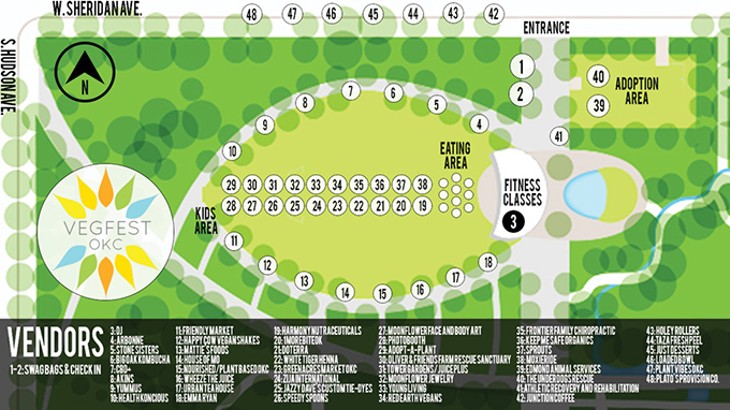 VegFest will include guest speakers and a pair of fitness classes. Shannon Stephens of Soul Yoga will lead a yoga class at 9 a.m. on the Myriad Garden stage and Audrey Price of Higher Ground Running will lead an exercise class at 11 a.m.

Jimmy Conway, a local orthopedic surgeon who founded the group Plant-based OKC, will showcase the health benefits of a vegan diet at 10 a.m. Local horticulturist and founder of the successful home gardening mobile app From Seed to Spoon Dale Spoonemore will speak at 12 p.m. Zak Shelton, who was a third-generation Texas cattle farmer, will detail his life story into becoming a vegan business consultant at 2 p.m. Dr. Amit Gumman of Harmony Healing Center will close out the event with a 4 p.m. discussion.

The festival’s organizing committee will begin efforts for next year’s festival while hoping more people reach out to groups like Plant-Based OKC, which hosts vegan dinners at Rococo every few weeks.

“When I was standing in Stone Sisters last week with 70 vegans, I was blown away at the difference 10 years has made in Oklahoma. There is definitely a vegan and vegetarian community in this town,” Brogan said.

“It is very supportive and the restaurants have caught on. You can go from the smallest family owned coffee shop to the nicest restaurant. The vegan lifestyle isn’t laughed at as much as it was 10 years ago. I still have some people that say, ‘What do you eat, grass and sticks?’ Then they see our food and say ‘I want some of that.’”