Plant in Midtown aims to provide an outlet for positive nutritional conversation and healthy meals.

The conversation around a vegan or plant-based diet is often about what a person cannot eat. With the opening of Plant, 1120 N. Walker Ave., in Midtown Aug. 5, owner Emma Ryan wants to talk about the positive effects of leaving behind animal products and processed foods.

Ryan herself is a testament to the health benefits of following a plant-based diet. In high school and college, she dealt with autoimmune diseases and was later diagnosed with thyroid cancer that spread throughout her neck.

She made the switch in her diet about nine years ago and within weeks felt a tangible difference.

“I felt light-years better just by changing my diet,” Ryan said. “That’s not to say I didn’t need Western medicine because I did; I still have surgery and other things. Doctors told me that there was no way I’d ever feel very good ever again or that I could recover 100 percent because I went through so much, but I feel better than I’ve ever been in my life. My doctor told me, ‘I don’t know how you have so much energy all the time because I’ve never met anyone who had everything like you’ve had feel as good as you.’”

She wanted to learn as much as possible about nutrition and why it was making such a difference in her life. First, she got a job as pastry chef at the raw vegan Mathew Kenney restaurant in Classen Curve. She then went abroad to help open a vegan restaurant in Amsterdam and returned to the U.S. to get a degree in nutrition. For the last two and a half years, Ryan has worked in Oklahoma City as a private health coach, creating meal plans for clients, among many other duties.

“It showed me that there are no healthy options when going out to eat,” Ryan said.  “You can manipulate menus, but there wasn’t anything readily available for my clients to go out to.”

For years, Ryan waited for someone else to open a plant-based restaurant focused on nutrition in Oklahoma City, but it never happened. While hosting a cooking class, she remembers people peppering her with the same question: When are you going to open a restaurant?

“It’s really meant to plant inspiration in people’s lives so that you can eat better to feel better.” — Emma Ryan tweet this

“People kept mentioning it, and finally, I put some menu ideas down on paper,” Ryan said. “One thing led to another, and I kept telling people about it and ended up getting investors. We found this location, and somehow here we are. It was a domino effect.”

Ryan originally auditioned and secured a spot in The Collective food hall, a process that she credits with pushing herself into action, but ultimately, she wanted Plant to be a comfortable space for people to spend time and ask nutrition questions.

The relaxed space in Plant is filled with comfortable pillows, hanging plants and informational literature.

The menu has stayed the same as what it would’ve been in The Collective, but the move to her own space allowed Ryan to add a coffee bar with beans from Sincerely Coffee Roasters and a grab-and-go section featuring items like overnight oats, chia pudding, salads, protein bars and ice cream made with coconut milk.

Plant is open 7 a.m.-8 p.m. Monday-Friday, 8 a.m.-8 p.m. Saturday and 8 a.m.-2 p.m. Sunday. The heart of the menu is built around all-day smoothies, a pair of fruit-based breakfast bowls and sourdough bread used for almond butter and jam or avocado toast. Brunch with breakfast hash, banana pancakes and mimosa service is served on weekends.

“We cannot keep it on the shelves,” Ryan said. “It’s the only bread we could serve and be passionate about. It’s hard to say bread is healthy, but we can vouch for this.”

Smoothies and salads are Ryan’s favorite foods. Plant opens with nine smoothie options made with housemade almond milk or coconut water that have ingredient bases, but every choice includes add-ins.

Soaking almonds and rinsing and blending them with vanilla and salt make almond milk. The mixture is strained through cheesecloth and produces a better taste and nutritional product than what can be found in most stores. 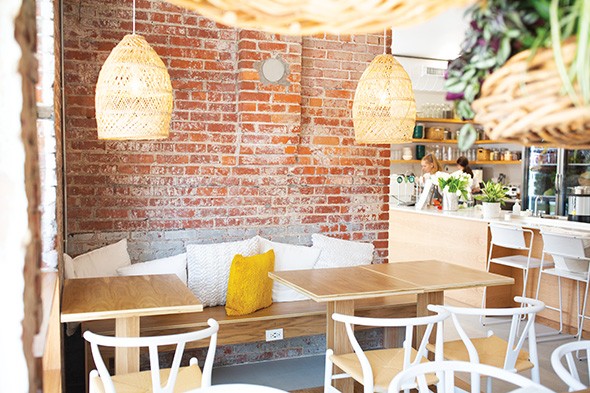 “We went through 100 pounds of almonds last week,” Ryan said. “I love that non-dairy milks are becoming so popular, but I tell people it’s their first step in taking chemicals out of their pantry, to buy almond milk that doesn’t have as many preservatives. There are brands that only have almonds and water in them, but they’re more expensive. You can make it at home for cheaper. If someone were to switch almond milk out for their salad dressing, it would take out 35 added chemicals or ingredients no one can pronounce, and they would probably start to feel a lot better. It’s little things like that that make a huge difference.”

Plant supplies an informational guide to explain the benefits for its products, many of which can’t be found in the rest of the city.

“We’re called Plant because we’re plant-based food, but it’s really meant to plant inspiration in people’s lives so that you can eat better to feel better,” Ryan said.

For instance, the Immortal smoothie contains almond milk; bananas; spinach; dates; chlorella, a chlorophyll and protein-rich algae that is a complete amino acid; cacao nibs, the unprocessed form of cocoa full of anti-oxidants and fiber; maca, a powder used to replenish adrenal glands and balance hormones; tocos, a natural source of Vitamin E; reishi, a mushroom powder that supports the immune system and stress relief; and ashwagandha, ayurvedic root powder that boots the immune system.

Ryan recommends people who are under the weather order the Immortal smoothie and The Healer tea, which is supplied from Urban Tea House and features fresh ginger, lemon and local honey.

Lunch and dinner are built around salads and bowls with quinoa and millet that will rotate with the seasons because Plant is using local produce. The Naked Summer Roll has been the most popular salad with local greens, cabbage, basil, cilantro, avocado, shaved almonds and almond-tamari dressing.

“Just the other day, a woman was hugging me and crying and just saying thanks for having this because she hadn’t been able to eat out, like go to dinner with her husband, in five years,” Ryan said. “Stuff like that makes everything worth it.”