Veteran duo Trout Fishing in America is reeling in the folk 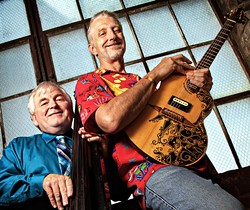 Squabbling musicians storming out on each other is a played-out trope that everyone knows by heart. But somehow, mismatched folk duo Ezra Idlet and Keith Grimwood has achieved the unthinkable — they’ve been doing their thing for almost 40 years, and a wise gambler would bet on Trout Fishing in America sticking around.

Idlet and Grimwood, at 6 feet 8 inches and 5 feet 5 inches, respectively, are as visually contrasting as their divergent backgrounds.

“One of the things that has given us the longevity that we’ve got is that we do come from different traditions. And we’ve been free to explore those traditions, and it’s added to both of our musical lives,” Idlet said.

A self-proclaimed folk tradition musician, Idlet doesn’t read music; he plays by heart. He walked out on his college basketball team at age 19 to play rock ’n’ roll in the U.S. Virgin Islands and never looked back. Meanwhile, Grimwood’s roots are steeped in classical music and jazz. At the University of Houston, Grimwood studied 15th-century counterpoint and he once had a chair in the Houston Symphony Orchestra. Idlet said Grimwood would go back to school today if he had the chance. Conversely, Idlet has never regretted trading chalkboards for surfboards. The pair was part of folk-rock band St. Elmo’s Fire until the group disbanded in 1979, and they’ve been playing together as Trout Fishing in America since 1977.

“Touring is a constant thing for us,” Idlet said.

Based in Arkansas, the band makes short treks to play a string of gigs over a few days and then heads back home before setting out again.

“It’s been a good way to stay in touch with our families. We both have kids, and we’ve been married for a long time to our wives,” Idlet said. “It’s a great way to run a musical life.”

On tour, they’ll often do a kids’ show earlier in the day and then a show for the parents at night. Trout Fishing in America released two children’s books with accompanying CDs — My Name is Chicken Joe and Chicken Joe Forgets Something Important — in 2009 and 2011.

Their upcoming show at The Blue Door will be targeted at an adult audience, but much of their music radiates a lighthearted flare and comic smirk.

“You need to be entertaining ... you need to write songs that make people interested to come out and hear you — make them laugh, make them feel. I think that’s something we excel at, the natural humor,” Idlet said. “I don’t take what we do lightly, but it’s hard to stay serious for too long. I enjoy what I do. We both do.”