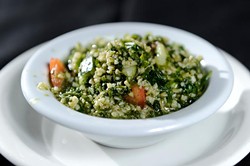 Lebanon was a protectorate of France from the 1920s to the 1940s, but centuries before that, Lebanon and cities like Beirut were already a mélange of cultural and culinary sophistication.

The first wave of Lebanese immigration into Oklahoma City began before World War I, when many arrived from Jdeidet, Marjeyoun, Lebanon.

“It’s interesting. I would say that about 80 percent of the Oklahoma City Lebanese community have origins from the same village,” said Clayton Farhood, manager of Nunu’s Mediterranean Cafe & Market, 3131- B W. Memorial Road.

“My grandfather left Lebanon during World War II. He came to America by boat, and the family was initially located in Tulsa, then much later in Oklahoma City,” said Greg Gawey, owner of Jamil’s Steakhouse, 4910 N. Lincoln Blvd.

“In the early years, men were primarily the ones who learned English, mainly to secure jobs. Women stayed home to care for children. As children entered school, they learned English,” said Deacon Ezra Ham of St. Elijah Antiochian Orthodox Church, 15000 N. May Ave., home to a large Lebanese-based congregation. “Quite a few of the families began work by opening up dry goods and grocery stores.”

To this day, Lebanese cuisine is found easily across Oklahoma City.

One trademark of Lebanese food and culture is hospitality, and it shows at Jamil’s Steakhouse. As soon as customers are seated, they are brought an array of appetizers: stuffed cabbage rolls, tabbouleh salad, hummus, a relish tray, smoked bologna and crackers.

Insider’s note: In the 1950s, the restaurant’s large, homey location was a known, popular speakeasy. 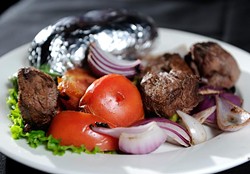 “One of our signature drinks, our lemonade, contains a splash of orange blossom water. It was my grandmother’s recipe,” said Farhood.

Couscous, olive oils and vinegars, candies, tahini, herbs, spices, beans and more are available from a small specialty market in the back of Nunu’s. Its deli counter features stuffed cabbage leaves, kibbeh (an appetizer of ground lamb, bulger wheat and seasonings) and baklava to-go.

The recipes at Nunu’s were handed down through generations.

“My mother learned these recipes from my grandmother, who was born in Palestine,” Farhood said. “My grandmother didn’t learn how to cook until she arrived here in the U.S. She then taught herself from scratch, drawing upon memories from her childhood in Palestine. She taught my mother, Nunu.”

“Most of the recipes used here have origins well over 100 years old,” Farhood said.

Directions 1. Grind with a mortar and pestle and store in an airtight container. 2. Serve sprinkled on pita bread with a swirl of olive oil as a light appetizer.