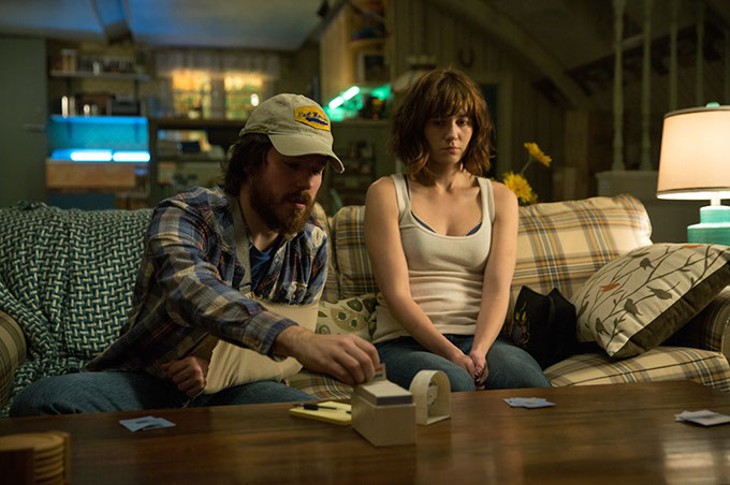 I’m not entirely sure what to write about a movie that I wish you didn’t even know the title of. That isn’t to say you shouldn’t see 10 Cloverfield Lane. See it. It’s a phenomenal movie, the kind that makes you hold your mouth agape on your first viewing and then inspires you to evangelize by showing it to everyone you know.

Subsequent viewings, of which there will be many, will be spent watching friends react to the movie, experiencing the secondhand near-smug joy of solving a puzzle you’ve already finished. But you won’t be able to watch their faces for long before you’re wrapped up in tension again.

Knowing the twists and turns only deepens the experience because they’re never cheap, but they’re rational enough that they prompt post-viewing discussions and the kind of retracing of steps that happens when one loses their keys. I know that’s vague, but the less specific I can be, the better. Then again, nobody walked into Psycho thinking they were going to get a lighthearted musical, so maybe it’s OK to give some broad strokes.

The directorial debut of Dan Trachtenberg, a guy known for sci-fi video game fan films and commercials, 10 Cloverfield Lane is a pinnacle thriller. With a script by Josh Campbell and Matthew Stuecken, with intense Whiplash writer/director Damien Chazelle adding what one can only assume was a hefty amount of tension, the movie is tight and fast and will break viewers’ necks if they’re not careful.

A little over an hour and a half flies by on the shoulders of Mary Elizabeth Winstead, who gives a performance rivaling Sigourney Weaver’s Ellen Ripley. She solidifies herself as one of the most malleable, tough, subtle actresses working today. She’s joined by John Goodman (giving an Oscar-worthy performance, if these kinds of movies won Oscars) and John Gallagher Jr., whose easy, stumbling delivery makes every line endearing.

Michelle (Winstead) has a fight with her boyfriend, who we never see, before the film begins.

She packs up, moves out of their shared apartment and drives to the most relatable destination: away. But before she gets there, she gets sidetracked and spends most of the movie with Howard (Goodman) and Emmett (Gallagher). Any more details and I’d take away from what 10 Cloverfield Lane has to offer.

Excellently shot, with cramped meaning squeezed into every frame, it plays with viewers like only a good film can. Emotional states and feelings toward the characters fluctuate expertly, with comic relief so perfectly timed and paced that if someone said it was a joint directorial effort by a statistician and a psychologist, I would believe you.

So often, movies spend their runtimes trying to get their points across, to make you believe things about characters or to just buy the plots. 10 Cloverfield Lane has viewers and knows it has them. It has them chained up and won’t let go. They will develop Stockholm syndrome.

Print headline: Scripted Stockholm, 10 Cloverfield Lane is an attention-grabber that holds viewers hostage and takes them on a wild ride.