The celebration of April’s Record Store Day has mirrored the resurgence of the vinyl record sales over the last decade.

As vinyl now accounts for more than a third of all physical music sales, its highest percentage since 1988 according to information from Recording Industry Association of America (RIAA), April 13th’s Record Store Day is slated to be its biggest since its 2007 inception, with more than 500 special releases.

Streaming and digital music sales make up the bulk of the music industry’s $9.8 billion in retail value, with $7.4 billion of that figure coming from streaming services like Apple Music and Spotify’s premium tier. But vinyl, once left for dead in the early 2000s, has made a dramatic comeback.

In celebration of Record Store Day (RSD), metro area record stores are participating by entertaining lines of guests and selling RSD’s special releases, while another — Trolley Stop Record Shop — is hosting a party with live music and food.

Many of RSD’s special releases are issued in limited quantities — many less than 3,000 total copies across the country — so getting the most-wanted titles can be competitive. Guestroom Records owner Justin Sowers said people routinely camp out overnight at the Norman location.

“The earliest anyone has shown up is at 8:30 on Friday morning [the day before RSD],” Sowers said. “It’s pretty competitive for the first 15-20 positions, but then after that, you can show up during daylight hours.”

Guestroom opens an hour early, at 10 a.m., and lets five people in at a time for two-minute intervals, “so that it’s not a stampede,” Sowers said.

As the number of RSD releases has grown over the years, Sowers said that Guestroom tries to be more selective in what it orders by listening to customers to gauge what they should get extra copies of. In the early years, Sowers said Guestroom would at least try to order one of every release, but it has chosen to be more selective on smaller releases.

“We didn’t order everything, but most things,” Sowers said.

“I’m personally excited about the Skip Spence three-LP release (AndOarAgain),” Sowers said. “I don’t know how many other people will pay $80 for it, but if I only buy one thing, it’s going to be that. I’m a huge fan and he only put out one record, so three LPs worth of material is a gift.”

Sowers said Guestroom will release 1,000 fresh used records and have a storewide sale and is looking forward to a regular RSD after last year’s festivities that included a collaboration with Dogfish Head Brewery and The Flaming Lips, which released a 7-inch inspired by the brewery’s pale ale, and the re-issue of Oklahoma soul band Messengers Incorporated on Guestroom’s record label.

“The chaos was barely controlled,” Sowers said of last year’s festivities that included appearances by Lips members Wayne Coyne and Steven Drozd and surviving members of Messengers Incorporated. “This year, we said, ‘Let’s not worry too much about the craziness and just worry about having the best records out there.’”

Owner Jack Ware opened his record store in an Edmond shopping center four and a half years ago, and Ware said his business has increased every year.

“As my business has increased over the years, I’ve become more familiar with artists I didn’t know much about,” Ware said. “It’s a constant re-evaluation of what I have or what I can sell. Every day, I’m asked about a group I’ve never heard of before. There are thousands of them out there.”

For RSD, 3 Dachshunds will have plenty of special releases, many ordered after talking to customers. The store will offer 10 percent off used vinyl, 25 percent on 45s and 30 percent on country records.

“It’s always our best day of the year,” Ware said of RSD. “It’s like a second Christmas because when people come in to buy Record Store Day releases, they always buy other new items as well as vintage.”

Ware said he usually gets a line of customers that goes at least 12 to 15 deep.

“I don’t care if I have 100 people outside; when I open the door, it’s open for everyone,” Ware said. 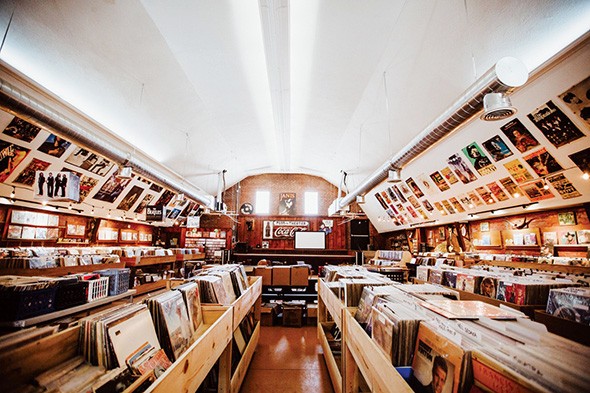 While Trolley Stop doesn’t order RSD special releases, it will honor the day by hosting live music and food at its location in the old Penn Theater.

“We just make it a party, which is what it is,” owner John Dunning said. “It’s Record Store Day for record stores. We get those special releases on trade, and we do have [previous year’s RSD releases]. We’ve got plenty.”

Trolley Stop will open 10 a.m. Saturday and have music on its stage by 11 a.m. Dunning said that drummer John Barbata of The Turtles; Crosby, Stills, Nash & Young; and Jefferson Airplane / Starship will be at the store to sign copies of his memoir.

Trolley Stop has recently expanded its space to allow for music bins to be rolled into the auxiliary space and provide for larger live music performances in the future. Oklahoma City’s Black Powder Charlies and Omaha-based Pole Cat are among the performers during RSD.