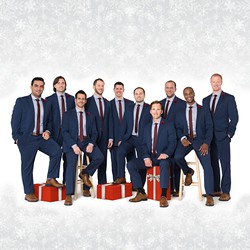 Just to stir up some memories among his former a cappella mates, Randy Stine uploaded a 1998 video of the group performing “The 12 Days of Christmas.” The Straight No Chaser version took a classic vocal arrangement from the 1950s and incorporated “I Have a Little Dreidel” and topped it off with cheese — Toto’s “Africa.” The result became one of the first major viral successes on then-fledgling YouTube and took all the members by surprise.

“By the end of that first month, it was up over 7 million views,” said Walter Chase, who was working as a financial advisor for Deloitte in Manhattan. “A lot of us were talking about what would come from this.”

Thousands of a cappella groups exist on American college campuses, but Straight No Chaser’s original 1996-’99 collegiate run achieved unusual heights. The group performed the national anthem at Wrigley Field and Comiskey Park in Chicago and eventually made it to Carnegie Hall in New York City. Many of the members, including Chase, hoped to eventually return to music. When “The 12 Days of Christmas” took off, they had to make some decisions.

Craig Kallman, Atlantic Records CEO, called Stine to see if the group would reunite to record a new album. Members convened in 2008 to record Holiday Spirits in Bloomington, Indiana. As the holidays approached, Straight No Chaser racked up performances on programs like NBC’s Today, propelling Holiday Spirits to No. 1 on iTunes.

Straight No Chaser signed a “360 deal” with Atlantic, which gives the company a percentage of recording sales as well as touring and merchandising revenues. The members realized they had to decide whether to quit their day jobs in order to devote more time and effort to the group.

“It was a huge risk for all of us,” Chase said. “Some of the original guys actually decided to stick with their professional jobs.”

Since Holiday Spirits, Straight No Chaser has released four studio albums and is preparing to release its sixth collection, I’ll Have Another … Christmas Album. It is the group’s third holiday album since reuniting, and the Christmas season is a prime activity period for the singing act. Chase said that because of the demand, October is the beginning of Straight No Chaser’s holiday tour, so fans who see the group perform 7:30 p.m. Oct. 27 at Civic Center Music Hall, 201 N. Walker Ave., should prepare for much jingling all the way.

While there has been more turnover in the group, its membership still comes from the alma mater. For years, both the commercial group and the University of Indiana group used the name Straight No Chaser, but starting in 2012, the college group changed its name to Another Round. Chase said that while a cappella groups continue to proliferate, Straight No Chaser has a secret ingredient.

“The things that make us stand out, though, are our arrangements,” he said. “We take songs people like and arrange them with what we call the ‘Straight No Chaser twist,’ adding just a little bit of personality to the song that fits us and fits our audience. … It’s not easy to dissect. If it was, there’d be a lot more Straight No Chasers out there.”