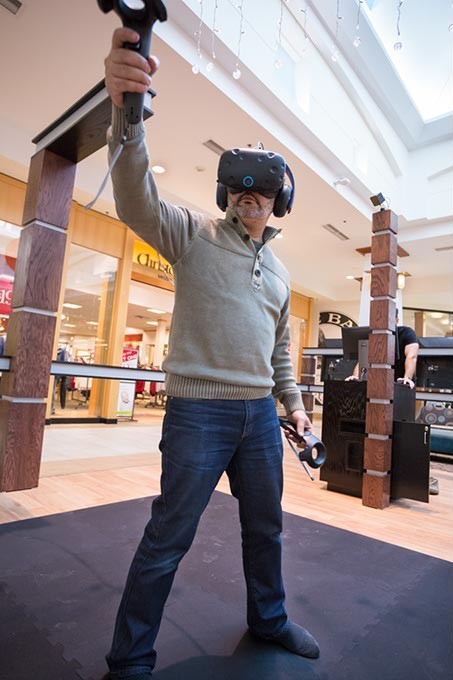 The future is here, and it’s located inside Norman’s Sooner Mall.

Immersion House, a virtual reality (VR) platform experience, provides a much-needed escape from the hustle and bustle of the holiday crush. It might just be the perfect outlet for channeling your leftover Black Friday rage or escaping day-to-day struggles for a precious few minutes.

The virtual reality experience is made up of four bays. Two are small, 7-by-7-foot rooms used as stand-up spaces. The virtual reality visor’s space is mapped to the actual dimensions of the rooms. There are also two seated bays that house immersion chairs, which simulate the movement of the games. Unlike home virtual reality setups, your feet won’t get tangled in cords at Immersion House; special towers suspend the cabling above players’ heads.

“You don’t have to be a gamer to enjoy Immersion House. It’s fun. You use your body to control the game,” Battles said. “You hold two controllers, which have four buttons on them. Depending on the game you are playing, in VR, you may be holding a paintbrush or you may be holding a gun.”

When your avatar needs to go to a different location within the game, you teleport by holding down a button and jumping from one 7-foot section of the game to another.

Sessions are about 15 minutes long and cost $10 for stand-up games and $12 for immersion chair games. One chair session ends up being three or four laps in the racing game. Customers can race one another or, in the case of the stand-up games, team up against the terrible drones. Microphones in the headsets allow for player-to-player communication. Large TV screens are mounted on the outside walls of the platform so people waiting in line or just passing by can see what the players are seeing in real time.

Tarek Dina, who also owns Levant Technologies, expects the business to expand sooner rather than later.

“We can also fully recreate the Immersion House experience in a player’s home,” Dina said. “We can build them a full setup for a stand-up bay. That includes the HTC headset, controllers, computers and monitors. The cost for a home version is about $4,000.”

Games available immediately include Raw Data, a first-person shooter game in which the player must kill mechanical foes.

“AI has become evil, and robots and drones come at you,” Battles said. “It’s an active game. Players duck, jump, hide and reload your pistol.”

“Raw Data is probably best for players 16 and up. There is a little profanity, and it can get really intense, with robots and drones shooting at you,” Battles said. “Anyone younger than 18 needs a parent’s signature to play or become a member. Space Pirate Trainer is still fun, but it’s more like shooting skeet. You aren’t being attacked as much.”

The sit-down games available now at Immersion House are Project Cars and Dirt Rally. Project Cars is one of the most technically advanced VR racing games on the market.

“The immersion is so complete that players actually experience a state of flow, meaning that they are fully present in the moment in the game,” Battles said.

Immersion House is open during regular mall hours. Visit soonermall.com. Players sign in at the desk and are entered into a queue. Text message notifications are sent when it’s your turn. 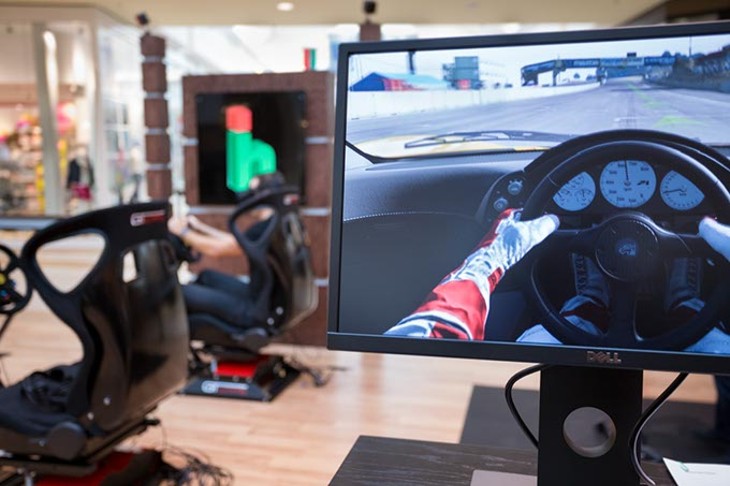