A Gazette reporter battles his ego inside iFly’s wind tunnel to sample a virtual reality fight. 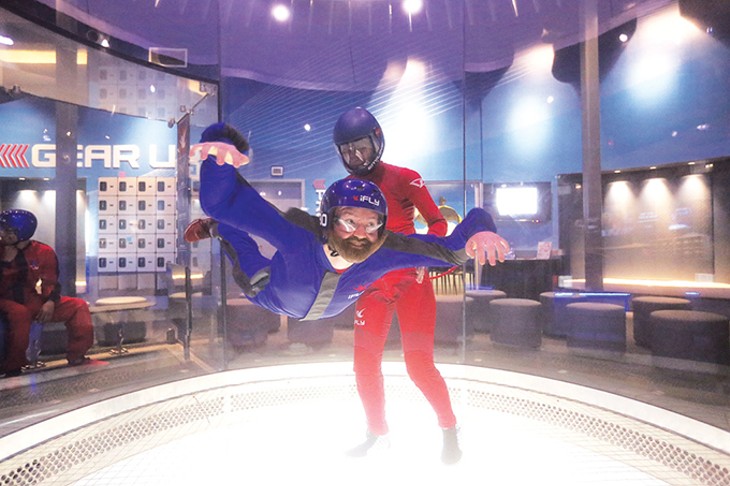 “Where would you like to dive?” asked the instructor behind the counter at iFly Oklahoma City Indoor Skydiving. Waiting for my response, she fiddled with the dark helmet and video screen that would eventually make my virtual-reality-enhanced free fall possible.

I wasn’t sure what my options were for a virtual skydive location, but I am a man who knows his favorite terrain.

“Somewhere cold,” I told her, “preferably with mountains and snow.”

“Ah, the Swiss Alps,” she said, configuring something on the visorless black mask. “That’s my favorite place to dive.”

She placed the helmet over my head, and I adjusted it to fit my vision needs. When the device was primed, she lifted it from my head and asked me to step into the instructional room with the rest of my diving companions: two young strangers whose date I was almost certainly crashing.

Nonetheless, I walked away from the counter full of life. Minutes earlier, I had been at Oklahoma Gazette headquarters, sitting quietly at my desk, typing away at another story to populate your favorite fiercely local and independent newsweekly. And now I was at iFly, 13600 Pawnee Drive, preparing for the closest possible thing one can get to skydiving without actually boarding an airplane.

I have never been skydiving before, real or simulated. I wondered to myself, “Should I be terrified? Am I about to lose my lunch?”

Truthfully, I was not worried. The fear in skydiving comes from its inherent — or at least perceived — risk of splatting on the ground. Inside iFly’s vertical wind tunnel, divers are not technically even falling, but are pushed up by the force of an extremely powerful fan below. Any rookie flyer managing to “fall” a couple of feet to the bottom will be caught by a tightly strung safety net with virtually no threat of serious injury.

Waiting in the training room, I silently laughed at the thought of someone sinking to the bottom of the air tube. I felt like Tom Cruise as Ethan Hunt in Mission: Impossible or Tom Cruise as Maverick in Top Gun or Tom Cruise as whatever his name is in Days of Thunder. I was beyond confident. I was cocky, sure of victory. The Alps, in all their ancient majesty, were now simply my playground. Epic wars have been fought over the beauty of these peaks and valleys, and there I was, about to swoop upon the gorgeous slopes, proclaim my dominance and duck out—having sufficiently feasted on their splendor and drunk on glory—within a tight 30-second span.

All of a sudden, the instructor entered the room. She mentioned something about an instructional video, which had apparently been playing while I daydreamed of my Cruise-esque HALO (high altitude low opening) jump. I was not worried because there was no way their film was more entertaining than the one I was playing in my mind. Our instructor rhetorically quizzed us on proper posture and the meaning behind several “vital” hand gestures she would use to communicate with us in the roaring air tunnel. I gave her my vague interest and nodded for her assurance, wondering how any of the tips could be more helpful than that classic bit of advice from history’s greatest film, Toy Story.

“This isn’t flying; this is falling,” Buzz Lightyear says, “with style.”

At least that was how I imagined it would be.

However, as soon as I stepped up to the air tunnel, it was clear that, just like any good Cruise movie, my arrogance would be the cause of my downfall.

The flight session I was signed up for included two non-VR flights and one final flight in our selected virtual location. During the first flight, the instructor was very hands-on and played a large role in guiding me as I fought for stability in my mid-air hover. I could tell my posture was not quite right — and the instructor told me as much after the first round of flights — but my earlier inattention combined with a general lack of coordination and bodily awareness made it challenging to correct myself.

The instructor gave me a little more freedom the second time around, and I was not able to capitalize. There were a flurry of hand signals from a variety of employees, but my mind was too frazzled to respond to them. Eventually, I got flipped over in the wind and landed softy on the net below. Naturally, I tensed up and was not able to get back in the air. They turned off the fan, and I walked out of the tube instead of gliding up to the exit like you’re supposed to do.

I had imagined starring in a blockbuster action movie, but I felt like I was in the blooper reel of a Space Force recruitment commercial.

After the second flight, it was time to strap on the VR helmets and take a simulated dive over The Alps. The helmet completely blocked my outer vision, meaning no guidance from any instructor could help me. I was on my own, and given my results from the last dive, I did not have high hopes for improvement.

They flicked on the VR footage before my dive, and that part of the experience was everything I imagined. Shot on location with GoPro cameras, I was transported into a crystal-clear, 360-degree world far away from my reality. Though the VR did boost my overall experience, my brain was never tricked into thinking I was really free-falling through European skies. That was particularly true after I inevitably tipped over and fell to the net yet again, unharmed save for my ego.

It should be noted that the other two people I flew with, Hugo and Haley, were able to maintain their aerial balance in every flight. Apparently it pays to listen to directions? Go figure.

Our instructor was polite to me after the session was over, even though I was likely at least tied for first place in the race for worst flight student ever. She told me something about how I could improve my results the next time out, but again, I had no listening skills.

When we were back on solid ground, I approached Hugo and Haley in part to ask about their experience, but in part to check if they thought I was some kind of fool.

“Do you all have any tips?” I asked after we talked for a bit. “Maybe you could tell I wasn’t very good.”

“I don’t know,” Hugo answered. “I don’t think I was very good either.”

Hugo had spent his VR flight hovering over Dubai. Haley, who was by far the best flier in the group, had chosen Hawaii.

“It was cool,” Hugo said. “I’ve always wanted to go to Dubai, but this is the closest thing I’ll probably get.”

This was Hugo and Haley’s first time at iFly. Hugo read about the VR flights online and convinced Haley to try them out with him. Curiously, Hugo said he has a longstanding fear of heights and would never have imagined skydiving before this experience.

Haley, on the other hand, said that skydiving has been on her bucket list for several years. Hugo said he was nervous going into the day but would now at least entertain the idea of jumping out of a plane for fun.

“I think if you were actually flying, it’d be different,” Haley reminded him.

Haley is right. Everyone is brave until they’re staring down at the hard Earth from 13,000 feet. Falling — with or without style — is often the easiest choice we can make. It takes no effort to fall, but you’ll never fly without trying.