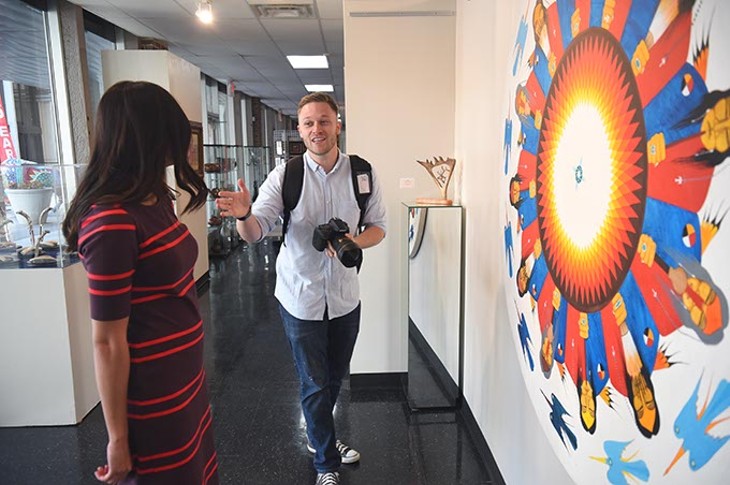 The Oklahoma City Convention & Visitors Bureau (CVB) uses promotional videos to showcase the city as a travel destination for tourists and out-of-town guests.

In the past, an outside firm took months to shoot and edit the film. By then, OKC had evolved — streetscapes, buildings and attractions changed in popular target areas. After such an investment of time and money, scrapping the video was unthinkable.

"It is great to look at pretty pictures in a printed guide, but wouldn't it be neat to see a video about the Boathouse District?" said Carrier. "In that video, you would find out that you can learn how to paddle a kayak there and the guides teaching you are Olympic athletes. Where else can you experience that?"

Multimedia Content Manager Caleb Everett joined the CVB staff about two months ago. He began working with local ad agency Ackerman McQueen, 1601 Northwest Expressway, to create a series of short-form videos that take viewers on a 30-120-second journey through OKC locations. The spirited videos communicate the energy of the particular district or activity.

"We don't want them watching a slideshow,” said Everett, whose goal is to produce informative and entertaining videos. “We want it interactive and to make [the viewer] want to share it."

Text appears only in the introduction and the ending of the district videos, to serve non-English speakers. Local music replaces stock soundtracks and is often provided by artists attending the Academy of Contemporary Music at the University of Central Oklahoma (ACM@UCO).

All videos are worth sharing on social media for giving non-OKC friends and family a feel for the area, said Seth Spillman, CVB's director of marketing and communications, who said the social media hashtag #SeeOKC is for locals as well as tourists.

The videos are meeting their first goal: People are tuning in. The two-minute overview video has garnered nearly 60,000 views on CVB's Facebook page.

"There is a lot to see in Oklahoma City," said Carrier, "and the ability to use videos puts us in a great place."