“The idea was to not throw any idea away, to follow any thought to its end,” said Standridge, referring to duo’s songs. 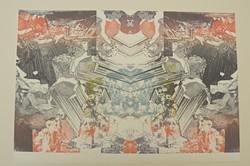 If the name Big Dumb Buildings does not ring familiar, you’re not alone. There is a simple reason for the lack of recognition: The band is a recent creation. It does have an extensive backstory, but it’s fake. The tales to be spun by musicians like Mike Hosty and Jeff Richardson are nothing but mythology.

The brains behind Big Dumb Buildings, Gregg Standridge and Brian Eads, have been part of the Oklahoma music scene since the mid-1980s. They said the project began in 2013 with a notion.

“The idea was to not throw any idea away, to follow any thought to its end,” said Standridge, referring to duo’s songs.

The mission led to multiple weird, funny tracks like “The Secret Life of Candy Bars” with subjects such as outhouses and igloos. There is a serious side of Big Dumb Buildings — French film auteurs are among the meaningful addressed subjects.

Standridge and Eads refer to Frank Zappa and They Might Be Giants as influences on the band. Both artists are known for their tongue-in-cheek song subjects and lyrics. Standridge said the unusual comedy of the Dr. Demento radio show has help shaped some of his work.

As the project began to take wheels, Standridge and Eads recorded the experimental songs in Eads’ home studio. They invited other Oklahoma musicians to play on their debut album, Concrete Cages. Danielle Tipton of SK Love, Kevin Webb and members of Helen Kelter Skelter all appear on the album.

The duo felt Big Dumb Buildings could be a vehicle into uncharted artistic territory. They developed the idea of a band with fictitious history and influence to be honored by other artists.

They took their project to Norman Arts Council and were stunned by the response.

“We were both surprised,” Standridge said. “We didn’t know if that gallery would take us up on that.”

“We said, ‘You guys can do what you want with it,’” said Standridge of the instructions given to the artists.

Performers will add to the band’s mythology between songs, telling stories, both negative and positive, about their memories and dealings with Big Dumb Buildings. In another humorous twist, Standridge and Eads will not perform at their album debut event and will allow others to define the band.

Free copies of Concrete Cages will be given to attendees. Guests also can get a free Big Dumb Buildings logo screen-printed onto an item.

“Anyone can bring a shirt, tote bag or towel — as long as it prints,” Standridge said.

T-shirts and tote bags will be on sale for $5 for those who don’t bring items with them.

Though the process of creating Big Dumb Buildings has been entertaining, Standridge also described it as challenging.

“Making yourself step out on a limb every time and having faith to see your ideas through has been the hardest part,” he said.

He expects the event to be as amusing as it was to create.

“It’s been an absolute blast working with these guys,” he said. “It’s going to be a great time.”

Print Headline: Legendary lore, Local musicians from a fictional band watch as others pay tribute to them at a mixed media event at Mainsite Contemporary Art.