Clara Luper blazed trails with a nonviolent sit-in movement, but 60 years later, there is still progress to be made. 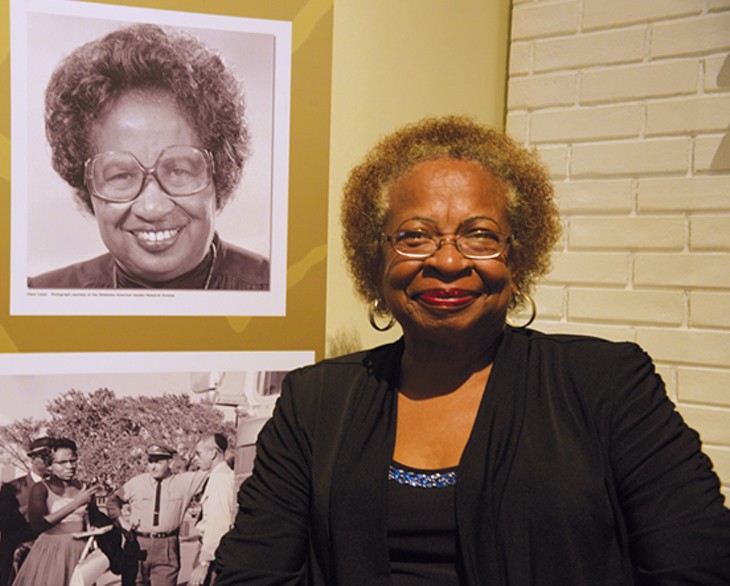 The Oklahoma City sit-in movement of the late 1950s and ’60s is known for staying nonviolent as it pressed toward its civil rights goals. But while local protests never escalated into the chaotic scenes of fire hoses and billy clubs as immortalized in stark black-and-white footage from Selma, Alabama, and Watts, California, it would be inaccurate to call the environment around the movement totally peaceful.

“Of all the people in the city — I’m out there picketing with everybody, and he throws the monkey on me,” said Marilyn Luper Hildreth, recalling a white anti-protester lobbing a chimpanzee onto her shoulders during a local rally. “I’d never had a monkey thrown on me before.”

Hildreth is the daughter of late Oklahoma-born civil rights leader Clara Luper, who is regarded as a hero for organizing sit-ins and other protests as advisor of the National Association for the Advancement of Colored People (NAACP) Youth Council. Luper led the first sit-in at the former Katz Drug Store in downtown OKC. Participants sat for hours inside the store days at a time, despite hostility from some customers. Katz ended its segregation policy after only a few days of the sit-ins.

That first sit-in was just the first of several protests OKC’s NAACP Youth Council would lead through the years.

The group’s strategy of civil disobedience — even in the face of public anger — was effective at producing results. But the bravery shown by the Youth Council members is amplified when one considers the age of its members. Hildreth was just 11 or 12 when the monkey was thrown on her. Nearly every member of the Youth Council was younger than 19. Tommy “Big Bud” Barnett, a member of the Minute Men Commando group that acted as security for the Youth Council sit-ins and protest, was just a teenager when he rushed to assist his frightened colleague. 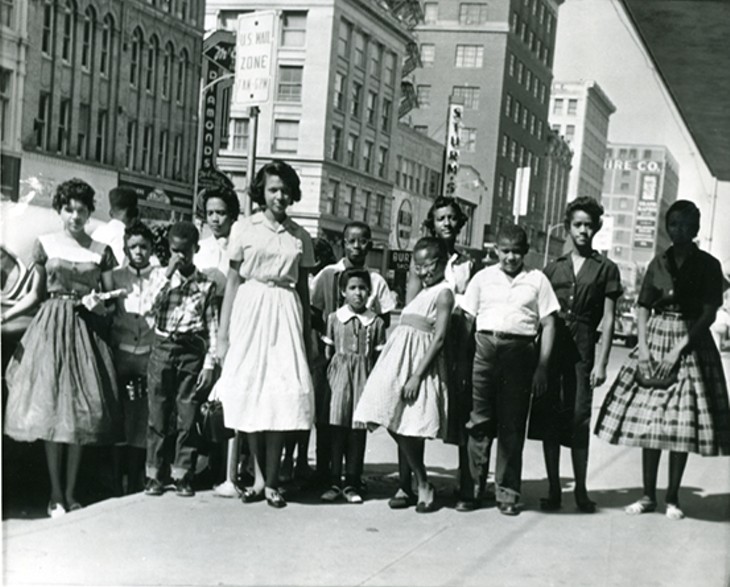 Larry Jeffries — a former Youth Council and Minute Men Commando member — sits on a gray couch, examining a rough draft of the programming schedule for the sit-in movement’s 60th anniversary celebration. He lays it on the coffee table and makes comments to the rest of the planning committee. The walls are plain white, ornamented with metal-frame butterflies.

It is an ordinary-looking living room, except for the fact that it is not a living room at all. Quick glances to the left and right reveal that the unenclosed space is actually part of a Clara Luper-themed display within Oklahoma History Center, 800 Nazih Zuhdi Drive. Two intersecting white walls help recreate Luper’s own living room where the civil rights leader organized countless sit-ins and protests through the years.

It is between these familiar walls that the committee finalizes plans for yet another sit-in, this one a historical reenactment.

A procession will gather 9 a.m. Aug. 18 at the downtown Frontline Church, 1104 N. Robinson Ave., and march about a third of a mile west to Kaiser’s Grateful Bean Cafe, 1039 N. Walker Ave., and stage a sit-in inside the eatery, which features vintage bar seating similar to that found inside Katz Drug Store.

There will be additional events, lectures and film screenings held throughout the week. Visit okhistory.org for more programming information.

"She [Luper] was such an amazing orator. I wanted to be able to have just a portion of her fire and her passion and the power." —T. Sheri Dickerson tweet this

Luper’s trailblazing work in civil rights, and Oklahoma’s sit-in movement in general, are often overlooked by history in favor of the more violent protests that came later. Even in this state, the role Luper played in history is not always clear.

“If anybody is under 50 years old, they may not know who Clara Luper is. Under 40 years old, probably not,” said Bruce Fisher, a retired historian and son of University Oklahoma’s first black law school student, Ada Lois Sipuel Fisher. “So now that we’ve got it here, the next thing to do is to educate the community on how to utilize it.”

Aside from serving as advisor for the NAACP Youth Council, Luper was a teacher at the black-only Dunjee High School in east Oklahoma City. She also wrote several plays, including Brother President, which taught Martin Luther King Jr.’s nonviolent protest philosophy. Luper and her students were invited to perform Brother President at NAACP’s 1958 national convention in New York City. Up north was the first time many of the students were exposed to bathrooms, drinking fountains and restaurants that were not segregated.

Returning home to race division at nearly every corner after a brief taste of freedom was not acceptable to the students. Shortly after the trip, the Youth Council voted to begin their own campaign of nonviolence in OKC.

Hildreth said her mother was much more than an NAACP advisor or a high-school teacher. She was a ’round-the-clock mentor to the community’s youth and insisted upon the children presenting themselves in a proper and educated manner at all times.

“You can tell all the students that she affected and that she taught,” Marilyn said, “because they don’t say, ‘Uh, uh, uh.’”

Though Luper is now seen as a hero and role model, former sit-in participant Joyce Henderson was too busy living in the moment to have the presence of mind to see her teacher as a legend in her lifetime. They all had work to do, after all.

“We knew one thing: There was something wrong with that picture where you could not go to recreational parks like everyone else, you could not drink out of the same water fountain, you couldn’t go to the same restroom,” Henderson said. “Everything that dealt with us, we were excluded instead of being included.”

It is no happy accident that the OKC sit-ins were kept nonviolent. Luper maintained a close relationship with the Oklahoma City Police Department and made peaceful conduct a tenant for her Youth Council protesters. Students involved in the sit-ins went through special nonviolence training. Adult advisors tested students to make sure they could keep their cool.

“They would all of the sudden just surprise you and throw some water on you,” Jeffries said.

“It was like a war,” Hildreth added. “We were getting ready for combat.”

Youth Council protesters endured all kinds of verbal abuse from those opposed to their movement. Sometimes building managers would lock them inside the buildings they were occupying and shut off the air conditioning for hours at a time. Some students were spat on; others had hot coffee thrown at them.

“You knew they were going to step on your hands when you’re on the sidewalk sitting down,” said musician Jahruba Lambeth, a member of the sit-in movement who was also part of the Minute Men Commandos with Jeffries.

Luper tasked the Commandos with showing up at a protest site before anyone else and leaving only after they were sure everyone else had left safely. They also stood watch around the perimeter of the protest location.

“Anytime we were out on the picket lines, there was always a threat of something happening,” Jeffries said. “We were the vanguard, even though we were just teenagers.”

“When we sat down here, it made the other black people across the country stand up,” she said.

OKC’s sit-in movement lasted between five and six years. Some consider the end of national civil rights movements to be with President Lyndon B. Johnson’s signing of the Civil Rights Act of 1964. But Jeffries is quick to remind people that the fight against hatred and for equality is never really over.

"We knew one thing: There was something wrong with that picture." —Joyce Henderson tweet this

On his song “Come Up,” rapper Jabee connects Luper’s legacy with the recent #BlackLivesMatter movement.

“Hey trooper, I’m Clara Luper / sit in and I demonstrate / my will is healing a million / civilized each civilian / because these black lives matter no matter who did the killing” raps the emcee, born Jabee Williams.

“Come Up” is featured on Jabee’s 2016 album Black Future, a project that name-checks dozens of local and national civil rights leaders. Like the majority of Oklahomans, Jabee never learned about Luper or the local sit-in movement in school. His knowledge of these things stemmed from growing up around engaged African-American parents and family members.

“Today, there is an awareness because of what’s happening,” Jabee told Oklahoma Gazette, “but I think the importance and the value in what these people [in the sit-in movement] have done so that we can sit here today isn’t as sacred or as honored as it should be.”

Luper’s involvement with youth through the NAACP Youth Council is obviously closely tied to the sit-in movement of the ’50s and ’60s, but she continued her involvement as an advisor for years afterward. One of the students she mentored in that time was T. Sheri Dickerson, co-founder of Black Lives Matter Oklahoma. Dickerson was involved in the Youth Council from the late ’70s to her mid-teens in the late ’80s.

Dickerson said the sit-in movement was very much at the forefront of her mind as she organized protests with Black Lives Matter. She particularly strove to channel Luper in her public speaking engagements.

“She was such an amazing orator,” Dickerson said. “I wanted to be able to have just a portion of her fire and her passion and the power. The way I think I was able to accomplish that was by doing what she taught me, and that was to be authentic.”

Though the specific aim of their social justice movements differ, Dickerson said it is important for young people to know the history of their activism.

“The fight for racial justice has evolved,” she said. “I think the civil rights movement was focused on, at that point, what they called equality. And now this movement is more focused on racial justice in the sense of equity. But you don’t accomplish one without the other.” 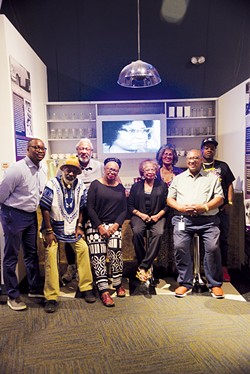 Last year, Jeffries embarked on a pilgrimage of sorts to Washington, D.C. He walked up the steps of the Lincoln Memorial and stood over the “X” marking the exact spot King stood as he delivered what is now known as the “I Have a Dream” speech calling for an end to racism.

Jeffries peered out on the National Mall, imagining the swarms of people converged on the spot following the famous March on Washington in 1963.

Through their involvement with the Youth Council, many young members of the sit-in movement had the opportunity to join the march and experience firsthand perhaps the most famous speech in history.

“When you see young people now and you say, ‘I was there,’ you become an instant celebrity,” Henderson said.

Like Jeffries, Jackson has returned to the site of the march. She has found the exact spot on the mall where she stood more than 50 years ago. Taking part in the march was a priceless experience for her and so many others who participated in it.

The gravity of King’s speech and the rush of marching shoulder to shoulder with an army of people dedicated to the same cause has never left her. The memory is a reminder of the power in history as a guide. Henderson believes that if Luper were alive today, she would still have a list of things to accomplish toward the goals of civil rights and racial equality.

Luper is no longer around to organize marches or take calls from civic leaders between the white walls of her living room. It is up to others to keep her will and legacy alive.

“It’s important because we have to continue to tell the story so we don’t repeat the story,” Henderson said. “I tell people all the time that we’re moving forward but we’re moving backwards.”