Vito's Ristorante serves up Italian food with a welcoming atmosphere

Meatballs seem like the simplest things in the world until you try to make them.

There are a few ways to make a good meatball, but there are infinite ways to screw one up. They require the right blend of meats in the right proportions. Work the meat too much and the meatballs become tough and chewy. Put in too much liquid and they crumble before they’re done cooking.

Should meatballs be baked? Simmered? Sauteed? Some combination of the three?

This is why I turn to experts like Vito’s Ristorante, 7521 N. May Ave.

Vito’s is a neighborhood Italian restaurant with a gourmet feel, but it flies under the radar a bit. Though favorites Belle Kitchen and La Baguette Bistro are just a stone’s throw away, garnering more attention, Vito’s has a dedicated clientele.

Sit and watch owner/whirling dervish Cathy Cummings bounce from table to table, giving diners personal attention. If it seems like she knows everyone, you’re probably not too far off, considering she ran for lieutenant governor a couple years ago.

The tables, chairs and walls must have absorbed an enormous amount of enthusiasm and warmth over the years, because everything about Vito’s feels inviting, down to the bread on the table.

If a very garlic-infused oil and balsamic vinegar aren’t enough to tide you over, the appetizer menu is a small selection of tasty options. If you’re steering clear of fried foods later in the meal, I recommend the calamari ($9.95). Tender pieces of squid are flash-fried to retain their delicate texture without becoming chewy. The dish is served with Cathy’s sugo, which is the restaurant’s juicy and vibrant red sauce. It’s an excellent starter to share and a good way to introduce otherwise seafood-averse friends to the joys of squid.

If there are any picky eaters at the table, steer them to chicken spedini ($16.95).

Spedini, also spelled spiedini, is a traditional Sicilian dish in which meat is rolled into balls, dipped in batter and skewered before it’s cooked. Vito’s version uses marinated chicken breast strips that are seasoned with breadcrumbs and grilled.

The chefs brush an amogio sauce on top of the skewer of meat, giving each bite a bit of crunch and a slightly tangy flavor. Amogio is fairly simple concoction of olive oil, butter and lemon juice with a variety of seasonings, and it brings the spedini to life.

Eggplant is a pretty versatile fruit, though you might not realize it. It’s the main ingredient in baba ganoush and plays a big role in ratatouille. It’s also a great way to add heft to soups.

But one of my favorite preparations is red-sauce Italian recipe eggplant Parmesan ($15.95). Watch smiles spread across the restaurant when the server at Vito’s walks a giant plate of eggplant Parmesan through the dining room. There’s a mix of happy recognition and a tinge of jealousy as customers think, “Next time, I’m getting the eggplant.”

Vito’s eggplant Parmesan includes four thick slices of the fruit, which has been breaded, fried and covered in sugo and mozzarella; a side of vegetables; and a generous helping of pasta. It’s a mountain of food, but that’s part of the fun of Italian cuisine. Eat until you’re full, and then eat a little more. Lean back in your chair and smile at your companions as the satisfaction washes over you.

While chicken or veal versions of the dish might weigh one down, eggplant is actually pretty light, so any overly full feelings will fade quickly. Don’t expect to taste much of the eggplant, though. This dish is really about the breading, the sauce and the cheese, and Vito’s skimps on none of it.

But if you’re craving meatballs — and you should be, if you’ve ever had a great one — Vito’s is the place to be.

There’s Fat Tony’s Pasta Special ($10.95), which is a heaping portion of your choice of pasta covered in sugo. Meatballs are $4 more and worth every penny. Cathy’s sugo is a little sweet, which balances out the bold, acidic punch of the tomatoes and draws out the flavor of the herbs. The meatballs are a perfect addition, holding their shape until they meet the edge of a fork and then soaking up the sauce. 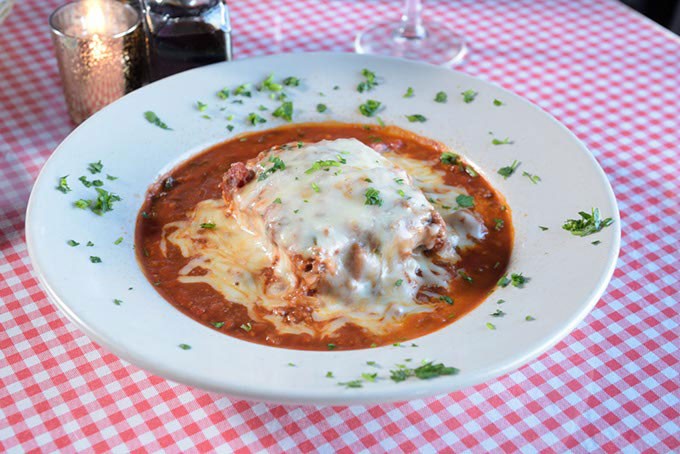 Meatballs can also be found in lasagna ($15.95) in place of spicier Italian sausage. Nominally hidden beneath the long planks of pasta and copious amounts of melted mozzarella, the meatballs give the dish a slightly lumpy look, so your fork can easily find them.

Vito’s lasagna proves Garfield the cat right once again. There’s nothing better than sinking a fork through layers of sauce, cheese and pasta and coming up with chunk of tender, beefy meatball. Also, Mondays suck.

Well, they suck if you’re not going to Vito’s, where they serve one of the tastiest tiramisus ($8) in the city.

Tiramisu is a melange of tasty ingredients that must be put together just right to make an outstanding dessert. If the ladyfinger cookies soak in coffee too long, they become wet and mealy. If the mascarpone cheese is too thick, the dessert will be heavy. Too much sugar makes it insipid. Too little leaves the sweet tooth unsatisfied.

The only problem with Vito’s tiramisu is that I shared it with my friends. It was a perfectly light dessert, nicely sweet without being cloying and had the ideal mix of coffee and chocolate.

It was a great end to a great experience, which is the norm at Vito’s. The food is excellent, the staff is warm and welcoming and the atmosphere is charming and lively. Go in and see for yourself. You just might become a regular, too.

What works: The meatballs are a delight, and the tiramisu is one of the best in the city

What needs work: Service is fast, but sometimes they clear plates too soon.

Tip: Owner Cathy Cummings knows her fish, so keep an eye out for daily specials.