Del Crest Middle School students take civic lessons to the streets with their mission to register 200 residents to vote in November’s statewide elections. 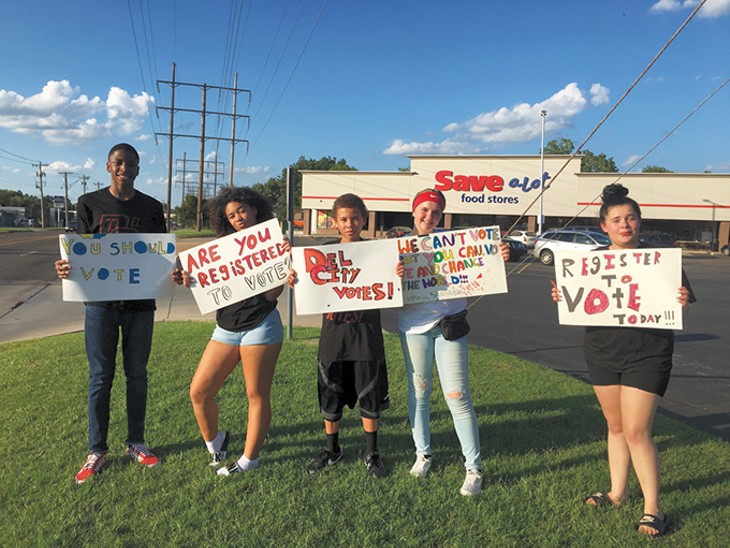 Aaron Baker’s eighth-grade civics class at Del Crest Middle School is a lively bunch. The average student is 13, that special age where the brain begins to grasp complicated issues but has not yet been worn down by society’s cry for political correctness or the need to be overly polite or apologetic. Thirteen-year-olds are, in a word, honest.

“When you don’t vote, you get a bad president,” student Sidney Priest told visitors of a Save-A-Lot grocery store in Del City one September weekday after school. “I know a lot of people here like Donald Trump, but that’s the truth whether you like him or not; when we don’t vote, we get bad leaders.”

Since August, Priest and her civics class classmates have been working hard to register Del City residents to vote in Oklahoma’s upcoming November elections. The initiative is part of their class’ project, Del City Votes, founded by Baker, who teaches U.S. history and a civics course titled Local and Global Citizenship Civics.

“A lot of what we’re doing with this project is typically reserved for juniors and seniors in high school who are about to reach the legal voting age,” Baker said. “It makes logical sense for them to learn about civic responsibility, but I believe these lessons need to be taught a lot earlier.”

Priest and classmates Michelle Rooks, Terry McMorris, Keiana Burden and Colin Gaines, among others, have gone to public places like grocery stores on an almost weekly basis in an effort to sign people up to vote. Their faces glow in the dawning summer sun, and their enthusiasm is hard to hide, despite receiving some pushback.

“I think a lot of people look at us like we are just some dumb kids,” Gaines said, “like we don’t really know what we’re talking about. I know I have a lot to learn, but I also know how to do this; our teacher taught us how to do this.”

With confidence, Baker’s students ask passersby if they’d like to register to vote. They then help each willing participant fill out a voter registration form. Baker submits newly completed forms to the State Election Board weekly.

Sometimes, Baker said, the honesty of the young isn’t enough to convince the old.

“There are some people who have a hard time understanding why they should take advice on voting from someone who’s not even old enough to vote,” Baker said. “Part of this project is reminding older generations that there was a time when they too believed they could change the world.”

Every time the group takes their classroom to the community, they learn something new, Baker said.

The group has already received several “no, thank you”s from convicted felons who are ineligible to vote, Baker said.

“I could tell them that in the classroom,” Baker said. “But for them to hear it from a person who’s living that reality is totally different.”

The educational organization Teaching Tolerance awards grants to public school teachers who propose projects that would allow for students to learn the values of diversity and tolerance in new and innovative ways. In August, the organization donated $750 to Baker and his Del City Votes initiative.

Baker, a native of Arkansas, said he has called Oklahoma home for over a decade. While his formal education in theology and seminary school called for him to pursue a career in the church, Baker said the desire to make a difference in the lives of young people from every religion, race and culture appealed to him.

He attained an alternative teaching certificate and settled down with his wife and three children in the Sooner State. He is a firm believer in taking the classroom to the community, and his passion is community-building.

“You can teach a 17-year-old how to vote,” Baker said. “But for them to understand why they should vote and why it’s important to be a part of their community, teaching has to begin way before 17.”

He hopes more classes and subjects will be taught using techniques that allow students to experience learning in the real world.

For now, Baker said, his students have a long way to go to meet their goal of registering 200. They have a little over a dozen registered voters so far.

“We’re going to keep going, and if we don’t meet that goal, that’s OK,” Baker said. “Every vote matters.”

Baker said this year’s November elections are crucial for the state of Oklahoma and he hopes voters will consider voting for candidates who advocate improving Oklahoma’s public schools.

“I think folks from both parties are agreeing that education is one of the biggest issues during this year’s elections,” Baker said. “Pay raises were important, but they should represent a first step in an initiative to repair our public schools.”

He hopes to see newly elected officials work to restore state funding for education so schools like his will be fully staffed and eventually equipped to compete with those in neighboring states like Texas.

But more than hope for change, Baker and his civics class students said they will help people vote to make sure it happens.