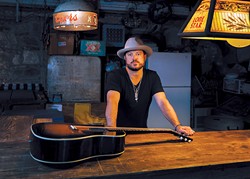 If home is where the heart is, it makes sense that Wade Bowen would look to his Texas roots for what may be his best and most personal album to date.

Solid Ground, released Feb. 9, is the red dirt country crooner’s 11th studio album and his first as an independent artist on Nashville’s Thirty Tigers record label that has also put out alt-country gems from Lucinda Williams, Jason Isbell, Sturgill Simpson and Oklahoma’s own Parker Millsap. The album debuted at the No. 1 spot on Billboard’s country albums chart and in the top 10 of its independent albums ranking.

Bowen — who was born in Waco, Texas, and attended college at Texas Tech University in Lubbock — performs March 24 at Grand Casino Hotel & Resort’s FireLake Arena, 18145 Old Rangeline Road in Shawnee. The show also features the Josh Abbott Band, another Lone Star State bunch with roots that can be traced back to the Texas Tech campus.

Solid Ground can be seen as a formal reintroduction to Bowen after a short stint on the Sony imprint BMA Records, for which he released one album, 2012’s The Given. Bowen put out an independent, self-titled record in 2014 but, in a recent interview with Oklahoma Gazette, said he feels Solid Ground is his first solo country record to properly capture his essence as an artist and songwriter.

Bowen worked closely with Austin producer Keith Gattis to craft Solid Ground, a project that is a simultaneous tribute to his home state’s colorful music heritage and a reflection on his personal history within the expansive territory. The album features vocal appearances from Miranda Lambert, Jack Ingram and John Randall.

The singer-songwriter spoke with the Gazette about his relationship to Oklahoma, the richness of Texas music culture and how writing Solid Ground pushed his artistic limits.

Oklahoma Gazette: Solid Ground is a very Texas-centric album. But growing up in Texas, what were your thoughts on Oklahoma? Was there any kind of state rivalry in your mind?

Wade Bowen: I don’t know. I didn’t really visit Oklahoma at all until I got into college. I just never had a reason to. Growing up as a kid, Oklahoma really wasn’t on my mind a whole lot, but once I got into college and started playing with my band and everything, one of my first road trips was to the original Wormy Dog [Saloon] in Stillwater, and we kind of made a home out of that. We started playing Oklahoma quite a bit in college, and I just fell in love with it. I always have a blast whenever I go to Oklahoma.

OKG: You play here quite a bit, it seems.

Bowen: Yeah, we have a decent following there, and I have a lot of connections with Oklahoma, just a lot of friends. The music, to me, runs hand-in-hand. The Oklahoma and the Texas scene, they are different from each other, but they still have a common thread and love in between them. [Yukon native] Cody Canada and I married sisters, so that’s another strong connection for me. I love to give back to Oklahoma; I think the state has a huge passion for original music. We try to get back there as often as possible.

OKG: When you do come back here for this show coming up, it will be with the Josh Abbott Band, another Texas group that a lot of Oklahomans love.

Bowen: Yes, we’re bringing Texas to Oklahoma. I know there’s a pride factor between Texas and Oklahoma where music is concerned, but I love how they also both embrace each other and really accept each other. I just spent the last couple of weeks playing with Stoney LaRue, and he’s one of my dearest friends in the world. The music is pretty different from each other, but at the same time, it’s pretty similar. Both states embrace each other to the point that it’s like one big state, in my opinion.

OKG: Solid Ground is a great reminder of how rich the Texas sound is. There’s so many types of music that come out of that state. You have rock influences on here and country, Americana, Tejano.

Bowen: Yeah, we tried really hard to do that. When we set out to make that so-called “Texas-sounding” record, to me it wasn’t about saying Texas every other word and hammering that sentiment home. It was about capturing the sound that comes out of Texas. It’s Tejano and blues and country and rock and all of that mixed into one. It was really important for me to touch all bases on that, and I think we did. It has some grit and some swagger to it that I’ve never had before.

Bowen: Well, I’m sure I do, but I don’t remember them. That song actually was written by my producer Keith Gattis. He brought it to me and asked if I wanted to help him finish it. I laughed and I said, ‘This thing’s finished; let’s just go record it.’ It mentions Lajitas, Texas, in there, which is a beautiful, beautiful spot in way west, southwest Texas — right on the border. Keith and I have a great memory of playing a festival there and hanging out. I’m sure that’s why he thought of that, and that’s why I relate to it so much. 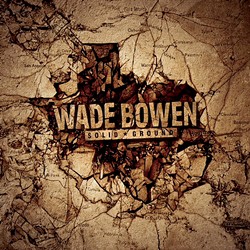 OKG: I read that you asked Gattis to push you from a songwriting perspective. What led you to ask him to do that?

Bowen: I think it was me just not wanting to settle for making another record. It’s easy to do that when you’ve been doing it for 20 years — grab some songs, go into the studio and make an album. I really wanted to dig deeper than that and find myself again, coming out of a major record deal. It was a way to reinvent myself — a ‘where do I go from here’ kind of thing. [Gattis] understood that sentiment because he’s been there before. He’s a great songwriter and really knew how to push me, and it really worked. He really did push me to the brink and beyond. It was a really difficult process and he was really hard on me. You start questioning whether or not you’re doing the right thing, but all of the sudden you come out on the other side as a better writer and a better artist.

OKG: What was the hardest part of it?

Bowen: I think the hardest part was him telling me to keep writing even though I felt like I had already written a lot of really wonderful songs. He doesn’t really let you finish the album until the album is finished. That’s pretty rare these days. Normally you have a game plan for when you go into the studio on what you’re cutting. With him, I had no clue. He did, but I didn’t. It was very Mr. Miyagi of him to just let me trust him to do it.

OKG: Is this the most work you’ve ever put into an album?

Bowen: By far. It’s the most work I’ve ever put into the recording process, the writing process and to the promoting process. I’ve never worked this hard on an album and we’re doing all we can to get it out there. Hopefully it takes off. I really feel like it’s the best album of my career and it’s really cool to say this far in [to my career] that I’m still getting better, hopefully.