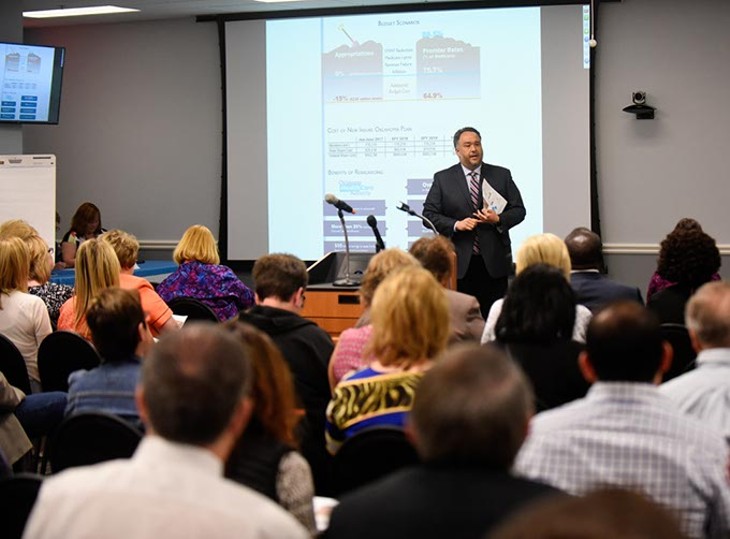 The proposal, which could take effect June 1, will weaken and eventually destabilize the state’s health care system, said Nico Gomez, the authority’s CEO.

As head of the state’s Medicaid or SoonerCare program, Gomez acknowledged the pushback the agency received following the late March budget cut announcement. Emails and phone calls Gomez received bluntly stated that hospitals would be forced to scale back services, physicians would be unable to serve SoonerCare patients and nursing homes would close their doors.

“If we are not able to prevent or restore Medicaid provider rates as soon as possible, it will destabilize the health care system,” Gomez said April 7 to the crowd gathered at the authority’s Oklahoma City office.

“The system is hurting. People are hurting. Families are hurting. We are not going to solve all of this with this,” Gomez said, referring to the authority’s recently crafted Medicaid Rebalancing Act of 2020. “We can prevent a lot of future pain if we do it right.”

The authority unveiled the Medicaid Rebalancing Act of 2020 to the public April 7, a week following its initial introduction to Gov. Mary Fallin and legislative leaders.

Under the act, OHCA calls for the Legislature to apply for a State Innovation Waiver, commonly called the Section 1332 Waiver, available through the federal government’s Affordable Care Act (ACA). The waiver allows states to avoid many ACA provisions and offer tax credits to help pay premiums. Essentially, Oklahoma creates its own plans but gains federal funding. The waiver takes effect at the beginning of 2017.

With the waiver, Oklahoma would transfer 175,000 SoonerCare patients to private insurance through Insure Oklahoma. The measure would mostly impact women and children in families that earn more than 133 percent of the federal poverty level. Both state and federal funds would facilitate the expansion of Insure Oklahoma, which receives federal Medicaid dollars.

Additionally, the plan calls for restoring provider rates back to the 86.5 percent Medicaid rate.

Although the plan calls for utilizing an ACA waiver, Gomez said it was not a Medicaid expansion.

The proposal comes with a $100 million price tag. Gomez suggested lawmakers consider a $1.50-per-pack tax on cigarettes to finance the plan, as his agency services a high number of tobacco users.

“My suggestion is let us use the revenue that tobacco companies make from selling legal products to help offset the cost of care that is going to be required to take care of [tobacco users] long term,” Gomez said. “Let’s make sure we have a system that will be there when they need it. I think the cigarette tax is not unreasonable in these circumstances.”

The approach would reduce the state’s number of Medicaid patients by 22 percent, according to authority estimates.

Oklahoma Hospital Association, which has repeatedly called on lawmakers to expand Medicaid, endorsed the authority’s plan.

“We also strongly urge legislators to act now to restore funding for Medicaid by raising the cigarette tax by $1.50 per pack,” Craig W. Jones, the association’s president, said in a media statement. “With Oklahoma facing a monumental budget crisis and health care systems in the state crumbling, it is imperative lawmakers show courage and find the money needed to save health care and save lives. Raising the cigarette tax is a reasonable solution to help address a life-threatening problem that is growing daily. Further cuts to Medicaid would be catastrophic for the people of Oklahoma.”

Gomez agreed. The authority’s proposal stands alone, as no other options are before lawmakers.

“We decided we can no longer continue down this road until we get to the point where the whole system just breaks,” Gomez said. “We had to provide an option.”

What is the Medicaid Rebalancing Act of 2020? Proposed by the Oklahoma Health Care Authority, the plan calls for state lawmakers to pursue a Section 1332 waiver, which is available under the Affordable Care Act (ACA). In addition to preventing cuts to or restoring Medicaid provider rates, the plan transfers 175,000 adults between the ages of 19 and 64 years old who earn less than 133 percent of the federal poverty level to the state’s Insure Oklahoma program. A Medicaid-funded program, Insure Oklahoma would allow those former SoonerCare members to receive private health insurance with available tax credits, although modest premiums and copays can be expected.

What is needed to make the plan a reality? It is estimated that $100 million is required in state funding for the Oklahoma Health Care Authority to proceed with the act. To create the needed revenue, authority CEO Nico Gomez suggested lawmakers approve a $1.50-per-pack tax on cigarettes.

Would Oklahoma receive federal dollars? Yes. Under the act, Oklahoma would contribute $26.4 million and the federal government would kick in $502.2 million during the program’s first six months. The share of the cost would gradually increase over the years with Oklahoma paying $105 million, and federal dollars reaching just under $1 billion in 2020.

Would other state agencies benefit from the act? Yes. The act is a joint effort among the Oklahoma Health Care Authority, Oklahoma State Department of Health and Oklahoma Department of Mental Health and Substance Abuse.