With the statewide teacher walkouts over, attention turns to elections, in which dozens of educators are candidates.

The moment Lauren Richter, a fifth-grade teacher in Shawnee, decided to run for office came during the fourth day of the statewide teacher walkout, when educators and their allies continued to demand additional funding for public schools.

Educators filled the state Capitol to capacity. Thousands of teachers remained outside the building.

“There was no one getting in, and very few people were leaving,” Richter said. “We would just be sitting on the lawn. I felt — and I hate to use this word — useless. The best that I could do was to sit on the lawn. I started to grade papers, but I thought there had to be something else I could do.”

That thought took Richter back to conversations from months earlier in which she and her husband discussed the possibility of her campaign for Shawnee’s House seat. Richter decided to act. A Facebook post let her friends and family know that she was in.

“I felt what it’s like to not have a voice,” Richter said of her experience outside the capitol. “I knew I could make a difference outside of my classroom. That has really been my motivation to try and make it better outside and inside the classroom.”

It’s clear the tides have turned in Oklahoma politics, especially since the Sooner State has faced some of the deepest cuts to public education in the nation, leading to teacher layoffs, elimination of extracurricular programs, overcrowded classrooms and even some districts turning to four-day school weeks.

For nine days, thousands of teachers walked away from their schools and gathered at the Capitol to advocate for additional classroom funding. When the walkout ended on April 12, $479 million was secured in education funding, short of the $506 million goal placed by OEA in March. The largest piece of the funding legislation — teacher and support staff raises — passed before the walkout.

“We have members and entire locales that are now re-energized,” said OEA president Alicia Priest in an interview with Oklahoma Gazette six days after the end of the walkouts. “They understand they’ve been a sleeping giant in politics. Now awakened, they are ready to step into the power that they’ve always had, using their voices to advocate for themselves and their students.” 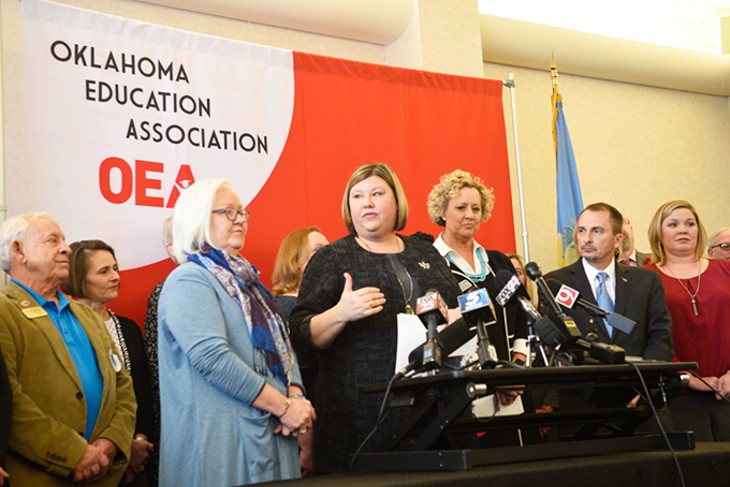 The 2016 election cycle produced an unofficial “teachers caucus” for legislative seats. The more than two-dozen education candidates were fueled largely by frustrations with multi-millions in state education cuts and a desire to represent the interests of public education at the Capitol.

The 2018 election cycle feels different for education candidates. While many remain motivated by the same issues, teacher candidates are also energized from the walkout and teachers winning races in special elections in Oklahoma. Last summer, east Tulsa County voters elected retired teacher and Democrat Karen Gaddis, who had previously lost to Rep. Dan Kirby months earlier, to a House seat. In September, a Norman House seat went to middle school teacher Jacob Rosecrants, a Democrat who also had run before.

OEA has 27 members running for House seats and six vying for Senate spots. There could be more education candidates running. Most likely, there will be candidates who push public education as a top issue.

Within a week of announcing her campaign on Facebook and as the teacher walkout came to an end, Richter was heavily involved in her campaign, attending back-to-back training sessions, the first with Oklahoma Ethics Commission and the second with the Democratic Party. The following day, at her first candidate meet-and-greet at Shawnee Public Library, Richter listened as locals expressed frustration with various areas of state government.

Richter said her campaign goes beyond finding solutions to restore public education. She’s concerned about severe cuts to mental health services and holds an interest in criminal justice reform. In the June 26 primary, Richter faces two other Democrats vying for the House District 26 seat that encompasses all of Shawnee. Republicans have put up three candidates, including incumbent Rep. Dell Kerbs, a local business owner.

It’s a long road to the June primaries and an even longer road to the November general election. OEA seeks to keep political momentum going among members. Now through the end of the legislative session, teacher lobbying teams are visiting with lawmakers to advocate for long-term solutions to public education funding. Back in their communities, members host forums and coffee talks to discuss legislative issues.

These efforts could culminate in a voting-ready teacher block as well as teachers ready to advocate for an additional $230 million in education funding during the 2019 Legislative Session, the next step in OEA’s Together We’re Stronger campaign.

“That was part of the focus from the beginning, to ensure that our legislators understood that the first year ask was the first of a three-year plan,” Priest said. “It took 10 years of cuts to get to where we were, and we cannot slide back. We can’t do that to our kids ever again. Our future depends on funding education.”