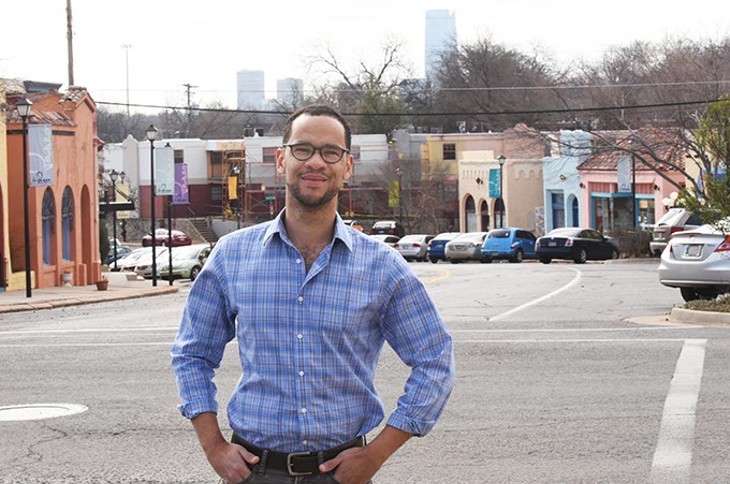 James Cooper rubs his hands to shake off the cold and orders a plain coffee.

The barista at The Red Cup says, “Hi, James,” and hands him a mug.

In this Ward 2 hangout, where the clientele is a mixture of working class men in coveralls, beat poets scribbling in worn notebooks and a few college students fighting the urge to surf Facebook, Cooper discusses his candidacy for Oklahoma City Council and how the diversity of this urban Oklahoma City ward makes him feel at home.

Cooper doesn’t like labels, but in the world of modern politics, they can be hard to avoid. Cooper is openly gay, African-American, a millennial and a bit of an optimist. On a council that is still mostly white older men, Cooper’s election would add some new labels to the group.

“I believe that my base is young people, LGBT folks, senior citizens, women, African-Americans, young professionals, all types of people,” Cooper said. “Maybe I’m being just too optimistic, but I think we are all invested in this city’s future, no matter the demographic, and I relate to them all.”

Hearing Cooper, 32, talk about his platform for the city, it’s hard to find too many policy differences between him and Councilman Ed Shadid, who currently holds the Ward 2 seat. Cooper claims the difference is in his tone.

“Where Ed lacks vision, I have one,” Cooper said. “Where he says ‘No, because,’ I say ‘Yes, if.’ He has created divisiveness and unnecessary conflict. I have a different approach.”

Like Shadid, Cooper promotes increased public transit and construction of sidewalks and advocates for the working class and poor. Cooper said he also, like Shadid, has some concerns about the growth of tax incentives for businesses and other developments but believes he has a less confrontational approach than his opponent.

Shadid’s campaign for mayor last year exposed his vulnerabilities in a citywide race, but he recently demonstrated his popularity with a base that includes some of the city’s more liberal residents. Shadid is officially a political independent, while Cooper is a Democrat. The city council elections are officially nonpartisan.

It was during his time at OSU and his role as opinion editor of the school newspaper that Cooper said he learned how to communicate who those who have different political opinions, a skill he said would play well on the council, especially if he is one of the more left-leaning on the horseshoe.

“I was running the O’Colly’s opinion page and made an effort to look for diverse voices,” Cooper said. “I learned that I couldn’t rewrite my conservative’s op-ed. My only job was to help them better articulate their vision. That taught me how to listen better. That’s what I will be able to bring to the council.”

Cooper said he supported Shadid’s council campaign in 2010 but grew disenfranchised when he saw continued skepticism toward the city’s most successful projects.

“All I heard were criticism, and I kept waiting for the pivot, and the pivot never came,” Cooper said. “I have a different approach.”

This is the first part of a series that will profile each candidate for Oklahoma City Council in the three contested races. The election is March 3.