Waldrop, 63, is running for Oklahoma City Council in Ward 6, which includes downtown, Capitol Hill and many other neighborhoods in the city’s core. 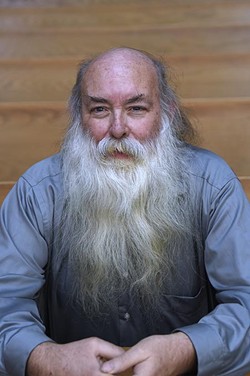 “I sometimes joke that my cardiologist was concerned that my blood pressure rises whenever I read the newspaper,” Waldrop says with a sharp laugh, offering a fictitious reason for his city council campaign.

Waldrop, 63, is running for Oklahoma City Council in Ward 6, which includes downtown, Capitol Hill and many other neighborhoods in the city’s core. As music director at Epiphany of the Lord Catholic Church in northwest OKC, president of the Oklahoma Food Cooperative and founder of the Archbishop Oscar Romero Catholic Worker house, Waldrop has plenty to keep him busy. But he said a run for council is a chance to increase his impact on the community.

“One of the things in the Catholic Worker [movement] is if you see something that needs to be done, spend less time trying to get someone else to do it and do it yourself,” Waldrop said.

Waldrop believes the city’s growth has mainly benefited the elites, while those living in poverty have continued to suffer without a voice at city hall. He has ideas on how to redirect some tax incentives and capital projects to those neighborhoods most in need.

“The last bond issue had a pretty hefty chunk of money for economic development,” Waldrop said about the 2007 general obligation bond and the inclusion of incentives for companies moving to the city. “That’s fine, but I think we ought to have maybe $10 million to set up a program to fund micro-enterprises for low-income people that could turn into jobs for low-income [residents] and their own businesses. I think there are a lot of things that could be done to help those in need.”

Waldrop believes the city can not only help the poor but also serve as a catalyst for bringing together organizations to do the same. While knocking on doors on the campaign trail last month, Waldrop said a resident complained of prostitution in his neighborhood.

“If I get elected, I’m going to write the Catholic archbishop, the head of the Baptist Association, the Methodist bishop, the Nazarene superintendent, the Oklahoma Conference of Churches and I’m going to say, ‘Hey, my brother and sister Christians, there’s a problem of prostitution in this town ... and until we can offer them an alternative, it's going to continue. And I think it's our job as Christians to do that, so let's have a meeting and figure out how to do that,’” Waldrop said.

Waldrop has run for office before, including a mayoral campaign in 2006 that he admits was not a realistic bid. This time, he is looking to win, and while he understands a victory would most likely put him in the minority on many issues related to tax incentives and urban development, he views the council as a platform on which to speak on behalf of the less fortunate.

“I’m going to have a little bit of a bully pulpit [if elected],” said Waldrop, leaning his head back with a laugh.

This is the first part of a series that will profile each candidate for Oklahoma City Council in the three contested races. The election is March 3.