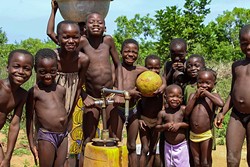 The threat of water scarcity abroad and at home is leading one Oklahoma nonprofit organization to raise awareness and capital for preservation efforts.

The lack of water has led Ray Stevens, chief executive officer of Oklahoma-based global water conservation nonprofit Water4, to refer to water as the new gold. Stevens said the lack of water is not just a problem in developing nations like Africa and Latin America but in Oklahoma as well.

“What it means to us, it’s opened the conversation to the role water plays in our world,” Stevens said.

Oklahoma has suffered from short- term water issues for years. The state is in a four- to five-year prolonged drought, Ken Ward, assistant director of external affairs at Oklahoma Department of Environmental Quality, said.

The western and southwestern areas of Oklahoma are currently suffering from “extreme” drought and “exceptional” drought conditions, according to climatologists at the Oklahoma Climatological Survey.

Oklahoma water supplies are running at historic lows, Ward said. He indicated that cities are running out of water from their main supplier and having to look elsewhere for other suppliers.

“We have had areas in the western part of the state that rely on some of the reservoirs out there. They are now looking at groundwater, and it’s hard to find,” he said.

Other concerns in Oklahoma include the quality of accessible water due to an aging and decaying infrastructure system in many rural communities, Stevens said.

“It’s something the entire state is needing to look at, what environmental factors are starting to create stress upon the environment,” he said.

One of the ways the Oklahoma Department of Environmental Quality is looking to reduce water needs is by substituting potable water with retreated wastewater.

“Instead of sending it into a river or possibly a lake, you reuse it on the golf course or an industry where, prior to that, they may have been using drinking water,” Ward said.

Another way to conserve water usage is through rationing. This summer, Oklahomans were forced to ration due to water restriction.

“If you don’t conserve, you’re generally going to see it in your utility bill, because your utility is going to have to figure out a way to find more water,” Ward said.

While the idea of water rationing seems simple in theory, just having people water their lawns every other day conserves peak water usage.

According to Ward, Oklahomans need an overall knowledge of where they get their water and how important it is to pay attention to their water bill when it comes to conserving water.

» Approximately 73 percent of this water was used for crop irrigation and municipal/ industrial combined, Oklahoma’s two largest water use sectors.

Water woes: Water is the new gold according to one local nonprofit group.