Waxahatchee storms into Oklahoma City with a Tower Theatre appearance 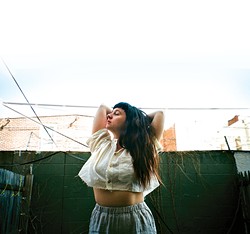 Waxahatchee’s Out in the Storm burst onto the music scene in July like a gale-force wind. Ditching the lo-fi elements found on most of the project’s previous releases, Crutchfield’s latest provides some of her finest moments of lyrical clarity without sacrificing any impact. In fact, recording with a full band gave the record a large and full sound that only serves to strengthen her songs’ power.

Outside Waxahatchee, Crutchfield is known for P.S. Eliot, a duo she shared with drummer sister Allison, who now is vocalist and guitarist for the band Swearin’.

Crutchfield has also kept busy with a number of other projects since her most recent release, including a pair of Jason Molina covers with friend Kevin Morby (known as frontman for The Babies) as a benefit for the MusiCares foundation and a vocal appearance on the first Superchunk full-length in nearly five years, What A Time to Be Alive.

Oklahoma Gazette recently spoke to Crutchfield about writing for Out in the Storm and her other most recent work.

Oklahoma Gazette: Out in the Storm was great. Some people have described it as one of your most autobiographical albums to date. Do you agree with that assessment?

Crutchfield: No, not really. There are a lot of ways in which people have described it really astutely and it’s really left me with some pause, just because it was described more astutely than even I could describe it. But that one kind of confuses me, only because all the albums are really autobiographical. There isn’t really one that isn’t. I think the reason people say that is that the lyrics are pretty visceral. Like, the tone is different. It’s more immediate; there’s more heightened emotion. The other ones were coming from this place of fatigue or almost depression. This one is more immediate. It strikes people that way because the lyrics hit a little harder and it’s more in-your-face.

OKG: There’s also recency bias. Whatever is the latest thing always seems to be the most raw and revealing to date.

Crutchfield: Yeah, that’s just the machine that we’re all a part of. You’ve got to let it do its thing, I guess. If that’s what people want to say, that’s fine.

OKG: One of my favorite songs on the album is “Silver,” which includes the “out in the storm” lyrical reference. Could you explain the Out in the Storm concept and what that means to you?

Crutchfield: Yeah. I wanted to call [the album] one of the lyrics because I always love it when that happens and the title of the record is sort of name-checked in a song. I picked that one, I think, because storms are temporary and being out in the mess kind of implies that there is a light at the end of the tunnel. There’s something hopeful about it. That’s something I wanted to convey on this record. Like, it’s a really, really bad moment where you’re all over the place, but knowing that there is something good to come out of it, it can be a moment you look back on as a turning point or a moment of personal growth.

OKG: When did you write “Silver” in relation to the other songs?

Crutchfield: I wrote the song “Fade” and the song “Never Been Wrong” — so the first and the last song — months and months before the rest of them. Those were two where I was like, ‘Well, these don’t really fit together and I don’t really know what I’m doing.’ Then I had a long stretch at home where I was like, ‘Now is the time; now I’m going to write the record.’ I felt like I had the record ready to go within me. That’s when the other eight were written, and “Silver” was written really early on in that process. The melody I had in my pocket for like a year, and I feel like that’s always kind of my process. I gather all these ideas and melodies and there’s always a couple I’m most excited about, and those are the ones I work on first. “Silver” was that one for me. I just knew that one was going to be really, really good. And the lyrics on that one ended up being the tamest in many ways.

OKG: You’re also on the new Superchunk single “Erasure.” How did that song come to be?

Crutchfield: Well, Merge (Records) is like one big giant family, which I’m happy to be a part of now. But [guitarist and vocalist Mac McCaughan] has always been a mentor in many ways. He’s always kind of walked me through all the highs and lows I’ve experienced since I’ve been on Merge. He just came to me and said, ‘Hey, when you have time, there’s this song I think your voice would sound good on.’ I was out on tour on the first big Out in the Storm tour we were doing. We were coming through Raleigh-Durham [North Carolina] and since I’m really bad with technology and Pro Tools or whatever, I was just like, ‘Can I come to you and I’ll just sing and you can do it?’ So I went to his house and did the song. I was psyched too because I love Superchunk and this, to me, is such a cool, poppy song and record.

OKG: You also recently released a couple of Jason Molina covers with Kevin Morby. What’s the backstory behind those songs?

Crutchfield: Well, Kevin and I like covering songs together, which is evident because we’ve done it a lot to this point. We talked about a handful of covers and tossed some ideas around. It just happens organically between us when we hang out. We bonded over Molina on tour and talked about what it would be like to do “Farewell Transmissions,” because it’s such a crazy beast of a song.

Crutchfield: Right. We ended up running with it and decided to do “The Dark Don’t Hide It” too and just make it a charity thing. We recorded it in October in upstate New York with his drummer Nick Kinsey, who is also a recording engineer and producer. His studio is this incredible farm in upstate. It was really fun, a really laid-back recording experience. We’re all really tight, so it was fun just to be working on something together. We were all excited with how it turned out.

OKG: And it all benefits the MusiCares charity.

Crutchfield: Yeah, MusiCares is really great. It helps musicians get different forms of healthcare. With Kevin, it was really important to him because he had a vocal polyp and had to have surgery to remove it. MusiCares paid for all of that for him. Also, MusiCares had really helped Jason Molina with all of his struggles with addiction, and that’s a really big thing that they do. It’s a huge problem with everyone, but also specifically with musicians. We thought it would be a good charity to give all the money to.